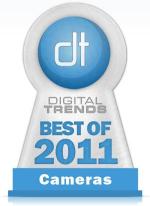 In 2011, digital camera manufacturers have found themselves an entirely new competitor: the smartphone. While camera phones aren’t exactly new on the market, they have gotten incredibly powerful recently. And this means big-brand camera companies have been busy focusing on portability to compete when it comes to size factor, as well as boosting specs to blow these new challengers out of the water.

As a result, we’ve seen a number of mobile-social features woven into entry-level digital cameras, like auto-share, in-camera editing, and GPS. And while those tools might appeal to novice shooters, manufacturers have also kept busy outfitting smaller cameras with larger sensors and new processor systems.

Micro-four-thirds cameras really took off this year, and now every major name (with the exception of Canon) has either released or is rumored to release such a device. We’d be remiss not to mention some of the stylish designs we’ve seen this year as well, with a slew of retro-meets-minimalist looks coming to market.

Over the year, there have been a few stand outs, and here are our favorites among them.

The best point-and-shoot cameras
The best iPhone camera lenses
Save $100 on this Canon EOS Rebel T7 DSLR Camera Bundle for Black Friday
The best digital cameras
Nikon’s new 800mm lens for Z-mount cameras lightens the load
ReelSteady makes GoPro Player ‘reel’ useful for filmmakers
GoPro takes to the skies with the Hero10 Black Bones
How to turn off the camera sound on an iPhone
24 amazing images of our planet for Earth Day
Instagram test lets you pin particular posts to your profile
Snapchat’s pocket-sized Pixy drone takes to the skies
DJI Mini 3 Pro unboxing video drops just ahead of launch
GoPro Hero 10 Black vs DJI Action 2 vs. Insta360 One RS: Clash of the action cameras