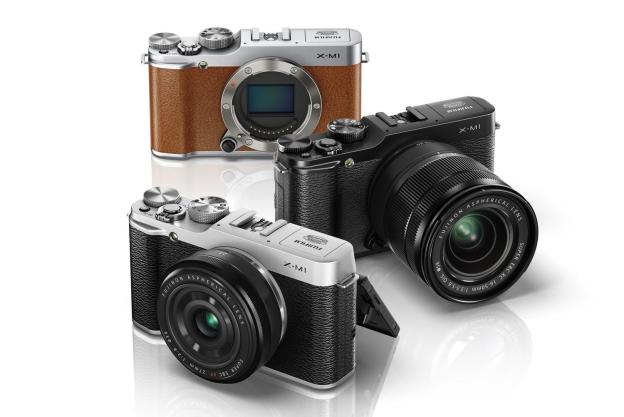 Check out our review of the Fujifilm X-M1 digital camera.

Fujifilm today rolled out its third interchangeable lens model in its X-series of advanced, beautiful retro-styled cameras. The new X-M1 compact system camera features a large 16.3-megapixel APS-C-sized X-Trans CMOS sensor that Fujifilm says will deliver outstanding image quality, plus Wi-Fi. It will be available in a kit bundled with a new Fujinon XC 16-50mm F3.5-5.6 OIS zoom lens ($799) or body only ($699); the camera goes on sale in the July/August timeframe.

The X-M1 is an addition to a lineup that includes the X-Pro1 and X-E1 (the X-series also includes non ILC models). In fact, the X-M1 uses the same X-Trans CMOS sensor found in the other two cameras, but not the newer X-Trans II unveiled earlier this year. There’s no optical low pass filter, which is designed to allow for higher resolution than standard APS-C sensors because the light can reach the sensor surface directly and effectively. The X-M1, however, does utilize the improved EXR Processor II. Using phase detection, Fujifilm says the autofocusing will be fast, as is the startup (0.5 seconds) and shutter (0.05 seconds) lag times. ISO ranges from 200 to 6,400, and an extended ISO range between 100 and 25,600.

Like the other cameras in the series, the X-M1 has an attractive design that harks back to the metal cameras of the 1960s and ’70s. Aimed toward “step-up” users moving into interchangeable lens systems for the first time, the camera is suppose to be easy to use, while offering advanced shooting features. The X-M1 will come in three styles: black, dual-tone silver and black, and light-brown leatherette with silver-accents.

To reach the lower price and small form factor, Fujifilm sacrificed a viewfinder to accommodate the large sensor. Fujifilm also says construction uses less metal, although the build quality is still solid. In lieu of a viewfinder, you’ll find a 3-inch tilting LCD (920K dots) for framing your shots. The camera can shoot videos at Full HD 1080p at 30 frames per second, and record audio using dual stereo mics (there’s no external mic port). Unlike the X-Pro1 and X-E1, there’s Wi-Fi in this new camera, which lets you transfer content to a smartphone via the Fujifilm Camera Application for iOS and Android; a Wi-Fi button lets you directly enter the function. For casual users, there are filters and film-simulation modes for you to play with.

The XC 16-50mm lens will only be available as part of a kit. The 24-76mm (35mm equivalent) is lighter and has a more plastic construction when compared to Fujifilm’s XF lenses; it’s fine if you’re starting out, but you’ll probably want to graduate to a faster lens in the future.

Also announced today is another new lens, the Fujinon XF 27mm F2.8 (shown below). This fixed focal length lens is compact (23mm in length) and lightweight (2.7 ounces), and its f/2.8 aperture is designed to deliver beautiful bokeh and shallow depth of field. There’s no aperture ring, so you’ll have to adjust it in camera.

The X-M1 will be available in July in black and silver, as a kit or body only. The brown model will debut in August, body only.

GoPro Hero 11 Black leak suggests a moderate upgrade
Netflix sheds light on its ‘approved cameras’ for filmmakers
Insta360’s next camera could be amazing for lowlight photography
It’s the last day of Newegg’s huge flash sale!
Vloggers, Nikon has built a new camera just for you
Best 4th of July sales still available — save on TVs, Apple and more
Best Prime Day Drone Deals 2022: What to expect this week
How to remove the background from an image
Instagram boss says to expect even more video content
6 awesome Earth images captured from the ISS in July
This GoPro Hero 10 bundle is $100 off at Best Buy today
The best iPhone tripods for 2022
Watch this Mavic 3 drone soar above the world’s highest mountain