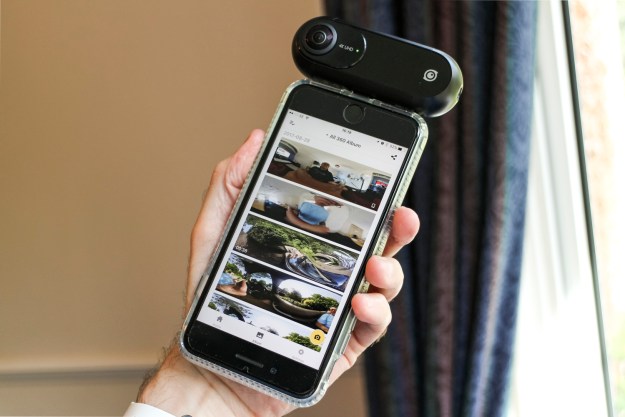 “Versatile, simple to use, and reasonably priced, the Insta360 One opens up a whole world of 360-degree creative photographic opportunity to the masses.”

Shooting photos and video should be fun. It’s an aspect we look for in our smartphone reviews: Does the camera inspire us to go out and take a picture, and then actively make us think of ways to use it better? We want the answer to be yes. In our Insta360 One hands-on review, we find out the company’s new 360-degree camera has ticked that box. Insta360’s no stranger to 360-degree cameras, and we’ve already checked out the Insta360 Air and the Insta360 Pro cams. The Insta360 One almost combines the two into a single camera, providing 4K-quality 360-degree video with plug-and-play simplicity.

It’s an iPhone-compatible camera, with a clever foldaway Lightning connector in the side, ready to connect to your phone. Attached like this, it operates in a similar way to the Insta360 Air, and can be used for stills, video, and 360-degree live-streaming through Facebook, Periscope, and other platforms. However, with the universal tripod mount on one end, it can also be attached to a selfie stick, a tripod, a helmet mount, or even a drone, greatly increasing its versatility. The included protective cover doubles as a small stand too.

It’s about as wide as the iPhone 7 Plus, but several times thicker. It adds considerably to the weight of your phone when it’s attached. Its size and shape is reminiscent of the LG 360 Camera , meaning you’ll probably want to carry it around in a bag, and not in your pocket.

Because the Lightning connector is at the bottom of your phone, the Insta360 app rotates 180-degrees, reminding you to hold the iPhone upside down when using the camera. It takes 24-megapixel stills and will shoot 4K, or 3,840 x 1,920 pixel, video. It has an HDR mode, a manual mode, and Bluetooth for remote control.

If the selfie stick is a blight on society, then the Insta360 One’s flying camera mode is its revenge.

In our brief trial of the Insta360 One, we tried out video recording from a moving vehicle, and an innovative “flying camera” mode, where a drone isn’t needed to create the unique effect of a camera zooming around you. A button on the side turns the camera on, and an LED lets you know everything is up and running. A double-tap of the same button starts recording video.

We shot in 4K and were impressed with the clarity on the phone’s screen, but mindful it was showing it at a lower resolution, and found the six-axis image stabilization worked well at making in-car footage smooth and stable.

Our footage was recorded on a very sunny day, and the camera coped with the changing light conditions extremely well. This was a negative aspect of the Insta360 Air, but has been greatly improved here. With the recording complete, the camera is plugged into the phone, and the footage synced across. From the app it can be shared online or saved to the phone’s memory.

If the selfie stick is a blight on society, then the Insta360 One’s flying camera mode is its revenge. Insta360 has made it possible to capture an effect that’s very similar to “bullet time” using some digital trickery, and some borderline dangerous antics with the camera. Attach the camera to either Insta360’s special selfie stick, or to a lasso-style attachment, activate the bullet time mode, and swing the camera around your head.

Yes, really. Swing the camera around you, being careful not to hit anyone passing by, or smash any windows. Once again, syncing requires plugging the camera into your phone. The clever part is, the software digitally removes the selfie stick from the image, making it appear the camera was floating in mid-air and zipping around you. Yes, you’ll still see your arm held high, but it’s not overly distracting, depending on the situation.

We actually liked the end result, and given how expensive and complicated it would be to get this kind of shot normally, we think it’s a fun feature many people will really enjoy. It triggered the “how can we use this feature better” feeling we want from a camera too.

The Insta360 app has an editing mode called FreeCapture, which turns your 360-degree videos into a fixed-view video, leaving you to direct the action. It’s simple to use: You can change the viewpoint to include a Tiny Planet or panoramic view, and move your iPhone around to direct the action or show the greater scene. This is all performed after the video has been shot, and can be done multiple times.

The digital trickery used to create all these effects has previously been only available to anyone who can use complicated, technical pieces of post-production software. It’s also similar to a feature announced, but not yet released, by GoPro called OverCapture. What Insta360 has done is given regular iPhone owners, whether they have knowledge of post processing or not, the chance to create the same effect in moments, with almost no effort. We think that’s something to be applauded.

The Insta360 One does have its downsides. We’ve been testing a pre-release version, with pre-release firmware, and it has locked up several times; but we expect this to be cured by the time the camera goes on sale. The app’s editing suite, outside of FreeCapture, isn’t very extensive.

For example, there’s no way to trim videos before sharing them to YouTube. Because the Insta360 One shoots 4K video, we’re dealing with huge file sizes. A single, 46-second clip we shot was 117MB. Try sharing that to Twitter over a 4G connection, and not fear for your monthly data allowance.

We had fun with the Insta360 One. We created, simply and easily, videos that would previously been impossible to make without a degree of specialist knowledge, using a camera that plugs into the phone we carry with us each day. But like all 360-degree cameras it’s a niche product — a $300 gadget, at that — so while we think it’s cool, you’ll need to consult your wallet. It’s out to buy now.