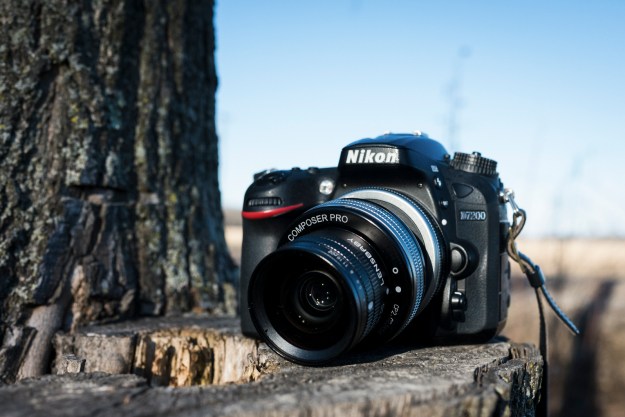 The Lensbaby Composer Pro II is the antithesis to the traditional camera lens. It is actually its own lens mount system, into which you can swap different optics. Why do this, rather than build the optics and lens housing into one and attach it straight to your camera? It all comes down to creative effects — Lensbaby optics can be tilted up, down, left, right, or anywhere in between to change the field of focus, and each optic offers a different focal length and effect. The new Edge 35 is a 35mm lens designed to produce a sharp slice of focus, while adding intentional blur into other areas of the image.

The effect is similar to what you can make with an expensive tilt-shift lens, but the Edge 35 and Composer Pro II together sell for just $450. Customers who already own a Composer can add the Edge 35 to their kits for just $249. The Composer Pro II comes in mounts for Sony E, Canon EF, Nikon F, Fujifilm X, and Micro Four Thirds.

The same Composer base can be paired with any Lensbaby Optic Swap System optic, like the Sweet 80, opening up a world of affordable creative effects lenses for the photographer that finds traditional lenses boring. This system stands alone from Lensbaby’s non-swappable lenses, like the Burnside 35 and Sol 45.

Swapping out a Lensbaby optic like the Edge 35 is slightly more complex than changing a traditional lens. The focus ring needs to be fully rotated, then the aperture ring needs to be turned to the maximum setting (f/22 on the Edge 35). You can then twist the optic off the Composer, making sure to grip it only by the edge and not the aperture dial. It’s a little tricky, but at least you don’t have to worry about it falling off mid-shoot.

The magic of the Composer Pro is in its two-part base, which uses a ball-and-socket design to allow the Edge 35, or other optic, to tilt and rotate. As you move the optic around, it changes the position of the focus effect. With the Edge 35, the slice of focus falls horizontally if the lens is tilted up or down, vertically if the lens is tilted side-to-side. As you focus, the slice moves across the frame.

Whether purchased alone or with the Composer Pro II, the Edge 35 is a relatively inexpensive lens, but it feels well built. The rings and rotating ball socket all have a sturdy, metallic feel to them (which is an improvement over older versions of the Composer). The construction doesn’t feel like the typical cheap lens and the aperture and focus rings adjust smoothly.

There are three separate rings to control and, yes, you’ll need to use all of them. Just like a tilt-shift lens, the Composer system is entirely manual-focus. What’s more, it’s also manual exposure — you must adjust the aperture by hand, and the lens does not communicate with the camera electronically to tell it what the aperture setting is. Beyond the aperture and focus rings, there is locking ring at the Composer base that tightens or loosens the ball joint. You can leave the lock loose for the easiest adjustments, tighten it slightly to allow adjustments but prevent accidental tilting, or completely lock the optic in place. You should leave it unlocked or partially locked if working handheld, and lock it tightly when working on a tripod, where the optic will tend to drift if you take your hands off it.

I tested the Composer Pro II and Edge 35 on both a Nikon D7200, a crop-sensor DSLR, and a Nikon Z 6, a full-frame mirrorless camera, which added an additional element of complication to the puzzle. I used Nikon’s FTZ adapter to connect the F-mount Composer to the Z-mount Z 6. The adapter seemed to make that locking ring even tougher to turn, perhaps from a small amount of additional play added by the mount, but the lens otherwise worked just fine. Of course, with no autofocus system or electronics of any kind, there’s really nothing that could have gone wrong.

Adapting the lens to a mirrorless body eased one of the toughest elements to working with a Lensbaby: Manual focus. While manual focus has some perks, like forcing you to slow down and think creatively, the lack of autofocus makes it tougher to get a sharp shot, particularly at wide apertures. And for photographing moving subjects? Expect to take dozens of shots to — if you are lucky — get one that’s in focus.

But on a live view camera, especially one with focus peaking, the Edge 35 was significantly easier to use — and even more of a joy to shoot. While there were still a handful of shots that were soft, looking in the electronic viewfinder for those red outlines — identifying areas of contrast in the image — to determine focus was easier than eyeballing it with DSLR’s optical viewfinder. You can certainly still use the lens with a DSLR, but the focus peaking built into most mirrorless cameras does offer a significant advantage when working with any manual lens.

The Edge 35 performed best by focusing twice — once pointed straight forward to clearly see what’s in the composition, and a second time after you orient the lens to its desired position or lock it down.

Using the Edge 35 felt a bit more like creating a work of art from scratch than simply capturing what you see. While you can’t always move the position of objects in the frame to get the ideal amount of blur for the lens’ depth of field, with the Edge 35, you can blur out most objects even if they happen to be positioned close to the subject.

Nudging the front of the lens to apply selective blur adds one more creative layer to the photography process. This is only a f/3.5 lens at the widest aperture setting, yet you can completely blur away entire areas of the image. Having the freedom to apply selective blur without a large and expensive f/1.4 lens is, simply put, a blast. But that’s not exactly surprising — LensBaby isn’t known for having the most pristine, sharp optics, but rather for introducing fun, creative effects in-camera.

Photographers don’t buy a Lensbaby for sharpness. That didn’t stop me from testing out just how sharp the lens is at the settings with the least amount of blur. The Edge 35, at the center of the image with the optic locked straight forward, has average sharpness at the center, if not a bit on the soft side (although, this could be partly due to a manual focus error).

With the lens pointed straight forward, the Edge 35 delivers the least amount of blur, but there is still some noticeable edge softness at the neutral position compared to a “normal” lens. But normal is boring — nudge the front of the lens and the edges quickly take on a beautiful blur. The blur is significant enough to look like a very wide aperture, like f/1.4-worthy blur. Text that’s on the same focal plane as the the subject is blurred enough to be illegible.

While the blur is beautiful, the center of the lens stays fairly sharp, drawing the eye to the subject. With the lens tilted, you can actually focus on foreground and background elements simultaneously (again, like a tilt-shift), creating a stripe that leads the eye from close-up to far-off elements.

Creating that blur optically rather than in Photoshop creates real bokeh. In the blurred edges, points of light are rendered to smooth, circular shapes similar to using a wider aperture lens. The blur circles overlap, with varying levels of brightness, and have no hard edges. A simple blur filter in Photoshop doesn’t have the same effect, leaving the points of light harder and less varied than a true bokeh.

Where the lens tended to struggle most was with backlighting. Shooting towards the sun, images were hazier than with the typical camera lens. The haze wasn’t anything a RAW file couldn’t correct later with some curves adjustments and added contrast. But, if you’re not going for that dreamy, hazy look, that’s a downfall for photographers probably picking up this lens to do creative effects with minimal work in post.

Shooting into the sun produces some expected, but not overwhelming, flare. Repositioning the camera away from the sun, then tilting the lens back towards the sun, does create slices of rainbow flare over the corner of the image. Depending on the way you look at it, this is either an unwanted artifact or just another way to add a creative effect with a Lensbaby.

The Lensbaby Composer Pro II with Edge 35 Optic takes the blur of a tilt shift lens and wraps it into a sub-$500 creative tool. Unlike digital filters and Photoshop editing, the intentional blur in the Edge 35 creates real bokeh and skips the extra time on the computer for a few extra seconds to focus and adjust in the field.

But, as with any Lensbaby, it’s important to understand what the lens is and what it isn’t. A Lensbaby isn’t designed to win those sharpness lab tests. As a manual focus lens, it also isn’t designed for action or any type of shoot where taking that extra second to carefully focus is a second too long. A Lensbaby is a creative tool for adding effects without post-production. It’s a way to reignite a spark of creativity and a tool for going beyond the standard, traditional image.

The Composer Pro II can also be used with other optics sets, ranging in price from about $120 to $225.

Lensbaby is one of the most unique lens brands out there, ditching the traditional standards of success and instead focusing on mixing creative effects with well-built, inexpensive optics. Tilt shift lenses create the most similar effect, but they are pricey. And while you can add edge blur in Photoshop, you can’t easily make fake bokeh to look as good as the real thing.

As a modular lens system, the Composer Pro II is uniquely poised to both last and integrate several different effects in one system. The build quality also feels solid and should hold up to regular use, avoiding drops and other lens disasters. That said, the II in the name of course indicates a second generation product, so it wouldn’t be surprising to see another rendition within a few years.

The Edge 35 itself should have a long life before being replaced, and it’s such a simple product that it is unlikely to have any major issues.

Buy the Lensbaby Composer Pro II with Edge 35 optic if you want a tool for adding creative, wide-angle blur and don’t mind taking the time to manually focus. If you need the speed of autofocus or hate hazy backlit shots, then look for a more traditional lens, like a 35mm f/1.8 prime.