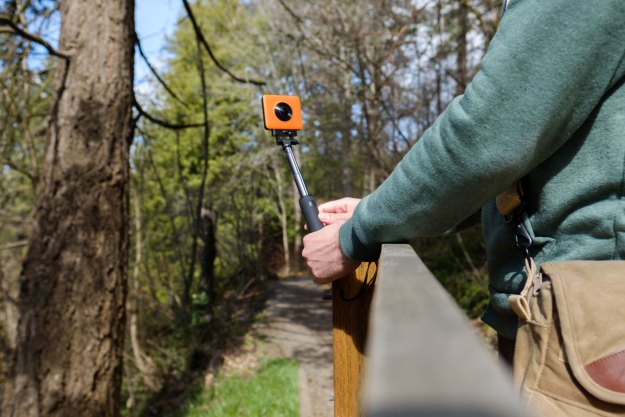 Manufacturers big and small continue to try to surf the 360 video wave, but how high can it swell before it breaks? New immersive video cameras are surfacing almost daily, both from established players like Samsung and Ricoh as well as startups on Kickstarter. A few bright examples have stood out like lighthouses on a stormy night, guiding consumers — and product reviewers — safely past the rocky shores of choice paralysis. Others litter the beaches, the jetsam of an industry that has struggled to find treasure and so often ended up with trash.

The latest such camera to take up the challenge is the MADV Madventure 360, a bright-orange, 4K 360 camera that can quite literally fit in your pocket. We often describe things as “pocketable,” but this one really is.

Other than that, well, it’s mostly a run-of-the-mill 360 cam, meaning you probably don’t need it.

The Madventure 360 is just as wide, less than half as tall, and nearly as thin as an iPhone 8 Plus. The twin f/2.0 lenses do bulge out a bit on either side, but, again, you’ll have no trouble fitting it in a pocket.

There’s a MicroSD card slot and USB port on one side, while the power, Wi-Fi, and record buttons are all up top. You’ll find a standard 1/4-inch screw thread on the bottom for attaching to a tripod (a miniature one comes in the box), along with electrical contacts so you can control the camera from the included selfie stick.

A bright-orange, 4K 360 camera that can quite literally fit in your pocket.

You can change between still and video modes by tapping the power button (hold it to turn the camera on and off). Hidden lights on one face of the camera indicate which mode you’re in, and a battery indicator light lets you know when you’re running out of juice or if the camera goes to sleep.

The body is sealed against dust and moisture and rated IP67, meaning it can remain submerged in 1 meter of water for up to 30 minutes. You won’t want to take it scuba diving, but it can certainly handle a quick dunk or a rain storm.

Like other small 360 cams, you can control the Madventure from your smartphone (iOS and Android). The app is simple enough to navigate, but it definitely feels unfinished, with plenty of bugs and glitches. Video playback was marred by occasional stutters and audio static on an iPhone 7 Plus. In one instance, the thumbnails of clips we had downloaded were replaced with the thumbnails from MADV’s included sample videos. Some UI elements and buttons don’t always show up, or load beyond the borders of the screen where they can’t be accessed.

The first time we opened the editing section, for example, only a “cancel” button showed up along with the “cut” tool. The video timeline went off the side of the screen and there was no way to resize it. We were able to resolve this issues by force-quitting and relaunching the app, but we had to do it two times to clear everything up.

On the topic of editing, there is precious little you can do within the actual edit screen. The “cut” tool is actually a trim tool, letting you shave off time from the beginning and end of a clip. You can also add a filter, and…that’s it. However, there are additional editing options hidden away within the “record” screen that allow you to output a standard fixed-frame clip, using the spherical video to throw in some creative digital camera moves. Essentially, you press record and the app saves whatever is displayed on the screen; as the video plays, you can pan and zoom, and all of those actions will be written to a new video file. You also have the option of outputting an equirectangular version that you can upload to 360-compatible sites like YouTube and Facebook.

MADV included a ton of exposure control options that this type of camera usually foregoes.

The ability to output fixed-frame video is good to see, as this is where we believe 360 video’s true calling lies, but MADV’s tools for doing so are not as streamlined or user friendly as they could be. Unlike the Rylo, which can create perfect keyframe pans or automatically follow an object on screen, the results from the Madventure are much rougher. It’s nearly impossible to get a smooth pan by tapping and dragging on the screen, although you can change perspective by moving your phone around, which is a bit smoother, but also a little ridiculous. We do like having the option to zoom all the way out to the little planet perspective, but, again, it is difficult to do this smoothly, which ruins the effect.

The Madventure also offers gyroscope-based image stabilization. This is one area where 360 cameras can really outshine standard fixed-perspective cameras, but MADV’s implementation of it is just OK. Foreground objects tend to remain quite jittery even with stabilization turned on. It’s a far cry from the buttery smooth footage we captured with the Rylo.

However, we have to give credit to MADV for including a ton of exposure control options that this type of camera usually foregoes. White balance, ISO, shutter speed, and exposure compensation are all user-adjustable. You can also access intervalometer and bracketing modes from the app. All of this is pretty cool. It’s not enough to overlook the general bugginess and lack of user-friendly editing controls, but it’s a nice touch that may give it a slight edge for some users.

Thanks to its dual sensors, the Madventure 360 can record spherical still photos at up to 24 megapixels, and they look sharp and vibrant, with good detail. The still photos leave us with no complaints.

Unfortunately, we can’t say the same thing about video. Now, all 4K 360 cameras aren’t as sharp as you’d normally expect for 4K video. That’s because all of those pixels are spread out over a spherical area, meaning you’re never looking at all of them at one time. That said, the Madventure is definitely worse off than other 360 cameras, losing detail to heavy-handed compression. It also suffers from a rather extreme amount of chromatic aberration (color fringing around edges and fine details, like branches) which was all but absent in the still photos. In short, video quality is disappointing.

In high-contrast scenes, video also suffers from the camera’s limited dynamic range. On a hike through a forest gorge, the sky was completely clipped, displaying as pure white, even as the camera simultaneously struggled to reveal detail in the shadows on the ground. This problem is inherent to immersive video cameras, as they’re trying to find an average exposure value for the entire scene, and the small sensors these consumer models simply can’t handle it. At least the Madventure lets you set exposure compensation so you can choose which part of the scene you want properly exposed, but it’s definitely not perfect. You have to decide if the novelty of shooting in 360 is worth the image quality tradeoff, and, in our opinion, it usually isn’t.

MADV offers a one-year warranty on the Madventure 360 and other products.

While the Madventure 360 offers some unique styling and control for this level of 360 camera, it ends up feeling like a tired and overused refrain. It’s trying to capitalize on consumer excitement for 360 video that has long since waned, without giving users a new reason to get excited. It feels like it’s on the brink of being cool, but a buggy app and limited editing controls hold it back. It offers neither the best user experience nor superior image quality to the competition, and the fact that it’s waterproof and pocketable doesn’t do enough to justify its shortcomings.

Yes. Allow us to point you again to the Rylo. It costs $499, which is a bit high, but it’s a 360 camera you may actually want to use more than once. It has the best user experience of any 360 cam we have tested, and makes editing immersive video fun and easy.

At $310 from Amazon, the Madventure isn’t the most expensive 360 camera out there, but it is quite a bit higher than the likes of the Samsung Gear 360, which can be found for as low as $105 online. If you just want to play around with immersive video, we recommend paying as little money as possible. If you think you might actually shoot 360 more than once, then we suggest you save up and invest in something like the Rylo or the even more advanced GoPro Fusion.

The camera itself is built well, and we appreciate the dust and splash proofing. However, it also feels like it arrived dead in the water. Other 360 cams have already outpaced it. There isn’t much here that is novel or unique enough to demonstrate that the Madventure has any legs to carry it. Software updates could introduce new features down the road, but that’s not a reason to buy it right now.

Barring future updates, the Madventure is a strong pass. It does some things well on the design front — better than the competition, even — but this just isn’t enough. A frustrating, buggy app and uninspired editing controls make for an immersive video experience that is little more than a gimmick. It’s valuable only as a cool party trick — except it’s the same trick that other cameras have been pulling for years now.