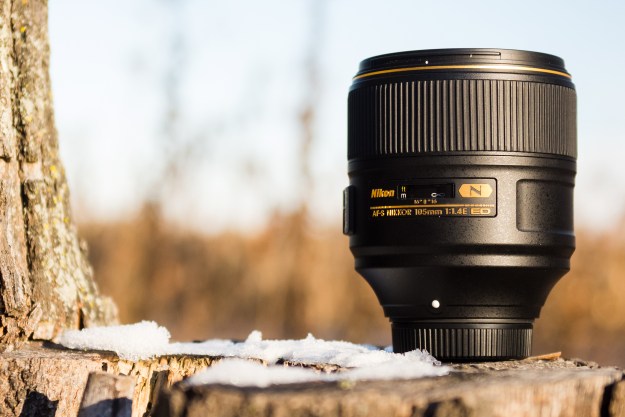 Some prime lenses are designed for affordability and portability, while others are designed for maximizing image quality at any cost. The Nikon AF-S Nikkor 105mm f/1.4E ED falls squarely in the second category. Tipping the scale at more than two pounds, it’s a beast of a lens, but uses a wide aperture and excellent optics that warrant wielding such a large lens. On the front of a Nikon full frame camera, the Nikkor 105mm f/1.4E captures dreamy bokeh and sharp subjects while minimizing chromatic aberration and distortion.

Nikon was the first manufacturer to mix both a coveted f/1.4 aperture and 105mm focal length into one lens, giving portrait photographers a dream combination. We put the lens through a series of tests spanning several portrait sessions, stylized shoots, and weddings to see if the lens is worth every bit of the $2,200 price tag — and to see how it stacks up against its newer competition in the less expensive, but even more gargantuan, Sigma 105mm F1.4 Art.

The Nikkor 105mm f/1.4 is an F-mount lens designed for Nikon DSLRs, but it works quite well on Nikon’s new Z-series mirrorless cameras using the FTZ adapter. It is built from 14 elements in nine groups. The lens has an aperture range between f/1.4 and f/16 and uses nine aperture blades to help create soft, circular bokeh even when not shooting wide open. As a high-end lens, Nikon put several different coatings and elements designed for minimizing distortion, including three ED glass elements, and nano crystal coatings. Fluorine coatings on the front of the lens help repel dust and moisture while making fingerprints and smudges easier to wipe clean.

As a prime lens, the controls are straightforward — there’s the expected focus ring along with the usual window displaying the focus distance. The lens also has a switch to flip from autofocus to manual, although photographers can also override the autofocus by rotating the focus ring at any time.

All those advanced optics, bright aperture, and telephoto focal length come together to create a sizable lens that weighs 38.6 ounces — just a touch over two pounds. The lens is also wider than most, widening at the F-Mount base out to an 82mm filter size. The lens is certainly hefty for a prime lens, but it’s not outrageously so for photographers used to working with other high-end glass like a 70-200mm f/2.8. Also worth it noting, it’s actually over a pound lighter than the Sigma 105mm F1.4 Art, which also uses a larger 105mm filter thread.

The focal length and weight can also make it difficult to use the lens handheld. We did catch some motion blur at 1/100 second, especially during longer shoots, so photographers should be a bit more conservative with the shutter speed, even beyond the usual limit of the reciprocal rule (where a 105mm focal length would suggest a 1/100 second shutter speed). It’s worth noting, though, that on the stabilized bodies of the Nikon Z7 and Z6, we easily shot at 1/60 second without motion blur.

The lens uses an internal ultrasonic focusing motor (Nikon’s Silent Wave Motor), which is not absolutely silent, but quiet enough to not be distracting in low-noise environments, like a wedding ceremony. The autofocus motor performed just as we’d expect for a high-end DSLR, locking on quickly. Autofocus performance, of course, relies both on the motor in the lens and the autofocus system in the camera. We tested it on the Z7 and Z6 mirrorless cameras, as well as the D7200 DSLR, and have no complaints.

We were also pleased to see that 105mm didn’t seem to struggle when shooting into the sun, an area where we have noticed problems on other lenses. That said, at f/1.4, depth of field is so narrow that it introduces more potential for user error if the focus point isn’t dead-on, or if camera shake moves that focus point just off where it should be before the shutter is tripped.

With a close-focus distance of 3.3 feet, this isn’t a macro lens, but it is certainly sufficient for close-up portraits.

When it comes to image quality, the Nikkor 105mm f/1.4 sits at the top of the list for portrait work. The f/1.4 aperture creates dreamy, defocused backgrounds. Distortion is near non-existent and the 105mm focal length offers a flattering amount of compression, but is still versatile enough to be used for everything from headshots to small group portraits.

The f/1.4 aperture creates smooth bokeh quickly falling off to a soft background from the sharp subject. Backlit images take on almost an ethereal look. Highlights in the unfocused areas create circular bokeh with a pleasingly soft edge. That soft background helps the subject really pop, which is further emphasized by the longer focal length compared to something like a an 85mm portrait lens.

While creating beautifully soft backgrounds, the lens captures sharp detail on the subject, even at f/1.4. Used with a high resolution camera like the D850 and Z7, the combination creates that zoom-to-the-eyelash-level kind of detail.

While shooting the lens wide open is acceptably sharp, sharpness improves a bit moving towards f/2.8. Like all lenses, the image is sharpest in the center, but the edges were still acceptably sharp.

The lens is so heavy that it will tire out your arms a bit faster and you may need to shoot with a shutter speed higher than 1/100.

We tried really hard to find chromatic aberration, the colored fringing common in high contrast edges, and we did find some — but only while zoomed in at 100 percent on a 46-megapixel file from the Z7. Suffice to say, no one is going to notice any significant aberration.

Shot into the sun, the lens creates a nice, soft flaring that’s mostly white with some green tint to the edges and the occasional rainbow pattern. Overall, the flare is a good mix that makes is easy to minimize when you don’t want it and easy to maximize when you do. A bayonet lens hood is included.

We didn’t spot vignetting until we went really looking for it — which means most viewers probably won’t notice it at all in real world situations. A quick vignette slider in Lightroom with a value of just 3 made that tiny bit of darker corners disappear.

Our only complaint on the image quality is one that we’ve already voiced. The lens is so heavy that it will tire out your arms a bit faster and you may need to shoot with a shutter speed higher faster than you’d expect. We’d recommend shooting at least 1/125 with a good grip and at least 1/160 if you’ve already been shooting for a few hours. (You’ll probably see the motion blur before you realize your arms are getting a bit tired).

The Nikkor 105mm f/1.4 E ED creates dreamy portraits with sharp details and beautifully defocused backgrounds. If we had an unlimited budget but could only choose a single portrait lens, this would be it. The focal length is flattering and the image quality, but objective and subjective, is superb. The lens is also a nice tool beyond portraits for any subjects that can benefit from a moderate telephoto and a bright aperture.

While the lens now sits as one of our favorite portrait primes, there’s no such thing as a perfect lens. The lens is on the heavy side, and besides being more tiring to use for long shoots, we had some motion blur even at 1/100, which limits the settings that can be used with this lens handheld. Optical image stabilization would have been welcome — on a stabilized body like the Z7 and Z6, we were able to shoot confidently at 1/60; but that doesn’t help Nikon DSLR users.

The lens also certainly isn’t cheap. At $2,200, it has a price to match the high-end optics inside. The price isn’t outside the norm for a high-end, first-party lens, but it is steep enough to give many photographers a reason to look elsewhere.

At launch, Nikon earned the title of world’s first 105mm f/1.4, but that was in 2016. Now there’s a bit more competition in this narrow niche from Sigma with its 105mm f/1.4 Art lens, available in Nikon F-mount as well as Canon EF, Sony E, and Sigma SA mounts. Both lenses impressed us with quality, but the Sigma’s main advantage is its $600-lower cost. The Sigma, however, is even heavier at 3.6 pounds which led to even more fatigue when shooting handheld. We found it required a shutter speed of around 1/250 or higher for sharp results, so the Nikon has a bit more flexibility — plus, it simply won’t put as much on your shoulders if you’ve got to carry it around in a bag all day.

The Nikkor 105mm f/1.4 is a beast of a lens — the professional build will probably help the lens really earn it’s price tag through several years of shooting. It’s dust and moisture sealed, so provided you take care of it and don’t drop it, the lens should last you several years.

If you’re a Nikon DSLR or mirrorless shooter with $2,200 to spend and don’t mind if your gear also gives you a little arm workout, buy the Nikkor 105mm f/1.4E ED. The image quality is superb, with sharp details and bokeh dreamy — just be aware that you’ll need to use a higher shutter speed to keep motion blur at bay with such a heavy lens.