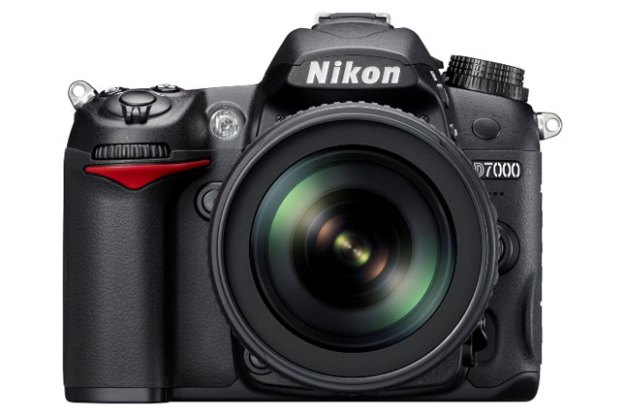 “It’s easy to understand why the Nikon D7000 ranks up there in popularity, even with a $1,200 price tag. Simply put, if you’re serious about photography, you want this camera”

It’s one of the key truths of the consumer electronics biz: Prices will drop like a rock soon after you buy your new toy. Oh, there are exceptions, like the iPad and iPhone, but you know the drill — buy it today, see a lower price in a month. Amazingly there is a pricey camera, the 16.2-megapixel Nikon D7000, that’s currently defying the laws of CE gravity—if you can even find one. Let’s see why.

The Nikon D7000 doesn’t look radically different than many other mid-range, all-black DSLRs on the market, such as the 18-megapixel Canon EOS 60D ($999 body only). With the 18-105mm kit lens, the Nikon has a no-nonsense vibe that says “I’m a serious camera.” Don’t even think of casually carrying it around. The D7000 measures 5.2 x 4.1 x 3 (WHD, in inches) and weighs 1.5 pounds without a battery, card or lens. Hefty and serious indeed.

Looking closely at the D7000, you get an inkling of its capabilities, but nothing that quite gives away its position as the hottest DSLR on the market. It has the usual Nikon red accent on the grip and a few judiciously-placed logos and icons. Drill down a bit and some of the finer points appear, such as a second LCD readout on the top, and a 3-inch 921K-pixel LCD on the rear. But the real enhancements are internal, as we’ll soon see.

Like any DSLR, the key feature on the front of the D7000 is the lens mount. In this case, it’s a Nikon F bayonet-type, and all functions are possible with AF Nikkor glass. As always, you can spend a small fortune on lenses, but the 5.8x kit lens (18-105mm, 27-157.5mm 35mm equivalent) with built-in Vibration Reduction is a good start. Also up front are an AF Assist lamp and buttons for Function, depth-of-field preview and lens release. There’s a three-pinhole mono mic, so if you want stereo sound for your videos, get ready to spend some extra cash on an aftermarket mic. You can connect one with the handy mic input in one of the side compartments. The pistol grip is solid, and there’s a jog wheel right below the shutter button and power switch.

On the top is the main mode dial, which sits on a perplexing control called a Release-Mode Dial. With it, you change your frame rate (most commonly) such as single frame, continuous low speed (1 to 5 fps) or continuous high speed (6 fps). Access to this dial is good, but in order to turn it, you have to press a nearby locking button at the same time. This seems very convoluted for such a basic and important control. In contrast, Canon cameras have a drive button you simply press to make this adjustment. That said, after some initial fumbling, we made adjustments using the left index and middle fingers. The same dial also gives you access to the self-timer, quiet shutter release option, using a remote control and “Mup” for Mirror up. The main mode dial has the usual options: Auto, Auto flash off, Program AE, Shutter- and Aperture-Priority as well as full Manual. Scene is typical as you can choose specific shooting situations (portrait, landscape and so on, 19 options total). There are also two settings (U1, U2) to save your favorite configurations.

Next to the stacked dials are the flash, hot shoe and control panel LCD, one of the key features separating entry-levels DSLRs from “enthusiast” models (500 clams more is another huge point of difference, but that’s another story). This readout lets you check your settings without having to put the camera in front of your face, and is very handy for shooting on the fly. Next to the shutter are buttons to change metering type and exposure compensation.

The rear has a very good and bright viewfinder with 100-percent field of view and 0.95x magnification (by comparison, the Canon EOS 60D is 96-percent coverage with 0.95x magnification). A diopter control lets you fine-tune it for your eyesight. Below the VF is very good LCD screen rated 921K pixels. The 60D has an articulating 3-inch screen with more dots (1.04 million total), so Canon wins that round.

Surrounding the screen are the usual array of buttons for white balance, ISO and so on, with another jog wheel on the top right to move through menu options and a controller with center OK button. Since this is 2011, there’s a red video dot in middle of the Live View lever—simply pull it to the right, the mirror raises up, press the dot and you can shoot HD video (1920 x 1080 at 24 fps MOV files). There’s a six-pinhole speaker nearby. This is hardly the 1080p at 60 fps of the recently reviewed Panasonic SDT750, but it’s home video nonetheless (more in the performance section).

On the right side is a compartment for two SDHC/SDXC cards. You can put stills on one, video the other if that rings your bell, or just use a single card. The D7000 is the first camera we’re aware of that uses the Ultra High Speed system (UHS-1) for faster read and write speeds. The left side has a compartment with A/V, USB and mini-HDMI outs. A second has inputs for mics and GPS. Near the lens mount is an AF/Manual switch, as well as bracket and flash-open keys.

The bottom of this Made-In-Thailand DSLR has the battery compartment, metal tripod mount, and the contact cover for an optional battery pack. As with lenses, you can spend thousands if you want to trick out your camera. Hold off for a while, since the D7000 is far from cheap to begin with.

Since this camera is one of the first that’s UHS-1 compatible, which allows for up to 45 Mbps read speeds, we popped in a new 16GB SanDisk Extreme Pro SDHC card and hit the streets.

The Nikon D7000 uses a 16.2-megapixel APS-C size sensor (23.6 x 15.8mm), a first for the company. Its most expensive DSLRs feature full-frame imagers (23.6 x 36mm) but expect to pay at least $2,500 for one. While not the 18-megapixels of the APS-C 60D, at these levels you’d be hard pressed to notice the difference, unless you’re blowing up your images to fill a Times Square billboard. Both are overkill for most shutterbugs, but if there’s no compromise with image quality at these high numbers, what’s the harm? Note there is definitely harm with many 14- and 16-megapixel point-and-shoots with their tiny CCDs — that’s why we suggest avoiding nose-bleed figures in that category.

At 16.2MP, you’re capturing 4928 x 3264 pixel files. We put the camera into RAW+JPEG Fine mode to test its ability to push piles of pixels. As usual, we started in Auto, then moved to manual options since it’s a shame not to play with a camera of this level. Videos were shot at the highest resolution.

When we were first shown the D7000, Nikon execs were really stoked describing the new 2,016-pixel RGB 3D Color Matrix metering system. They claimed it would deliver incredibly accurate exposures. They noted the $8,000 D3x uses the “old” 1,005-pixel 3D Color Matrix Metering II setup. This—along with the new sensor—are among the key advances of this DSLR, as is the speedier burst mode of 6 fps versus the 4.5 of the 12.3-megapixel D90. The D3s is Nikon’s fastest camera, at 9 fps, but it costs $5,199 (body only). Another advance is increased ISO sensitivity. Native is 100 to 6400, but it hits 25,600 in the Hi 2 setting, for shooting in near darkness. Toss in a new 39-point AF system with nine center cross-type sensors, and you’ve got one impressive DSLR in your hands. Now it was time to see if all the pieces in the puzzle came together.

It’s dead of winter in the Northeast, and it’s hard to find anything moving quickly to test the burst mode in our neck of the woods. Not so in Manhattan, where yellow cabs and red buses fly by along with silver-clad messengers on scooters. We used Continuous H to capture them.

Before getting to the results, let’s state that using the Nikon D7000 is quite enjoyable. Response time is blazing fast even shooting RAW+JPEG Fine; peeling off bursts of 10 to 20 images, the camera barely seemed to breathe hard. Once we got the feel of this beefy DSLR, changing parameters was quite simple, even that odd Release Mode dial.

After filling our SanDisk card, we made prints, reviewed the files closely on a monitor and watched the videos on a 50-inch plasma HDTV via HDMI. Nikon claims with the expanded ISO range you can “capture just about every moment that captures you.” Well, we had to try shooting a single candle in a very dark room at 25,600 ISO — the results were predictable as we had a pixilated mess. Oh, you can clean up the noise in the RAW files, but the JPEGs were pretty bad. You need a full-frame sensor, and to spend twice the money, for solid results at those levels. That on the table, the D7000 handles noise unbelievably well up to ISO 3200, with noise making its presence felt at 6400. At 10,000 the snowstorm turns into a blizzard, but if you stay within the native range of 100 to 6400, you’ll be quite happy.

Colors, as you’d expect, were very accurate. Although we tend to like ours more saturated and vivid, you can tweak the D7000 to whatever level suits you, as Nikon has a suite of retouching options available during playback. We’re talking fine-tuning here, as the basic photos are much better than acceptable. The new metering mode handled some difficult in-and-out of shadow subjects but it’s not perfect — you still need your fill flash and exposure compensation skills for best results. Focusing was super sharp, and very fast, with terrific detail.

We had no trouble capturing fast-moving vehicles flying down Manhattan streets with hardly any blur. This will be a great camera for parents with budding athletes, or if you have a hyper-energetic kid (aren’t they all?).

We can go on and on about the D7000’s still capabilities, but you get the idea, it’s a very fine DSLR. It is not, however, a very fine camcorder.

Our issues with contrast-phase-detection focusing systems remain on the table. Nikon’s AF system works OK, and colors are spot on, but when you touch any of the controls, such as pressing the shutter or working the zoom, the mic picks it up, something no camcorder does. Sony’s SLT-series DSLRs with phase-detect focusing still remain the video leaders, as far as DSLRs are concerned.

Having extensively tested the Nikon D7000, it’s easy to understand why this camera ranks up there in popularity, even with a $1,200 price tag. Simply put, if you’re serious about photography, you want this camera. As for the video, it’s a nice feature, but not the raison d’être for this very impressive DSLR. Good luck finding one—or getting a deal.