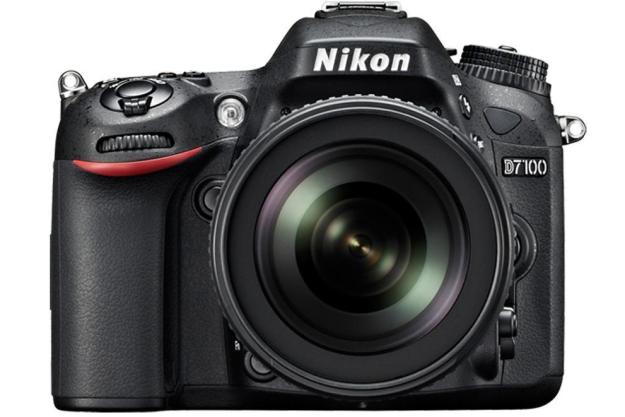 “The D7100 is a big, serious DSLR that makes only a few minor compromises on its way to offering the best possible value for enthusiast photographers.”

Nikon has updated one of our favorite enthusiast DSLRs and – fortunately – did not mess up a good thing. The heavy, bulky 24.1-megapixel APS-C camera is a welcome addition to a crowded field. Now we’ll describe how it stands out from the pack – and where it falls behind …

Don’t expect anything unusual in the styling and ergonomics of this all-black DSLR. It feels big and somewhat cumbersome, which was particularly noticeable since we tested the compact Sony RX1 and Nikon Coolpix A at the same time. But it’s not really fair to compare a pair of fixed lens digicams to an interchangeable lens camera with a mirror-box assembly. With that said, the weather-sealed D7100 is for photographers who want their pick of lenses, a classic optical viewfinder as well as the rapid focusing and performance of a DSLR. The camera, which has a sturdy magnesium-alloy frame, measures 5.3 x 4.2 x 3 and weighs 27 ounces with battery and card but no lens. Add another 15 for the kit glass and you have some serious weight to haul around.

Forgive us one bit of photo geek talk: The 24.1MP D7100 does not have an optical low-pass filter.

The D7100 has the design of every other DSLR in the Nikon line-up with the distinctive red swoosh on the grip and white logo near the flash. The critical feature on the front is the Nikon F mount, offering dozens of options. Our review sample was supplied with the 18-105mm VR kit lens which has an effective range of 27-157.5mm, thanks to the 1.5x digital factor of the APS-C sensor. The camera also offers a new 1.3x crop setting at reduced resolution if you want to extend your reach to around 205mm (more on this in a minute). Other features on the front include an AF Assist lamp, focus switch, and bracketing and depth-of-field preview buttons.

On the top deck you’ll find the one item that really separates this DSLR from less expensive models – an LCD readout so you can quickly check your settings. It’s very readable and by pushing the on/off switch to the left, it lights up so you can more easily work in the dark. Also here is a two-level mode dial. On the top is the classic wheel with Auto, PASM, scene, effects and two user selectable options. The lower dial lets you quickly change burst speed (6 fps is tops), use a quiet shutter mode, adjust the self timer and turn the mirror up. There is an auto pop-up flash, two stereo mics and a hot shoe. On top of the grip is the shutter, power switch, exposure compensation and metering keys as well as a red-dot movie button, which is jammed into this small area, making it difficult to press if you want to grab a video. There’s definitely room on the back and it really should be near the Live View controls. Right below the shutter is a convenient jog wheel on the front plus there’s another on the back on the top right for making adjustments and moving through the menus.

The back plate of the D7100 has two very nice features: a high-quality optical viewfinder and a 3.2-inch fixed position LCD. The VF with diopter adjustment has a 100-percent field of view plus, there’s an OLED readout on the bottom of it so you can easily see your current settings (aperture, shutter speed and so on). The LCD is rated 1,229K dots and works well under most light conditions.

Surrounding the screen are the buttons you’d expect on a quality DSLR (WB, quality, ISO, AE-L/AF-L). There is also a switch for Live View in still/video.

On the right side is something you also won’t find in basic DSLRs – dual SD card slots – so you’d be hard pressed filling two cards during a day’s shooting unless you go video crazy. The left compartment has mic, headphone and GPS inputs as well as HDMI and USB outs. The bottom of the Made in Thailand camera has the battery compartment and tripod mount. The supplied battery is good for a whopping 950 shots (per CIPA).

If you purchase the kit, you’ll get the camera body and 5.8x image-stabilized zoom, offering a very good focal range for everyday shooting. Also in the box are the battery, charger, various caps, straps, a gigantic 356-page User’s Manual and a CD-ROM with Nikon’s ViewNX 2 software for handling RAW files and editing images.

The original D7000, introduced late in 2010, is still available for around $900 (body only) but there’s really no reason to buy it. The new D7100 not only has much higher resolution – 24.1MP versus 16.2MP – but it also has a better processor (Expeed 3 found in the D4/D3200/D5200), takes higher-quality videos (1080/60 vs. 1080/24), and it has an improved AF system. We liked the D7000 with its very fast AF and accurate metering; the new model is even better. The older camera has 39-point AF/9 cross-type while the shiny new one is 51-point AF with 15-cross type sensors. What this means to you in the real world is extremely fast focusing with very little grabbing, even in low-contrast scenes. The D7100 also captures 6 fps, even with far more pixels than the D7000 which is also rated the same. It’s pretty clear that the D7100 is the choice between siblings but what about the DSLR itself in a sea of rivals? Glad you asked, because this camera is a winner. We know it’s getting a little monotonous given our other reviews but you really have great cameras to choose from in 2013 – if you’re willing to pay the price.

We used the D7100 with high-speed SDHC cards over the course of several weeks, shooting a variety of stills and videos. Most of our images were high-res JPEGs plus we also used the 1.3x crop mode in select circumstances when we needed some extra juice for the kit lens.

As you can see by select samples, the D7100 is quite the performer. Before drilling down, we have to state the camera responds like a Porsche. Just a little gas – in this case pressing the shutter – and the DSLR quickly responds with rapid focus and metering. The results are very crisp photos with very accurate colors. We have to say the images do not have the richness and depth of full-frame DSLRs but, unless you compared them side-by-side, you wouldn’t care since the photos you’ll capture with this DSLR are still terrific. Forgive us one bit of photo geek talk: The 24.1MP D7100 does not have an optical low-pass filter. Nikon claims this offers improved detail at the pixel level for better image quality. Whether this does anything unto itself we don’t have a clue, but there’s no way we can complain about the stills we reviewed on our computer.

If someone were to ask for a recommendation for an enthusiast DSLR in this price category, we wouldn’t hesitate a moment – the D7100 is it.

We’re having fun shooting in the light of our new home state of Arizona and definitely enjoying subject matter that’s quite different from the Northeast. The D7100 beautifully grabbed plants at sunset with the help of little fill flash. One of the cool things we noticed as we pixel-peeped was a tiny bug sharply caught in mid flight, something we never saw while framing the shot. In keeping with its high-end features, the D7100 has a top shutter speed of 1/8000th of a second versus 1/4000 of lower-priced models. If you’re into shooting sports, put this Nikon on your shortlist.

The D7100 handles digital noise quite well. It has a basic ISO rating of 100-6400 but you can raise that to 25,600 if necessary. We wouldn’t do that on a bet but we’ve seen far worse images shot at that high level. The camera was solid to ISO 1600 with quality dropping at 3200 and 6400, which would be our outer limit. Even so this is an excellent result. We have to note this was in the standard DX mode (24.1MP). When you move into the 1.3x crop setting (15.3MP), stay away from these numbers unless you absolutely have no other option.

We couldn’t resist capturing the June 2013 “Super Moon” and used both settings since the 157mm lens wasn’t doing the trick grabbing the moon behind a palm tree. The 1.3x crop helped but added unwanted “moonbeams” (i.e. noise compared to the traditional framing). We’d rather use editing software for enlargements on a higher-res original. That, said this would be a good feature when shooting with plenty of ambient light.

Overall the stills are really top notch; only a Canon fan boy could find something to complain about. As for videos, we have our issues. Shooting movies on DSLRs, other than Sony SLT models, is cumbersome. If you want to play JJ Abrams, you’ll need to turn to page 161 of the User’s Manual to find several pages describing how to focus after you’ve moved to Live View and turned the nearby dial to ‘Movie,’ then find the red-dot record button top. Making all these moves practically guarantees jostling the camera so be prepared to make some edits. Although this is all a pain, Nikon has definitely improved the focusing and quality issues compared to the early D90. In a world of iPhone and Android videos, however, this whole process needs to be streamlined.

If someone were to ask for a recommendation for an enthusiast DSLR in this price category, we wouldn’t hesitate a moment – the D7100 is it. For all the points detailed above, it’s a wonderful camera and really geared for someone who takes their photography seriously. We can almost guarantee the User’s Manual will soon become your new bedside companion as you delve into all the advanced features offered by this camera. Stills are a slam dunk, but we have our issues with shooting videos as it should be a simpler, smoother process. Even with this shortcoming – found on nearly every other DSLR – we dub the D7100 an Editor’s Choice.

The DJI Osmo Action 3 looks nothing like the Action 2
Best GoPro deals: Sales you can shop today
GoPro Hero 11 Black leak suggests a moderate upgrade
Astronaut reveals source of ‘intriguing’ bright light on Earth
This MagSafe iPhone rig aims to give your videos a more pro look
Nikon’s new 800mm lens for Z-mount cameras lightens the load
ReelSteady makes GoPro Player ‘reel’ useful for filmmakers
GoPro takes to the skies with the Hero10 Black Bones
How to turn off the camera sound on an iPhone
24 amazing images of our planet for Earth Day
Instagram test lets you pin particular posts to your profile
Snapchat’s pocket-sized Pixy drone takes to the skies
DJI Mini 3 Pro unboxing video drops just ahead of launch