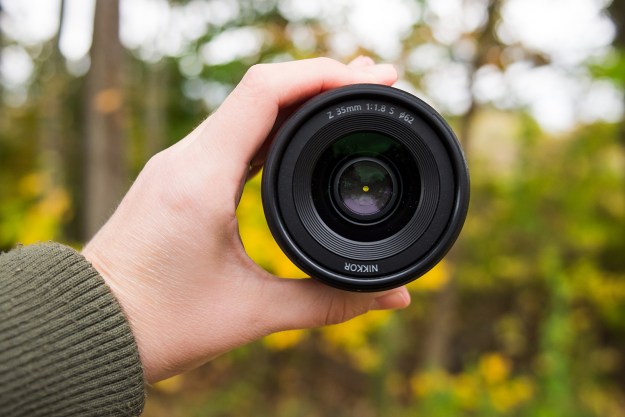 When it launched the mirrorless Z series, Nikon promised exceptional sharpness and minimal distortion with the new Z mount, which uses a much shorter flange-back distance and wider diameter than the F mount of Nikon’s DSLRs. That promise is evident in the Nikkor Z 35mm f/1.8 S. The widest of the two prime lenses included in the initial launch, it mixes a bright aperture and modestly wide angle of view into a weather-sealed body. It’s a great companion for the Z7 and Z6.

Make sure to also check out our Nikon Z7 review.

Compact, but not as much as you’d expect

While the Nikkor Z 35mm f/1.8 S is durable, the lens is far from a tiny pancake lens. It extends 3.4 inches from the front of the camera. At 13.1 ounces, it is actually heavier than the F mount 35mm f/1.8. It still feels well balanced on the Z7 and isn’t heavy enough to really impact shooting or portability, but Nikon hasn’t seemed to emphasize compactness where we might have expected it for a mirrorless system lens. Nikon stresses the new Z mount for optical performance, not necessarily size.

Still, given the slimmer profile of the Z-series camera bodies, Z 35mm is an excellent lens for travel, street photography and a number of other disciplines where portability matters. It is also dust and moisture sealed, just like the Z7 and Z6, again making it a good choice for travel. The body is only partially metal, but it has a solid, high-end feel.

Like a Nikkor DSLR lens, the Z 35mm has a focusing switch to swap between manual and autofocus. The wide control ring takes up a big chunk of the lens — the size makes it easy to reach for without hesitating or pulling your eye away from the viewfinder. The single control ring is set to manual focus by default, but can also be custom set to control aperture or exposure compensation. The control ring turns smoothly and quietly, but is not absolutely silent.

Autofocus performance is dependent on both the camera and the lens, and the Z7’s phase-detection AF system impressed us in our review — although, it wasn’t perfect. The Nikkor Z 35mm performs admirably in a variety of situations, but it can’t keep up with its DSLR counterpart in every shooting scenario.

The autofocus motor inside the 35mm is quiet enough that you’ll only hear it in silent environments. It is audible enough to be picked up by the microphone when recording video, particularly when it hunts to find focus on low-contrast subjects.

In most shots, the autofocus was smooth and locked onto the subject quickly. For portraits and other stationary subjects, it does a great job. The lens also focused well indoors in more limited lighting.

The autofocus did struggle a bit, however, with extreme backlighting, when shooting towards a low sun during golden hour. The lens was still able to successfully grab focus on most shots, but it was slower and backlighting produced the most focus errors in our testing. While it’s tough to determine if the camera or the lens was responsible for the missed focus in backlit scenes, the same Z7 didn’t seem to struggle as much with an adapter F-Mount 105mm in the same scene.

Image quality with the wow factor

As for Nikon’s promise of exceptional image quality, the Z 35mm f/1.8 S doesn’t disappoint. It is exceptionally sharp and clearly engineered for the high standards of the 46-megapixel Z7 — we couldn’t even tell the difference between f/8 and f/1.8 based on sharpness alone. Most lenses will be sharper stopped down, even with a lens test chart, the Z 35mm performed just as well wide open, from the center out to the edge of the frame.

Distortion is also minimal, with lines remaining relatively straight across the frame. We also had a hard time finding any chromatic aberration, even in high contrast areas.

The lens also created a good balance fighting lens flares and letting them happen for artistic purposes. The starburst effect at smaller apertures looks great, and there were occasional rainbow patterns that showed up, but nothing that was too intrusive.

Paired with the Z7, the lens rendered colors well. The edges have some very minor vignetting, the kind that’s hard to discern unless shooting with a clean, solid colored backdrop. Vignetting can be easily removed in post, so this isn’t a huge concern.

The lens’ wide f/1.8 aperture will easily create separation between the subject and the background, along with boosting low light shots. Bokeh is beautifully circular with soft edges, making this a great option for portraits, particularly environmental portraits where you want to take in some of your subject’s surroundings by shooting a wide angle.

The Nikkor Z 35mm f/1.8 S gives the new Z-Mount a promising future. The lens captures sharp images with minimal distortion, thanks in part to advances in the mount. Autofocus did have a little bit of trouble in extreme backlighting, but otherwise delivered what we’d expect from a lens with the Nikon name.

The $850 list price is quite high, especially considering the F-Mount 35mm f/1.8 is only $530. However, Nikon says that lens is designed for HD video and everyday shooting, with the Z series model being held to a higher standard. While it’s hard to tell without directly comparing images from both lenses, the cheaper and smaller F-Mount lens doesn’t appear to deliver quite the same quality. (DxO Mark says the chromatic aberration on the F-Mount lens is higher than expected and the images are sharpest at f/11.)

The Z mount is young, and as such, there aren’t very many options if you don’t want to use an adapter. That said, the adapter didn’t appear to affect performance when pairing DSLR lenses with the new Z7. Nikon’s own AF-S Nikkor 35mm f/1.8G ED is cheaper and lighter, but not if you plan to use it on a mirrorless body with the requisite adapter. The Sigma 35mm f/1.4 DG HSM Art lens scores a few points higher than the F-Mount version on lens tests, but hasn’t been directly compared with the new Z mount and sits at a higher $900 price point (but also offers a faster aperture).

While it’s debatable whether buying the Z mount 35mm is worth the cost for users that already own an F-mount 35mm lens, the lens is an excellent, bright wide angle for pairing with the Z7 or Z6.

With dust and moisture sealing and a solid build, this lens should last a long time. Lenses tend to outlast camera bodies, and it’s easy to see the Z 35mm living through several generations for the Z series.

If you need a sharp, bright wide-angle lens for your Z7 or Z6, yes. The lens delivers excellent quality and the cost of the adapter offsets its higher cost compared to F-Mount lenses. Be careful in backlit situations, where the autofocus isn’t as reliable, but otherwise we have no reservations.

Sony’s first drone, the Airpeak S1, rockets to 55 mph in just 3.5 seconds
The Nikon Z 7 II and Z 6 II are coming October 14: Here’s what we want to see
Nikon’s latest optics offer features unique to the Z lens line
Fujifilm’s new nifty 50 f/1 lens can autofocus in near darkness
Vloggers, Nikon has built a new camera just for you
Best 4th of July sales still available — save on TVs, Apple and more
Netflix sheds light on its ‘approved cameras’ for filmmakers
Best Prime Day Drone Deals 2022: What to expect this week
How to remove the background from an image
Instagram boss says to expect even more video content
6 awesome Earth images captured from the ISS in July
This GoPro Hero 10 bundle is $100 off at Best Buy today
The best iPhone tripods for 2022