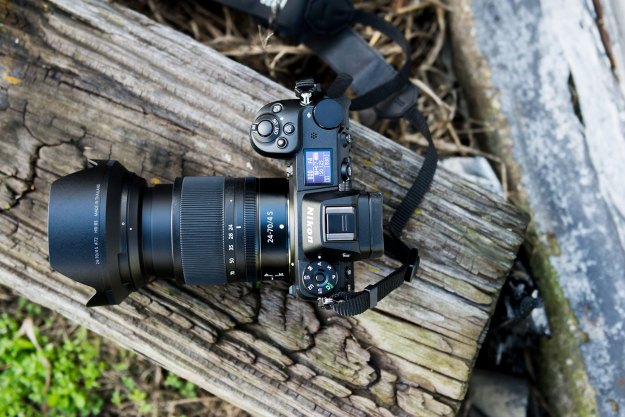 “While not the brightest, the Nikkor Z 24-70mm delivers excellent sharpness and smooth AF performance.”

After a long history of F-Mount lenses dating to 1959, Nikon has finally embarked on a new series of lenses built for an entirely new mount: the mirrorless Z-Mount. The Nikkor Z 24-70mm F/4 S sits as the first zoom lens in the series, covering a standard zoom range that’s widely (and lovingly) referred to as a workhorse lens by many photographers.

But the Z-Mount is more than just a jump to the end of the alphabet, with Nikon saying it allows for enhanced sharpness and vibrance thanks to the wider diameter and shorter flange-back distance. Built around a modest maximum aperture of f/4, the Z 24-70mm is more compact than its f/2.8 F-mount cousin, making it a good fit on Nikon’s new mirrorless cameras.

Sure, some photographers may lament the lack of a faster aperture, but don’t be dismayed — this lens deserves that Nikkor name in front just as much as any F-mount DSLR lens.

Compared to the long-standing F-mount, the Z-mount uses a wider diameter that’s immediately apparent to any Nikon DSLR user. The wider diameter will allow for faster aperture lenses — while the 24-70mm F/4 isn’t among them, the company is already developing an f/0.95 lens, which simply wouldn’t be possible on the F-mount.

The Z-mount lens also has a shorter flange distance — this just means that the lens is closer to the sensor. While this is common on nearly all mirrorless cameras (the Sigma SD Quattro series being one exception), the Z-mount’s flange is shorter than any other full-frame camera at just 16mm. Nikon says that shorter distance also allows for more compact lenses.

The 24-70mm uses another trick to keep it compact: When not in use, you can twist it to retract the barrel, where it shrinks to just 4 inches long, or extends just 3.5 inches from the front of the camera when mounted. Once extended, the lens sits at about five to six inches long, depending on the zoom position.

The lens is also relatively lightweight at just 17.7 ounces. There’s no direct DSLR lens from Nikon to compare that size too, but the Canon 24-70mm f/4 weighs 21 ounces. Compared to Nikon’s F-mount 24-70mm f/2.8, the Z-mount weighs almost half. Given the aperture is twice as small, however, that makes sense.

Nikon’s mission with the Z Series doesn’t really appear to be about reducing size and weight, however. The Z 35mm is slightly larger than the comparable F-Mount, while the specs for the upcoming Z 50mm f/1.8 list a weight that’s twice the F-mount 50mm f/1.8. The much higher price point of the new Z-Mount 50mm suggests high-end quality, however, and the F-mount 50mm is a much more budget-friendly lens.

While most of the size advantage is going to come from the switch to a mirrorless body, the 24-70mm f/4 is still easy to bring along. The ability to twist the lens closed leaves it taking little space in the camera bag considering the zoom range.

When working with it, the lens also feels sturdy in the hands thanks in part to the weather-sealed build. The zoom ring is easy to grip and turn. Closing the lens for storage requires a firm twist, but that prevents accidentally closing the lens while shooting. Along with the zoom ring, a second ring on the lens can be customized to control different settings. By default, it controls manual focus like most lenses, but can also control aperture and exposure compensation.

The lens accepts 72mm filters and includes a lens hood.

The Z 24-70mm f/4 S uses an internal autofocus motor that pairs well with the Z7’s 493 autofocus points. (We haven’t yet tested the lens with the Z6’s 273-point autofocus system.) The autofocus motor is audible, but quiet — you’ll hear it in a quiet room, but not in crowds. In video mode, the autofocus is even quieter — you can hear the autofocus if you record in a quiet room and really listen, but it’s so quiet we had a hard time picking up the noise in the video, which is good news for videographers. Zooming the lens is likewise also quiet, but not entirely inaudible in video.

Paired with the Z7, autofocus performed up to par. The lens focused well indoors in limited light, impressive considering the relatively slow f/4 aperture. Both indoors and out, autofocus locked on consistently. It struggled slightly when shooting through aquarium glass in limited light — where we would expect any lens to struggle — but was still able to grab focus in most shots with a few soft images.

The 24-70 is a go-to lens for a variety of shots thanks to its focal length, which ranges from a modest wide angle to a short telephoto. While it’s not a macro, the it didn’t do too bad on close-ups. The lens is able to focus on subjects up to a foot away from it, even at 70mm. While the .3x magnification won’t replace a real macro lens, it’s a nice range of versatility that isn’t always possible with other similar lenses. (On the 46MP Z7, you also have plenty of room to crop if you want a tighter close-up.)

The 24-70 is a go-to lens for a variety of shots thanks to its focal length, which ranges from a modest wide angle to a short telephoto.

One of the lens’ shortcomings is right in the name — the f/4 aperture. That’s fine for landscapes and helps keep the lens more compact for travel and street photography, but it won’t create the same soft backgrounds as a wider aperture lens. This makes it a bit less attractive for portraiture, but while you can’t get the super shallow depth of field of a faster lens, the bokeh circles were still smooth and round. It also limits the low light potential of the full-frame sensor, but thanks to in-body stabilization on the Z series cameras, this lens may be just fine for you in low light — so long as you don’t need to freeze a moving subject.

What Z 24-70mm lens lacks in aperture it makes up for in sharpness. Even wide-open at f/4, the lens is exceptionally sharp. The edges sharpen up a bit as you stop down, but it’s a difference only the most discerning pixel peepers are likely to pick up on.

Sharpness also varies little with the different possible focal lengths. Center sharpness is excellent across the board. The most noticeable lack of sharpness was on the edges of the images shot at 70mm — the five to ten percent of the image at the edge wasn’t quite as sharp as the rest of the image or as sharp as the wider focal lengths. Again, it’s not obvious — but if you place part of the subject on the edge of the frame, you might see that it’s a bit softer than a subject not quite on those extreme edges.

Even wide-open at f/4, the lens is exceptionally sharp.p

Nikon says the larger Z-Mount also creates more vibrant images. While it’s tough determining how much of this is from the sensor and how much is from the lens, we certainly can’t refute the company’s statement. In both JPEG and RAW, colors are rich without becoming too saturated or inaccurate.

While the lens will flare if pointed directly into the light, it is nicely controlled in the few times the sun finally decided to come out during our test shooting. Chromatic aberration is also kept to a minimum, which isn’t surprising given the lens’s relatively slow aperture.

The Z 24-70mm f/4 S is a lens that deserves the Nikkor name, even if the relatively slow aperture doesn’t make it all that exciting. It demonstrated both the excellent image quality and fast performance that we’ve come to expect from Nikon. The zoom range, weather sealing, and compact design make it suitable for a number of different types of photography. On on a stabilized Z7 or Z6, it even performs admirably in low light despite the f/4 aperture.

The $1,000 list price may seem a bit high for an f/4, but it is obvious Nikon has worked on enhancing sharpness and minimizing distortion to make this much more than a basic budget option.

That depends on if you want to use an adapter or not. The 24-70mm f/2.8E VR F-fount lens will give you twice the light gathering ability, but it’s more than twice the price and much heavier, especially once you take the adapter into account.

With the Z-mount being so new, third-party manufacturers haven’t yet launched their own lenses. If you don’t want to use the $250 F-mount adapter, then, for now, the Z 24-70mm f/4 S is your only standard zoom option.

Nikon is only on the first generation of Z series cameras — but the Z 24-70mm appears built well enough to go through future iterations, provided it’s properly taken care of. Nikon may release a brighter aperture version (and we hope they do), but it would likely have a significantly higher price point.

Z-series photographers that don’t need a crazy bright aperture but want a versatile zoom should pick up the Z 24-70mm f/4 S. The lens is well made and offers better sharpness and less distortion over budget lenses. Photographers that need that wide aperture may want to hold off, however, and adapt an f/2.8 zoom for softer backgrounds and more wiggle room with the exposure in low light.

Nikon launches the Z9, a pro-grade camera without a mechanical shutter
iPhone in space: SpaceX crew shares Earth image shot on Apple’s handset
Fujifilm’s GFX 50S II is the cheapest medium-format camera ever
Parrot’s 4G-connected Anafi Ai drone is the Google Maps car of the skies
Netflix sheds light on its ‘approved cameras’ for filmmakers
Best Prime Day Drone Deals 2022: What to expect this week
How to remove the background from an image
Instagram boss says to expect even more video content
6 awesome Earth images captured from the ISS in July
This GoPro Hero 10 bundle is $100 off at Best Buy today
The best iPhone tripods for 2022
Watch this Mavic 3 drone soar above the world’s highest mountain
How to watch DJI unveil an all-new drone today