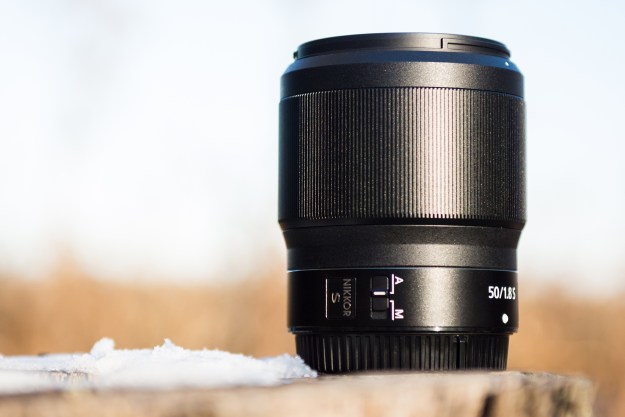 With its giant leap into professional-level mirrorless cameras, Nikon has to prove the new Z series has enough oomph to stay standing when eyed next to the brand’s DSLRs. One of the ways Nikon is doing that — besides features like in-body stabilization — is with the lenses. Although few lenses are available so close to the system’s launch, Nikon hasn’t ignore one must-have focal length for many photographers: the 50mm. Available in December, the Nikkor Z 50mm f/1.8 S promises sharper images and minimal aberration — promises on which Nikon delivered, as we can now confirm in our review based on a final production model of the lens.

The Z 50mm f/1.8 is one of just three lenses announced alongside the new mirrorless bodies, with additional lenses forthcoming. The 50mm shares several similarities to the Z 35mm f/1.8 S with a similar design as well as similar levels of sharpness. If the Z 50mm is any indication, the Nikkor Z line is shaping up to offer even better optics than those available for the F-Mount. However, the pattern so far is that the lenses are also a bit larger, offsetting some of the size advantage of the mirrorless body.

This jump in quality also means a jump in price. The 50mm lists for about $600, putting it several hundred dollars above the F-Mount 50mm f/1.8.

Nikon says the shorter, wider lens mount of the Z series allows for enhanced sharpness and minimal aberration while gathering more light to aid the autofocus system. The new mount is spotted easily by any Nikon DSLR shooter, with a much wider base than that of F mount lenses. The Z 50mm is constructed from 12 elements in nine groups, including two ED glass elements and two aspherical elements. The aperture ranges from f/1.8 to f/16.

The Nikkor Z 50mm f/1.8 S shares the same dimensions as the Z 35mm, which allows photographers to easily swap the same 62mm filters between both lenses. Lenses of equal size are also easier to change out of video rigs, where follow focus systems and matte boxes don’t need to be repositioned.

The similar designs don’t extend to the weight, with the 50mm being a slightly heavier 14.7 ounces. So while the lenses are the same size for some accessories, if you’re using a gimbal, you will need to readjust it. That also puts the weight dramatically above the 6.6 ounces of the F-mount 50mm f/1.8.

We still wouldn’t call it a particularly large or heavy lens, but it’s worth noting the increased size and weight can negate some of the perks of shooting mirrorless. The Nikon Z7 with the Z 50mm together weighs 35.4 ounces. The D850 with the F-mount 50mm weighs 38.9 ounces. Sure, the Z7 still comes out ahead, but not by much.

Part of that additional weight is thanks to the weather sealing. The Z 50mm complements the sealed bodies of the Z7 and Z6 well. It feels solid and durable in the hand, like a high-end, well-built lens should.

The single control ring takes up a majority of the lens, making it easy to find while shooting. The ring is also customizable, with its default setting being focus (just like a traditional lens). But the ring can also be set to control aperture or exposure compensation, which may be more useful if you only shoot in autofocus. The only other control on the lens barrel is the AF/MF switch.

The Z 50mm forgoes the focus distance window found at the top of many Nikon DSLR lenses. Instead, focus distance is displayed in the electronic viewfinder or on the LCD screen, making an on-lens distance scale obsolete.

Nikon says the wider Z mount isn’t just about image quality and brighter apertures (an f/0.95 lens is on the way), but that the wider base allows for more light to aid the autofocus system. In our testing, we found the Z 50mm performed just as well as a DSLR lens in AF-S mode. The lens focuses as close as 1.32 feet away and uses an STM motor for quiet operation.

The Z 50mm delivers excellent sharpness, even at the widest aperture, right out to the edge of the frame.

The lens didn’t seem to have a higher miss rate than the FTZ-adapter-mounted Nikon DSLR lenses that we’ve shot with on the same camera body. Some lenses can struggle in backlighting, and this wasn’t the case with the Z 50mm mounted on the Z6.

Even more impressive, the Z 50mm was able to lock on a subject fairly easily in low light. (Note that this was using the Z6, which has a better low light autofocus than the Z7). The hybrid autofocus systems in the Z7 and Z6 don’t feel quite as capable of locking on quickly in low light, but we shot some impressive low light photos without moving to manual focus with the 50mm. We even shot some impromptu fireworks by focusing on the lit skyline instead of using manual focus. Low light action proved to be a bit tougher for the lens-camera combo, but we were overall impressed with the night images that we managed to shoot handheld.

Nikon largely went to that wider Z mount all in the name of image quality — and it shows. The Z 50mm delivers excellent sharpness, even at the widest aperture, from the center right to the edges of the frame. Shots at f/1.8 were slightly softer at than those at f/4, but almost imperceptibly so.

Chromatic aberration, the colored fringing often found in high contrast areas, is minimal, if you can find any at all. We spotted some green tint at the edges of out-of-focus objects in some extremely backlit shots, and occasionally a tiny bit of green along a hair with an overexposed-to-white background, but the Z 50mm controlled aberrations quite well.

Flare from the Z 50mm ranged from soft white flares to rings of rainbow depending on the intensity and angle of the light. Occasionally, the flare would also create a spot of green or small rainbow outside the flare from the actual light source. In night landscapes, some larger streetlights created a starburst-like flare, but smaller points of light did not.

With an f/1.8 aperture and full-frame sensor, creating a shallow depth of field is easy to do. Out-of-focus areas are overall pleasing, but bokeh towards the edges of the frame takes on a more oblong shape rather than the circular bokeh that’s created closer to the center of the frame. Some high-contrast bokeh had a noticeable hard edge, though in most scenarios it was clean and soft.

The Nikkor Z 50mm f/1.8S delivers excellent sharpness, minimal distortion and solid performance. The lens pairs well with the Nikon Z6 and Z7 as a “nifty fifty,” even if it’s not as cheap as such a lens usually is. The lens is also significantly larger than the F-Mount 50mm, but also has a size consistent with the Z 35mm. Even at $600, it will be a desirable lens for many photographers thanks to its performance and ability to create a shallow depth of field.

The Nikon Z series launched with just three lenses — there isn’t yet another 50mm that will fit on the Z bodies without an adapter. That said, we didn’t notice any performance or image quality issues using an F-mount lens with the FTZ adapter. The Nikon AF-S Nikkor 50mm f/1.8G F-Mount lens is a close competitor in a lighter design. The Z lens does seem sharper than the F-Mount lens, so if sharpness is most essential, the Z 50mm is the better option. The Z lens also has the better build with weather-sealing. The F-Mount is both smaller and cheaper, however, at $220 with sales occasionally dropping the price below $200. Of course, you’ll need to buy the FTZ adapter for it to work.

The Z 50mm is well built and weather sealed. We can’t tell the future, but if properly cared for, we can easily see the lens lasting through several generations of the Z camera bodies. Of course, the series is new, and we don’t yet know what’s in store or how quickly Nikon will roll out updates, but lenses generally have a very long product cycle.

If you want a sharp nifty fifty for the Nikon Z6 or Z7, yes. The F-Mount option can do well with the FTZ adapter if you already have the glass, but the Z 50mm offers a better build and image quality if you can stretch to the higher price point.

Sony’s first drone, the Airpeak S1, rockets to 55 mph in just 3.5 seconds
The Nikon Z 7 II and Z 6 II are coming October 14: Here’s what we want to see
Nikon’s latest optics offer features unique to the Z lens line
Fujifilm’s new nifty 50 f/1 lens can autofocus in near darkness
Netflix sheds light on its ‘approved cameras’ for filmmakers
Best Prime Day Drone Deals 2022: What to expect this week
How to remove the background from an image
Instagram boss says to expect even more video content
6 awesome Earth images captured from the ISS in July
This GoPro Hero 10 bundle is $100 off at Best Buy today
The best iPhone tripods for 2022
Watch this Mavic 3 drone soar above the world’s highest mountain
How to watch DJI unveil an all-new drone today