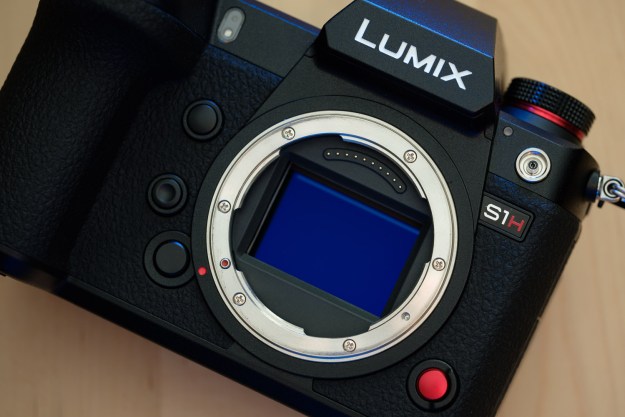 “It looks like a still camera, but the S1H is a cinema camera in disguise -- and a very good one.”

A year into its life, the Panasonic Lumix S1H is no longer alone in terms of professional mirrorless video cameras. Recently, the 8K-shooting Canon EOS R5 and 4K/120p Sony A7S III have stolen headlines, but the world of pro video isn’t just about high resolutions and frame rates. The Lumix S1H remains unique in its role as a true workhorse video camera.

In one way, the S1H actually stands out more today thanks to the presence of younger competitors from Sony and Canon. Its comparatively modest performance — full-frame 6K/24p or 4K/30p, cropped 4K/60p — is actually a signal of Panasonic’s focus on reliability. Sure, there are things the S1H can’t do, but for the filmmaker who just needs detailed, clean, 24p footage, this camera is the obvious choice. In both physical design and software functionality, it is built to hold up to the demands of a real production.

In fact, I would argue the S1H is less of a hybrid mirrorless camera and more of a small cinema camera, despite having the form factor of the former. As such, it is definitely not the camera for everyone — but the $4,000 price tag probably made that clear.

Designed for real life, not a spec sheet

The S1H is built on the same platform as Panasonic’s other S1 cameras such as the Lumix S1 and S1R with a bulky, although ergonomic, design. Physically, it differs in one key area over the S1 with the addition of a cooling fan sandwiched between the back panel and the LCD screen. This fan, more than anything else, is what makes the S1H special. Where other mirrorless cameras can quickly overheat when shooting high-resolution or high-frame-rate video, the S1H can keep on ticking indefinitely.

The LCD screen is also unique, resting in a double-hinged mechanism that lets it directly tilt up and down or flip out to the side. The extra flexibility makes it easier to maneuver around microphone and HDMI cords or anything else plugged into the camera. The top LCD is also larger and shows more information than its counterpart on the S1 and S1R.

Of course, all of this does make the S1H even bigger and heavier than its cousin, the Lumix S1. At 2.56 pounds, it’s not exactly in the same league as the 1.35-pound Sony A7S III. The S1H is a camera that will best serve you atop a sturdy tripod. Again, it’s better to think of it as a miniature cinema camera rather than a hybrid mirrorless camera. Yes, you can take great photos with it — but you probably won’t want to.

Otherwise, the S1H carries over pretty much of all of the design features of the S1, including weather sealing, abundant physical controls, and the beautiful 5.7 million-dot electronic viewfinder. There is one additional difference: Where the S1 and S1R have one SD card slot and one XQD/CFexpress slot, the S1H uses dual SD cards. High-speed V90 SD cards are perfectly fine, even for 6K video, but this does mean you miss out on the insanely fast transfer speeds of CFexpress when it comes to offloading footage to a computer.

A medley of resolutions and frame rates

Panasonic has graced the Lumix S1H with a wealth of resolution and frame rate choices, many of which are nonstandard and all of which come with unique limitations. It’s a bit of a mess, but I’ll do my best to explain each and how it might be used.

Let’s start with 6K. The highest-resolution the S1H can offer with its 24-megapixel sensor, 6K is recorded as 5952 x 3968 pixels, a 3:2 aspect ratio that uses the full sensor area, a recording mode known as “open gate.” That means you’ll need to crop the footage in post to achieve the standard 16:9 aspect ratio, but you’ll have a little room to adjust the framing. If outputting to 4K, you’ll also have some flexibility to crop.

But Panasonic didn’t stop there. Nearly a year after its announcement, the S1H received a firmware update adding 5.9K RAW video output over HDMI (and yes, the S1H features a full-size HDMI port). With an Atomos Ninja V or another compatible recorder, footage is saved in the Apple ProRes RAW format. RAW video is not for the faint of heart, but this feature has made the S1H even more valuable for professional customers.

Interestingly, that same 5.9K RAW output is also coming to the newer, and much cheaper, Lumix S5.

I shot a mix of full-frame 4K/24 and cropped 4K/60 and was really impressed with the results of both. The S1H offers Panasonic’s “true” V-Log profile, not the V-Log-l of the GH5 series, which means it should match up to a Panasonic VariCam cinema camera. The company claims 14 stops of dynamic range, which is simply fantastic for internal, non-RAW recording. From skin tones to vibrant details, I really like the colors that come out of the S1H. Note: I was unable to get an Atomos recorder in time for this review so have not yet tested the RAW output — although I’m not sure if my 8-year-old computer would even be up to the task.

Strictly speaking, I don’t think many people will have a need for the 6K mode. It’s overkill for most of us. But I’m glad Panasonic included it. For one, some customers will love the crop and reframe ability of 6K open-gate recording. Additionally, by outputting the full 5.9K instead of 4K for RAW, Panasonic can avoid the problems that arise from line-skipping that plague the Nikon Z 6, another 24-megapixel camera with RAW output but which is limited to 4K resolution. Requiring just 8 megapixels, outputting 4K from a 24MP sensor means many pixels simply get ignored, leading to a softer image than what 4K is actually capable of.

Internally, the S1H uses the same codec as the GH5, but its larger sensor, and the use of the full V-Log profile, allow you to get more out of it. Assuming you started with a halfway-decent exposure and white balance, you’ll have no problem grading the footage to get the look you want.

I said the S1H is best used atop a sturdy tripod, but I actually shot it handheld for the most part. Thanks to the in-body stabilization, handheld footage is smooth and natural, but the weight of the camera — especially outfitted with the large Lumix S 24-70mm f/2.8 lens, provided for this review by Lensrentals — will certainly make you want to limit handheld use as much as possible.

The large, top LCD and the placement of the controls make for a great user experience. Buttons can easily be reprogrammed simply by holding them down and selecting a new option from the resulting menu. The user interface is one of the more intelligently thought-out designs of any camera, and makes navigating the S1H’s many settings and sub-menus a breeze.

If there’s one potential red flag, it’s autofocus. Panasonic’s unique focusing system, called Depth from Defocus, simply can’t keep pace with the phase-detection systems of Sony and Canon. A pending firmware update will bring the improvements introduced in the Lumix S5, which is certainly welcome, but I still found that camera to lag behind the competition.

To be clear, I don’t think the type of fast, accurate, eye-tracking autofocus required by one-person YouTube crews is really a make-or-break feature in the world of professional video and cinema Panasonic is targeting with the S1H. Still, it’s something to be aware of as it does limit the situations in which the S1H can be effective.

The Lumix S1H is a camera that only Panasonic would build. Like the Micro Four Thirds Lumix GH5S, the S1H has a narrowly defined target customer in the video professional, and yet still carries over all of the still photo functionality of a high-end hybrid camera. That makes it a bit of an oddity, and some filmmakers will undoubtedly wonder why they shouldn’t just invest in a cinema camera — but where will you find a full-frame, 5.9K RAW cinema camera with image stabilization for $4,000? You won’t. Even after factoring in the cost of an external recorder, starting at about $600, the S1H is a bargain for what you’re getting.

There’s a reason Panasonic hasn’t dropped the price of the S1H after being on the market for a year, even with the Sony A7S III coming in below it at $3,500. No other hybrid camera has put so much emphasis on reliability and practicality, nor mixed that with such a variety of standard and anamorphic frame sizes. I wish 4K/60 could be recorded without the crop, and Panasonic’s autofocus leaves room for improvement, but these won’t be issues in most production environments for which this camera is intended.

If I were to start a YouTube channel, I’d reach for the A7S III — but if I were to produce a film, then there’s no camera I’d rather have on my set than the Lumix S1H.

Some creators may prefer the Sony A7S III if they need higher-frame rate 4K or more reliable autofocus, but the most intriguing alternative comes from Panasonic’s own camp. The Lumix S5 will receive RAW 5.9K output later this year, which should give it equal video quality to the S1H for those who don’t mind using an external recorder. You’ll have to make do with its pitiful Micro HDMI port, but with a cost of just $2,000, that’s not a bad deal.

The S1H is a professional machine built to hold up to the demands of such customers. While 8K cameras are on their way — and no, you don’t need one yet — 4K and 6K will continue to be more than enough resolution for the foreseeable future. There’s no reason the S1H won’t remain viable for many years to come.

Monster Hunter Rise: How to start the Sunbreak DLC

Have power anytime, anywhere with the new EcoFlow Power Kits