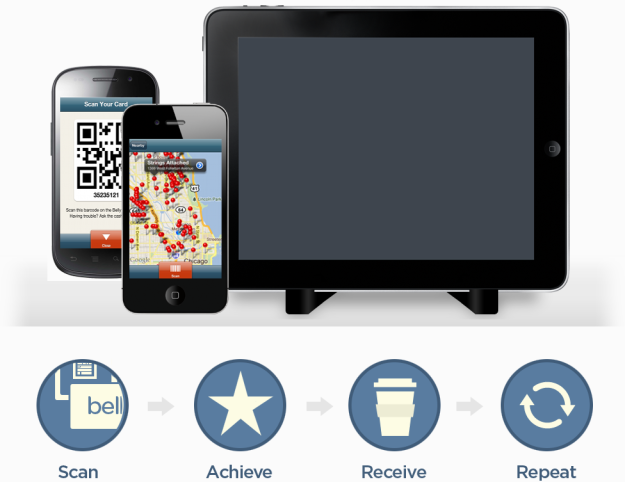 Since location-based deals first appeared on the horizon, a new wave of e-commerce companies have been making a play for small businesses’ business. The likes of Groupon, Google Offers, and LivingSocial (and the endless amount of clones) have been leveraging their assets to convince local retailers that they have what it takes not only to increase sales but to add a little social flare to the companies in question.

How effective this is has been heavily debated. It’s gotten to the “Groupon is bad for America!” point for detractors, who argue this discount-based culture is creating a dangerous attitude in consumers and a risky business model for retailers. Vendors are largely fed up being asked to participate with these various daily discount sites and increasingly wary of the effects: who is this setup really benefitting? Who is getting the return customers?

Enter, Belly.  The rewards-based service, which launches today, wants to replace the stamp card, and actually helps small businesses attack the digital incentive market. Step one: outfit participatng retailers with an iPad (yes, that comes with your membership).

After that, the basics of Belly might sound fairly familiar to other mobile payment platforms. Retailers pay per month for cards, marketing materials, and customer data software. Consumers can use one of the provided cards or the smartphone app (available for Android and iPhone) to scan their participation per visit and point of sale. You can also use the Belly-provided iPad as well. This, of course, leads to loyalty rewards.

Belly offers a free trial as well, so getting up and running seems relatively pain free for interested merchants. And it’s unequivocally easy for consumers as the smartphone app will tell you the participating stores in your area. It’s a welcome alternative for users who appreciate the benefits of Foursquare and like-minded apps but get lost in all the other platforms these check-in services try to tie themselves to.

We’d expect some resistance on the retailer end. This sector has grown incredibly disenchanted with anything even resembling a daily deal service, so Belly might have something of an uphill battle initially. But apparently it’s been growing quickly: according to company’s press release, “In just 12 weeks since its pilot launch, Belly has already racked up more than 18,000 users and 50,000 check-ins. Many stores are seeing more Belly check-ins than all other check-in services combined.”

Also a positive indicator of Belly’s potential is a recent, generous investment from Lightbank (a venture firm from former Groupon executives). In all the local-meets-e-commerce-meets-social chaos from the past few years, it’s difficult to pick out a sustainable model that benefits buyers and sellers equally. Belly could be a step in the right direction.