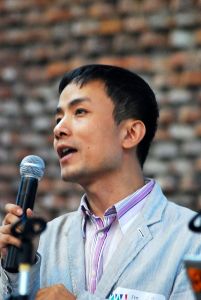 Anti, a well-established and highly respected blogger and journalist whose legal name is Zhao Jing, had his Facebook profile page shut down by the company in January. Officials sent Anti an email, which explained that Facebook does not tolerate the use of pseudonyms, and profiles must be made under the name written on a government issued ID.

For more than a decade, Anti has used a pseudonym to publish a wide variety of articles and essays, which have focused primarily on freedom of the press in China. Anti’s work has earned him fellowships at both Cambridge University and Harvard University. He has written articles for publications like The New York Times and the Washington Post, all under the Anti name.

By blocking Anti from access to his page, Facebook cut off his ability to connect with more than 1,000 professional contacts that know him by that name, he said.

“I’m really, really angry. I can’t function using my Chinese name,” Anti told CNBC in an interview. “Today, I found out that Zuckerberg’s dog has a Facebook account. My journalistic work and academic work is more real than a dog.”

In the email to Anti, Facebook said that “personal profiles must always be set up in the real legal name of the individual concerned” in order to keep things “simple and fair” for everyone. Facebook’s director of international communications and public policy, Debbie Frost, added in a comment to the Associated Press that the real-name rule is also at the recommendation of “a number of safety and child protection experts.”

Dissidents like Anti argue that the policy endangers human rights activists by requiring them to reveal their true identities.

This isn’t the first tim Anti has had difficulties with a major technology corporation. In 2005, Microsoft deleted his blog after receiving pressure from China’s government to do so.

If Facebook allows Zuckerberg’s pup Beast — who, of course, has no government ID at all —to remain on the site, it will be interesting to see if their policy changes to give people like Anti an chance to connect.

Zuckerberg stands by Facebook’s policies as employees revolt, quit
Zuckerberg: Facebook wouldn’t have fact-checked Trump
Zuckerberg reveals true scale of battle against misinformation
Facebook bug caused valid coronavirus articles to be marked as spam
Twitter profiles for businesses just got way more useful
How to post on Reddit: everything you need to know
This Twitter vulnerability may have revealed owners of burner accounts
A new Snapchat feature lets parents see who their teens chat with
Yes, Twitter is down right now, and we don’t know when it’ll be back
WhatsApp adds new privacy features that everyone should start using
Snapchat is down right now. Here’s what we know
The more Instagram copies TikTok, the more I hate using it
Elon Musk hints that he could start his own social media platform