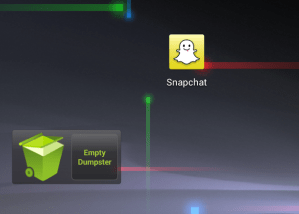 Privacy and Snapchat? Please … Snapchat offers as much privacy as Facebook (which means, not much). Your friends are free to grab screenshots of any lewd and lascivious behavior as they wish; not to mention, there are more ways than one to save a video. Well Snapchat fans, we’re sorry to say we’ve found another method to retrieving “self destructing” Android Snapchat videos, and it’s really, really easy to do.

Dumpster, an Android-only app that launched early last month, is a digital trash bin for the Android OS “as seen on your personal computer,” as its tagline says.

Why would you use it? Say you accidentally, for some reason deleted an important file and wanted to retrieve it – Dumpster can bring it back. “Dumpster is acting as a background service on the Android device and in case of a file delete, it responds by saving the deleted content aside,” Dumpster CEO and co-founder Alik Hochner explains. And users love the app. Hochner says that Dumpster has 406,191 downloads as of June 1.

Now, a neat trick that Hochner discovered purely by happenstance just a month ago was that his app was actually picking up “deleted” Snapchat videos and storing it aside with Dumpster. While Hochner declined to comment on how exactly Dumpster was able to store these videos pending his software patent, he did say that Snapchat was saving temporary videos on the Android SD card. Dumpster isn’t able to retrieve photos on the other hand since that’s saved on the phone’s internal storage.

All it takes to restore a Snapchat video file (and watch it as many times as you want and as long as you want) is a single tap on the file when you open up Dumpster. Facebook Poke isn’t available for Android yet, but he suspects that Dumpster would be able to retrieve self-destructed Facebook Poke videos as well.

It’s just the latest security loophole for Snapchat. Even still, Snapchat doesn’t seem to really care that people are finding ways to retrieve expired videos. The company’s spokespeople have typically brushed off these privacy issues as nothing more than party crashing – ruining the fun of using Snapchat in the first place – and warned users not to publish anything that would embarrass or ruin your life.

We can blame technology all we want, even if you now know how to save videos. But at the end of the day, it’s your friends (and people for that matter) that really should be the ones to blame. The safest way not to get embarrassed by Snapchat is not record anything embarrassing … and know who you’re sending Snaps to very, very well.

You can also check out the video below of Hochner demoing the ability to retrieve Snapchat videos with Dumpster:

SnapChat video caught in the Dumpster from a+ on Vimeo.

How to use Twitter Advanced Search
What do the eyes mean on your Snapchat Story?
WhatsApp down globally Tuesday morning
YouTube brings pinch to zoom and video navigation changes to everyone
TikTok is launching a dedicated gaming channel
Elon Musk finally in charge of Twitter, reports say
Elon Musk officially owns Twitter now: a timeline of how we got here
Twitter to start charging for verification mark, reports say
Having trouble accessing your Instagram account? You’re not alone
Elon Musk considers bringing Vine back from the dead
Staying on Twitter? Here are two ways to make it easier
Elon Musk now Twitter CEO after firing entire board
Twitter Blue is losing Ad Free Articles and Musk’s latest tweets indicate further changes