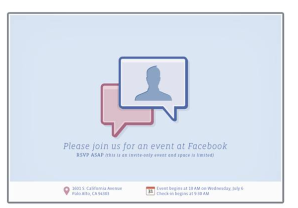 Amidst the intoxicated love-fest over Google+, Facebook is trying to steal back a ray of spotlight with an “awesome” mystery announcement on Wednesday. There is understandably a great deal of speculation surrounding what it might be (check out our round-up here), but there’s one possibility that seems to have struck a chord: Skype-powered video chat built directly into Facebook.

That rumor comes from a report by Michael Arrington at TechCrunch, who spoke with “a source with knowledge of the partnership.”

On top of the “in browser” aspect, the new video chat service will also have a “desktop component,” according to the source, though it’s not entirely clear what that means. Though Arrington says that one thing is for certain: “there’s very deep integration between the products, and from the user’s perspective, the product will be an in browser experience.”

The timing of this release is curious, as a big part of Google+, Google’s new Facebook competitor, is “Hangout,” a built-in group video chat feature that works excellently. If video chat is Facebook’s big news, it better hope that whatever it releases blows the pants off Hangouts, otherwise it’ll only be a matter of moments before people start declaring Facebook behind-the-times.

That said, there’s a good chance such a service would work excellently — Skype and Facebook are at the top of their games, with 170 million people on Skype and 750 million on Facebook. Google+ can’t compete with those numbers — even if it were to open the floodgates of its walled social network city right now, and let everybody who wants to join come in.

Regardless of what Facebook plans to announce, its even will take place on Wednesday at 10am PST/1pm EST. Watch the “Product Announcement” event live here.

P.S. If it seems as though the only things happening in the world of tech this weekend are related to either grilling and fireworks or Google and Facebook, it’s because they are. And we’re sorry.

Topics
WhatsApp down globally Tuesday morning
YouTube brings pinch to zoom and video navigation changes to everyone
How to create multiple profiles for your Facebook account
Reels are about to show up in yet another Facebook feature
How to use Twitter Advanced Search
Twitter to start charging for verification mark, reports say
Having trouble accessing your Instagram account? You’re not alone
Elon Musk considers bringing Vine back from the dead
Staying on Twitter? Here are two ways to make it easier
Elon Musk now Twitter CEO after firing entire board
Twitter Blue is losing Ad Free Articles and Musk’s latest tweets indicate further changes
Clear Mode on TikTok: Here’s what it is and how to use it
Twitter’s edit button could soon be free for all users