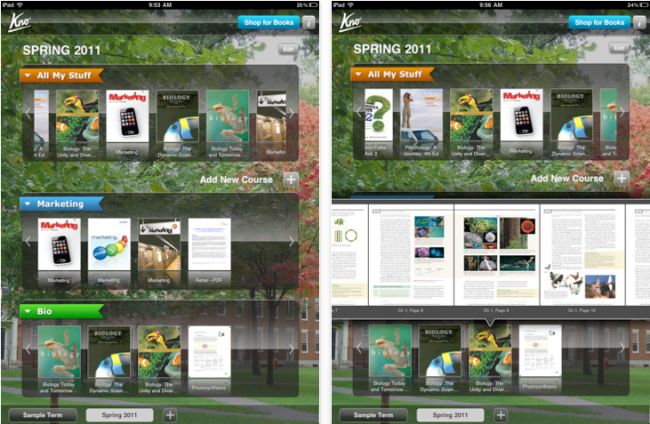 College students, rejoice! Access to massively discounted textbooks just got a little easier with Friday’s late-night release of the Kno textbook app for the iPad. The Kno app offers customers “the world’s largest selection of over 70,000 titles at 30-50% off the list price.” As we all know, 30 to 50 percent off a text book can buy a lot of Ramen.

The app also comes loaded with a full textbook and PDF reader; a course manager, which allows users to organize their textbooks by class and term; one-touch text highlighting; annotation capabilities; and the ability to “ask questions, post comments or share your location with study buddies,” according to its Apple App Store listing. (TechCrunch says this feature, aptly named “WTF” or “Words to Friends,” doesn’t really work well in its current form.)

Since the app was only released mere hours ago, it only has 18 reviews (at the time of this writing) on the App Store. Of those, 11 gave the app five stars. But one reviewer said that, while the app was good, it was a bit too “laggy” on his iPad 2.

Back in 2010, Kno announced plans to release its own line of tablets, including a gigantic two-screen version — each screen measured 14.1-inches with a 1,400×900 resolution — that received much attention. But this February, Know reportedly decided to scrap its hardware business to focus solely on software development.

The Kno tablets may not be entirely dead, however. In April, rumors surfaced that chip-maker Intel and Advance Capital, which owns publishing powerhouse Conde Nast, planned to take over design and production of the tablets. The two companies reportedly invested $30 million towards the endeavor.

For now, though, students will simply have to pick up an iPad or iPad 2 to enjoy the savings discounts afforded by the Kno app, which, of course, is free.