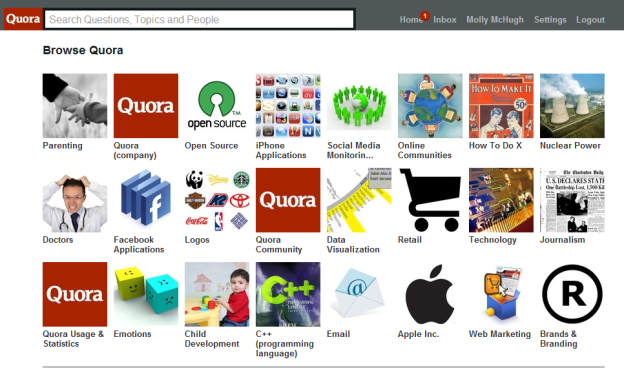 Q&A remains a somewhat confusing, muddled platform that retains a mix of highly devoted users and occasional wanderers. But Quora in particular has struck a chord and become a hub of industry insiders who use the site to glean details about the tech community and occasionally post novel-length answers.

While a niche following is nice, widespread user appeal is better. First-time visitors often feel isolated by the site’s user interface, and the conversations are sometimes so specific that it almost makes you want to go to Yahoo Answers for anything you’re worried would be seen as simplistic. To this end, Quora is obviously trying to user-friendly up its layout and draw in a different crowd.

To address the slew of unanswered questions that plague the site, Quora has introduced a bartering system where you turn Q&A into a game and can request specific users to answer your questions. And now the site has launched a browse feature to give users new and old alike a jumping off point. The site’s increasingly being used for research, and you can often  find comments and insights from incredibly relevant resources (like Robert Scoble, Fred Wilson, and even Mark Zuckerberg) by trolling Quora.

Browse takes some of the grunt work out of it, with icons and popular topics arranged in a grid. Clicking on the respective icon reveals popular questions about the topic. The site is clearly evolving from its almost encyclopedia-like origins, into something more eye-catching and dare we say it, easier to use for newbies. The element of exclusivity might be fading a bit with the site’s new approachability, but we don’t think that will have any effect on the actual content. Which means Quora may have struck a compromise that will lure new users without isolating its old ones, something many doubted it could do.