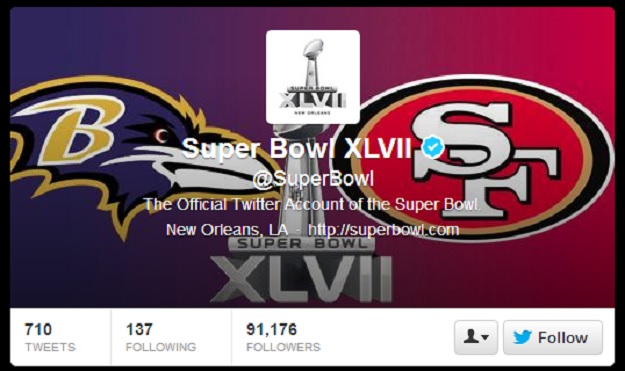 The Super Bowl has come and gone, but not without dramatic flair. Between the electrical outage, the 49ers near comeback, and the mystical alien-meets-angel entity that is Beyoncé, Super Bowl XLVII offered plenty of entertainment – and apparently kept us talking and typing. In true Twitter fashion, the microblogging platform has released some numbers and details about the day, including:

Advertising was naturally a major part of the game. This was the year commercials had pre-event advertisements as teasers … seriously. But the power outage managed to steal their thunder: A handful of brands were able to capitalize on the awkward moment with some incredible quick thinking. Check out these seriously topical promos that hit the Web while the lights were out:

Power out? No problem. twitter.com/Oreo/status/29…

We can’t get your #blackout, but we can get your stains out. #SuperBowl #TidePower twitter.com/tide/status/29…

Also getting some attention? The alleged Beyoncé wardrobe malfunction. Sure, it’s no Janet Jackson moment, but there’s already plenty of talk around the World Wide Web about an intimate moment we may have quickly witnessed.

Perhaps the only thing that could have distracted us (but really, could it?) is straight-laced, almost-boring Joe Flacco’s very obvious F-bomb. Oh CBS … we suppose it’s nice to know there’s someone out there having a worse Monday than the rest of America.

Instagram also released some Super Bowl related stats: “Over three million photos that mentioned Super Bowl-themed words in their captions were shared today; and at peak, more than 450 photos about the game were posted every second. During the halftime show, over 200 photos per second were posted about Beyoncé (@baddiebey) alone.”

The photo-sharing network also commented on CBS using Instagram images (from the Ravens and 49ers players – don’t freak out about the company taking users’ photos) in its pre-game show and Oreo’s Instagram contest. If that’s not a sign of the times, we’re not sure what is.

To sum things up a little and add some perspective, Twitter was mentioned in 50 percent of commercials during the game, Facebook in 8 percent… and Google+ went home empty-handed. And there you have it: Super Bowl XLVII and all the social stats that went with.

Topics
Miss Netiquette’s guide to dealing with your family on social media
Instagram your way to meeting Bieber, and other social ways to win this week
Statistically, these are the best and worst Super Bowl XLVII ads
What the Superdome control room looked like during the Super Bowl blackout
Elon Musk finally in charge of Twitter, reports say
Elon Musk officially owns Twitter now: a timeline of how we got here
How to use Twitter Advanced Search
Twitter to start charging for verification mark, reports say
Having trouble accessing your Instagram account? You’re not alone
Elon Musk considers bringing Vine back from the dead
Staying on Twitter? Here are two ways to make it easier
Elon Musk now Twitter CEO after firing entire board
Twitter Blue is losing Ad Free Articles and Musk’s latest tweets indicate further changes