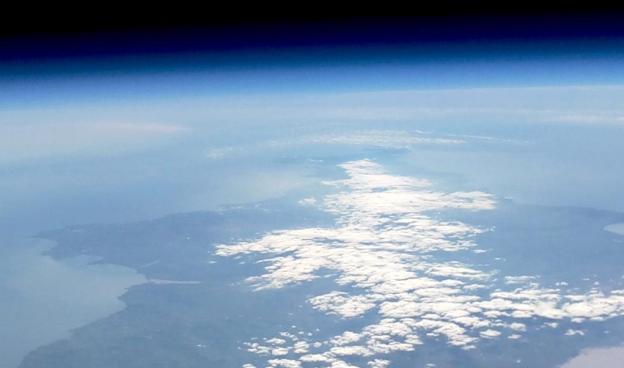 One of the marvelous things about the dirt cheap $25 Raspberry Pi computer is that if you accidentally destroy it during some adventurous endeavor involving the device, you won’t have lost too much.

This may or may not have crossed the mind of Dave Akerman recently when he sent his own Raspberry Pi into space, together with its recently launched $25 5-megapixel camera. As part of his cleverly titled Pi in the Sky project, Dave wanted to see if he could use Raspberry Pi to take pictures of Earth from space, at the same time transmitting the images back to computers on the ground.

After attaching the camera module to his modified Raspberry Pi computer and housing it in a case built deliberately to look like a particular fruit – the name of which you can most probably guess – Dave sent the whole lot skyward with the help of a weather balloon.

As the contraption gained altitude in the skies above southern England, with the camera snapping photos every minute or so, Dave managed to successfully receive low- and medium-resolution images back to his ground-based computer. He was also capturing high-res images on the camera’s SD card for later viewing.

Three hours after launching the credit-card-sized Raspberry Pi into space, the computer and camera crashed back to Earth. However, Dave, who was hoping to recover his equipment, lost the signal soon after it landed.

“It seemed very unlikely to me that the radio transmitters had stopped working altogether – the batteries were soldered on so it would need a really hard impact to break the connection,” he explained in a blog post detailing his project.

“I was about ready to declare the payload lost when my mobile phone rang. It was someone who asked if I’d lost ‘a parachute with a raspberry and a big lump of latex’. My payload had been found!” Of course, Dave had sensibly written his phone number on his raspberry-shaped casing before launch.

Also, the Raspberry Pi was, to his delight,  still working – the signal had been lost because the guy who’d discovered it had taken it home, taking it out of range of Dave’s tracking equipment. For the Raspberry Pi enthusiast, it was mission accomplished.

Whether Dave’s successful tech challenge inspires others to try something themselves with Raspberry Pi remains to be seen, but his account of the project makes for a fun read, with his enthusiasm evident throughout. There are plenty of photos documenting events, too.

Many people around the world have been finding all kinds of innovative ways of using the Linux-based Raspberry Pi computer, from powering a computer lab in an underdeveloped African village to, somewhat bizarrely, the creation of a beer keyboard in Romania.

How to watch SpaceX launch a German radar satellite this morning