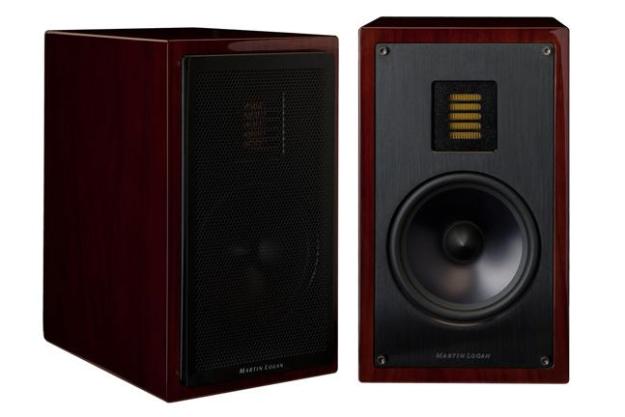 “The LX16 are absolutely worth a listen. In a market already flooded with over-achieving bookshelf speakers, the LX16 manage to stand apart from the rest.”

Like many others, Ihave long associated Martin Logan with extremely pricy electrostatic speakers. The very name evokes visions of statuesque electrostats with prohibitive price tags and a sense of longing that I will probably never be able to satiate. Sometimes it sucks to be a speaker geek on a tight budget.

Or does it? Plenty of speaker manufacturers have decided to bark up the bang-for-your-buck tree, and it would appear that their efforts are getting a warm reception, since the number of offerings in this category is expanding at a quick clip. Martin Logan is one of those companies that seems to see the value in trickling down its trademarked technology to a thoughtfully designed, high-performance line of (shall we say) more accessible speakers.

Motion is the name Martin Logan gave to this series of speakers. One of the latest additions to the series is the LX16, Martin Logan’s first bookshelf speaker which is also a bit of a departure from the Motion line in general. It’s got fancier woofers, a premium finish and some impressive specs; all at what seems like a pretty reasonable price. The question that has been lingering in my mind since I first saw the LX16 at CEDIA 2011 and again at CES 2012 is: Do they deliver the wow factor I’ve come to associate with the company’s premium electrostatic speakers?

In this Motion LX16 bookshelf speaker review, I dig into some of the design points that are meant to make these speakers sound great, describe my experience evaluating them and reveal whether or not I think Martin Logan hits the price: performance sweet spot.

There just isn’t a whole lot to the LX16 de-boxing process. The speakers were adequately packaged with EPS foam caps on the top and bottom of the speaker. To protect the finish (and oh, what a finish it is!), the speakers were wrapped in a thin cloth sack followed by a thicker plastic bag. The grills for the speakers are wrapped separately, probably to prevent potential breakage in transit.

Along with the speakers were some brief pieces of product literature and a card of self-adhering rubber feet for the bottom of the speaker.

At the heart of the Motion series’ design is Martin Logan’s “Folded Motion Tweeter.” Rather than use a dome of silk, aluminum or titanium, Martin Logan uses a sheet of material that is folded up like an accordion. Now, imagine that accordion being compressed and released. As it does so, air is moved out from between the folds, thus producing sound.

This tweeter design is an example of that “trickle-down technology” idea I referred to earlier. Essentially, Martin Logan has taken the scientific principles and sonic benefits of its electrostatic speakers and altered it to work in a more compact environment. According to Martin Logan, this tweeter has roughly eight times the surface area of a 1-inch dome tweeter, is more efficient, and much faster to respond. The end result is supposed to be very clear and dynamic high-frequency response with exceptional imaging properties.

Sitting just below the tweeter is one 5.25-inch black-aluminum “high-excursion” woofer. This differs from previous Motion series speakers that used paper cones. (As a side note, some prefer aluminum cones for their combination of high rigidity and low weight while others swear by treated paper. In our experience, it isn’t the material that is used, but how you use it that matters.)

The drivers are set into an attractive brushed black-aluminum baffle that sits flush with the speaker’s cabinet. Sitting over the drivers (should you choose to cover them up) is a perforated metal grill that attaches to the speaker’s baffle via four small magnetic posts. In our experience, magnets hold up much better to repeated grill removal and replacement than plastic posts do. On the rear of the cabinet we found the speaker’s “low-turbulence” bass port and a recessed panel with five-way binding posts. They use some sweet twist-on lugs that made using bare wire a lot easier for me when it was necessary.

The finish on theLX16 is impeccable. Martin Logan offers two finish options: high-gloss dark cherry wood and high-gloss black. Our review samples came in the dark cherry option and boy did they ever feel luxurious. You can’t fake this kind of finish with vinyl. Martin Logan takes real wood veneer and lays it over ¾-inch thick MDF to give the speaker’s cabinet the right balance of acoustical inertness and furniture-grade appeal. We’ve seen similar high-gloss black finishes from other manufacturers, but the deep, dark cherry color is a welcome break from the medium-tint stuff we’ve been seeing for the past 10 years.

It’s easy to get jaded by all the marketing-speak surrounding speaker technologies. To a certain extent, I can understand the use of high-tech jargon in order to make a product sound appealing. After all, fundamentally speaking, loudspeakers haven’t changed all that much in the last 50 years. This is the sort of tactic that has produced the six-blade disposable razor with aloe and built-in aftershave. It just gets old after a while.

Perhaps that is why I was so elated when I heard the LX16 emit their first notes. This folded-motion tweeter of Martin Logan’s is more than just nifty nomenclature; it is a distinct and downright sweet-sounding tweeter. What really did it for me? Transient response.

For those not down with the audiophile sickness, here’s a 101 breakdown on transients and transient response: In audio terms, a transient refers to a sudden and abrupt change in level. In music terms, we usually call this “attack”. Whatever you call it, it’s the snap of a stick hitting a cymbal or snare drum, the creak of a bow across a violin string or the ‘T’ , ‘S’, or ‘CH’ sounds of a person speaking or singing. It’s not a tone: You can’t assign a transient a note,it’s just the start of a sound. A speaker’s ability to reproduce these sounds is referred to as transient response.

So now that you know, let me just say that the LX16 have really fantastic transient response, which means they produce well articulated, highly textural, engaging and realistic sound. I often end up complaining about spitty, harsh and unrealistically bright treble coming from the speakers and headphones I review. I think this is because so many manufacturers are trying to achieve a certain sound without having the right materials or technology to make it happen. In their effort to fake it, we end up with crappy treble. Simply put, the LX16 do right what so many other speakers get wrong.

Fortunately, the accolades don’t stop with the tweeter. The midrange response of this speaker is remarkably natural, easy-going and big, too. I listened to some live bootleg tracks of Marc Broussard and his band that were ripped right off the soundboard at the gig. With no post-processing getting in the way, the sound of the track is as close as we’re likely to get to listening directly to a microphone’s output. Broussard’s husky vocals came through the LX16 with stunning purity and clarity. We kept listening for a bit of a hump in the upper midbass, but it never came.

In my dedicated testing space, I have some basic acoustical treatments to control room resonances and early reflections off the walls. I also have the benefit of using sand-filled speaker stands and the luxury of achieving precise speaker placement.

In my office, on the other hand, I contend with about as uncontrolled an environment as you could imagine. Huge panes of glass line one wall while long, flat sheets of drywall occupy the balance. I’ve got no speaker stands–just a desk– and the only “acoustical treatments” to speak of come in the form of some strategically placed office chairs. In short: It’s not an ideal space for testing quality audio gear. Oh, did I mention the jackhammer we’ve been dealing with this week?

I digress. The reason I mention the two drastically different environments is because each had a noticeable effect on the LX16’s bass response. In my dedicated listening space, I was able to maximize the LX16’s bass output and the result was pretty impressive. In fact, I placed the LX16 next to a set of large floor-standing speakers and kept inviting people down to guess which speaker was playing. 8 out of 10 guesses were for the towers; the other two just thought they were smart. My point is the LX16’s sound on the whole was big enough to fool people into thinking it could have come from large, floor-standing speakers.

In my office, some of that bass presence was lost. I actually found myself adjusting the bass control knob on my Marantz PM6004 to coax a little more bottom end out of the LX16’s; and this from a purist who never touches the tone controls! What I gathered from my experience is that the LX16 put out a respectable amount of bass for a bookshelf speaker, but, unless precise placement can be had, a subwoofer may be desired for those who really crave big, room-moving bass.

One final story: I cranked up (and I mean I really cranked up) a solo electric bass track off of Marcus Miller’s The Sun Don’t Lie record. It’s a go-to test track for me. Within a few seconds, passersby were opening the door to see if someone was actually playing bass in the office (it’s been known to happen, actually). The consensus amongst my office mates was that the LX16 were producing some extremely realistic, dynamic sound. I think that describes these speakers perfectly.

While other speaker companies such as NHT and Aperion Audio do offer beautifully finished high-performance bookshelf speakers at slightly lower price points, what they don’t offer is Martin Logan’s folded-motion tweeter and the distinct sound that comes with it. Is it worth the extra bills? I’ll leave that to individual listeners, but I will say that I have become somewhat addicted the sound of the LX16 and find my mind referencing back to that sound with every speaker I listen to now.

Earlier, I questioned whether the LX16 delivered enough wow-factor to justify their $800 a pair. For me, they most certainly did. The LX16 are absolutely worth a listen. In a market already flooded with over-achieving bookshelf speakers, the LX16 manage to stand apart from the rest and for that, we recommend them.