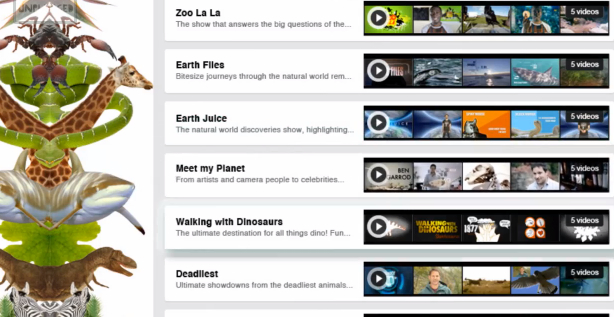 If there’s one area of programming at which the UK’s BBC really excels, it’s nature shows. The publicly funded corporation invests heavily in such material, bringing to the screen incredible wildlife photography we’d otherwise never get to see.

These include Earth Juice, a news show looking at the latest discoveries in the natural world, including items “from bees that have produced blue honey to uncovering the real life vampires in the animal kingdom.”

Meet My Planet features people who’ve been inspired in some way by the natural world, with segments about explorers, naturalists, filmmakers, artists and musicians, among others.

There’ll also be shows about dinosaurs, a weekly look at different kinds of unique animal behavior and a show called Earth Files, which “takes iconic nature stories and gives them a unique digital makeover, fusing high-end graphics and surprising music with beautiful photography to create a brand new experience.”

In an apparent bid to avoid alienating YouTube fans who love to spend hours trawling through the video streaming service in search of films of cute baby animals, the BBC has decided to include a show called Amazing Baby Animals featuring “stunning” films of, that’s right, cute baby animals.

Each Earth Unplugged show runs for under five minutes – in many cases for just a couple of minutes. While adults can enjoy the shows, the snappy presentation style and engaging content is bound to appeal to children interested in the natural world too.

Commenting on the new channel, Amanda Hill, managing director for BBC Earth at BBC Worldwide, said: “With Earth Unplugged we’re seeking to connect a new audience with the world around them. YouTube offers a fantastic opportunity to reach people and grab their attention with innovative nature content that will captivate and inspire.”

The BBC already operates a number of YouTube channels – Top Gear and Doctor Who among them – though these feature clips pulled from already-broadcast shows. Earth Unplugged features original programming only.

How to try YouTube’s new video download feature for desktop

Reports of the demise of iconic YouTube video may be exaggerated