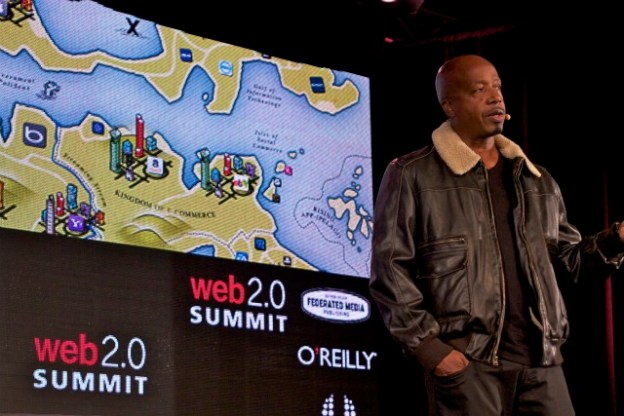 MC Hammer is getting into the search business. The former rapper and harem pant enthusiast announced his new search engine venture, called WIREDoo, on Wednesday at San Francisco’s 2.0 Web Summit.

The search contender is currently in pre-beta and not available to the public. WIREDoo, according to Hammer, will be more focused on deep search or relationship search as opposed to Google’s keyword and link related searches. Though he said it wasn’t a “competitive attempt to recreate search”, aware of Sergey Brin’s presence backstage, Hammer did say this was an attempt to make the search experience “better”.

MC Hammer gave an example using a zip code search of 90210 which popped up schools, homes, crime rate; drilling deeper into schools revealed truancy rate, SAT scores, average parent’s education plus more relevant data and that was only the beginning of the deep search. Another example using the Apple stock symbol showed all the mutual funds invested in the company, shares held and percentage of volume change.

WIREDoo’s tagline: Search once, see what’s related. Hammer emphasized that engine’s point was to offer results beyond the general.

Hammer, born Stanley Burrell, a Bay Area native from Oakland, Calif. was influential in taking rap music mainstream, but sadly went bankrupt in 1996. The former rapper said he came upon this two-year search project “toiling” around in the valley, spending time with young startup CEOs.

The 2011 Web Summit 2.0 theme was “The Data Frame” and focused on consumption of data and the impact on the current economy. Other notable guests include Michael Dell, Steve Ballmer, Foursquare founder Dennis Crowley and 4chan’s Christoper Poole.

Burrell closed his presentation saying, “No one one’s playing for single’s in the valley anymore, everyone is playing for the… big win.”

Privacy-focused DuckDuckGo added to Chrome as a default search option