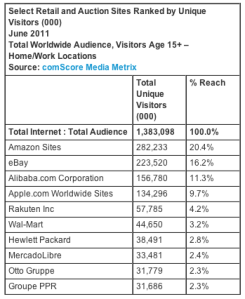 Google may hold the title belt for most visited website in the world (especially if you consider it owns the YouTube and Blogger domains), but new data from comScore has shown that if you’re shopping, you are likely doing business with Amazon. The ecommerce giant saw over 282 million unique visitors in the month of June; eBay was not far behind 223 million.

Those two alone account for 36.6 percent of ecommerce traffic worldwide (20.4 and 16.2 respectively).

Apple surprisingly held the number four spot with over 134 million visitors. One doesn’t think of regularly going to Apple.com but when you consider the traffic of the iTunes and the App Store, the picture begins to make more sense.

“While retail e-commerce has already grown to become a $150+ billion annual industry in the U.S., it still presents enormous upside opportunity across much of the globe,” said Gian Fulgoni, comScore co-founder and chairman said in the press release.

The Alibaba.com Group was the number three trafficked site with 156 million unique visitors with 85.7 percent of those shoppers from Asia. The Chinese ecommerce giant—operating under roughly the same model as Amazon.com—has only seen 4.5 percent of its traffic from North America.

Globally, Asia accounts for 41.1 percent of ecommerce traffic and North America only 14.9 percent. Alibaba.com may be confined to one geographic market, but it’s a big one.

These Chrome extensions will put cash-saving coupons right in your browser
Amazon is spending big in an effort to ensure timely holiday deliveries
Will Google ever lose its throne as king of search? Here are its main contenders
Amazon says it blocked billions of counterfeit products in 2020
Twitter finally enables tabbed option to toggle between home and latest tweets
Boeing gets permission for Starlink-like internet-from-space project
Robinhood reports data breach affecting 7 million customers
Twitter Spaces is now accessible to people without accounts
How to unsend an email in Gmail if you accidentally sent it
Twitter just fixed one of its most annoying problems
Twitter taps big retailer for launch of new livestream shopping feature
SpaceX apologizes to customers for Starlink shipping delays
This tech gear proved popular during Black Friday 2021