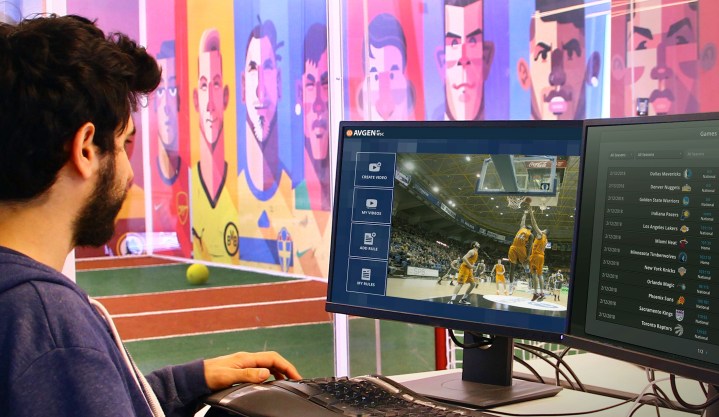 With sports starting to pick up again after the coronavirus-induced shutdown, you can expect pretty soon that certain social media feeds will once again be dominated by highlight reel clips depicting that day’s best dunks, touchdowns, home runs, and goals. Ever wonder how such moments find their way to social media within moments of taking place or, when it comes to game highlights, within minutes of the final whistle, bell, or buzzer? It turns out that you’ve got bots to thank, and an Israeli A.I. company called WSC Sports.

WSC builds algorithms for recognizing what goes on in sports games, identifying each and every play, and figuring out which are the most compelling moments. It can then help its sport organization clients, which range from the NBA to the NHL, to create automated short-form highlights and video clips without a single human editor needed. Last year, WSC generated a staggering 13 million sports clips. And it’s just getting started.

“We don’t use any [unique] hardware. The exact same broadcast that you see as a fan is sent into our cloud infrastructure,” Daniel Shichman, co-founder and CEO of WSC Sports, told Digital Trends. “Then there are two stages. The first one is that our platform analyzes the game in real time and identifies what happens in each and every second of the competition. That means every goal or every basket or every touchdown is automatically identified in terms of exactly when and where the event happened. Then we also define the perfect start and end time for every play.”

Breaking down the video

The way that Shichman describes it, WSC Sports’ technology sounds fairly simple. In the sense that LeBron James’ job is simply to throw a ball into a basketball hoop, it is. Of course, there’s a lot more complexity than just that. For starters, the first stage that Shichman describes is, in fact, three stages. Once a video stream arrives, it is analyzed on the level of video (what is happening on the screen), audio (how are the players and crowd reacting to what is happening on screen) and metadata (who is doing what, and how does this contribute to a broader story).

The Final Four would be set.@B1GMBBall had several teams capable of making a deep run, and we spotlight four of them below.

Which B1G team(s) would be headed to Atlanta? pic.twitter.com/eINiUoYmAH

Making an A.I. recognize a successful touchdown is comparatively easy. However, that’s just one small part of the overall puzzle. Are the three passes that lead up to the goal significant or not as part of a larger play? Where do you clip the commentary to avoid cutting off an important insight? In a sport like basketball, which might average 100 combined shots and free throws per game, how do you pick the most significant ones? Is it the average shot by the big-name athlete or the more spectacular dunk from a rookie player? Does a game-winning dunk matter more than one in the first quarter? Some of these answers might be obvious to a sports fan. But they’re not necessarily obvious to an A.I.

The system takes all of these complex inputs and ranks them in the same way that, say, Google’s search algorithms attempt to rank websites to tell us that one article is 0.01% more likely to answer our query than another. It’s a challenging process and, as Amos Bercovich, the senior algorithm developer at WSC Sports, told Digital Trends, “there’s no absolute truth” when it comes to some of the variables being weighed up. But it’s seemingly doing enough to impress the right people.

Speed is important in sports. It’s equally important in sharing sports content. Gone are the days in which those wanting highlights of the top games would have to wait until the evening news or tune into a weekly sports roundup. Here in 2020, content is shared instantly. A great goal by Cristiano Ronaldo or a brilliant, game-winning, serve from Serena Williams will be circulating on social media before the athlete in question has had the chance to hit the showers — and will frequently be seen by far greater numbers of people that way than by those who tuned in to watch the game live.

The question is who benefits from it in terms of sharing the media. “In today’s world, people are posting videos that they’ve filmed on their TVs,” Shichman said. “A lot of pirated content is out there. If you’re not quick enough to publish content, it won’t be first to market and fans will find ways to consume it.”

Of all the highlight grabs, and there were a lot of them, which ones were Felton Davis III&#39;s favorites?

As smart as the technology developed by Shichman and colleagues is, it would mean nothing if it couldn’t be done quickly. After all, sports highlights have been created for years by using teams of editors to manually select and clip them into packages. But using A.I. tools for the process means these can be assembled at speeds that simply wouldn’t be possible in any other way. A five-minute highlight package can be published, complete with graphics and processing time, in the space of just a few minutes. What’s more, it can be done in a range of formats to suit a range of audiences.

“I think the key is speed and scale,” Shichman said. “In today’s world, it doesn’t work anymore to create just one piece of content and push that [same piece of content to every platform] because every platform has a different audience. People on YouTube want to see something a bit longer. People on Instagram want something very short. And [people using a dedicated sports app] want to see something more professional or in-depth.”

It is this ability to deliver speed, efficiency, and flexibility that helped WSC Sports get its foot in the door with some of the world’s biggest sports organizations. As Shichman readily acknowledges, the company’s four co-founders didn’t have a whole lot of previous work experience before founding the company.

They met at university as engineering students, and bonded over a shared love of sport. With little more than a cool image recognition tech demo, they began reaching out to major sporting companies; figuring that they just needed one to take a chance so that they could prove their concept. The NBA was that organization, being on the lookout for ways to use new technologies to reach an increasingly connected audience.

The NBA’s response to the technology helped guide its development, Shichman explained. “We’d build things and get their feedback, and got into a quick feedback loop where, according to what they thought, we’d adapt. We assumed that if we [could do this] right for the NBA, they’ll be happy, and we can go and duplicate it for other entities as well.”

In the decade since then, WSC Sports has expanded its technology to more than 100 broadcast rights holders around the world, including the NBA, MLS, PGA Tour, NHL, and more. In total, it creates professional highlight clips for 17 different sports.

Think about the future

As to what the future holds, Shichman said the personalization revolution is only getting started. He paints a compelling picture of where that might be. A few years from now, “whether it’s five or 10,” Shichman thinks we could all have our own personalized sports highlights.

It might be that we pile into our autonomous cars, which know exactly how long we’ve got until we reach our destination. Alternatively, it may be a smart television that has access to our calendar and diary. Either way, a company like WSC Sports will be able to generate personalized sport highlights just for you — in the right format, of the right moments, and the correct length down to the split-second.

“People don’t just want to be shown the content, but also to be able to choose how they consume it,” he said. “We’re just growing all the time — and trying to understand where the world is going.”

Topics
This A.I. meme generator has mastered the art of oddball internet humor
Gmail tracks everything you purchase and you STILL can’t delete it or opt out
How A.I. can defeat malware that doesn’t even exist yet
A.I. predicts how you vote by looking at where you live on Google Street View
How to find archived emails in Gmail and return them to your inbox
How to sync your Outlook Calendar with your Google Calendar
How to block an email address in Gmail
How to easily log in to multiple Gmail accounts at once
How to change your Yahoo password
How to download Vimeo videos to your PC and phone
Kaspersky VPN should be your go-to for secure connections and privacy
Here are two awesome Santa trackers that kids can use today
Install these Chrome extensions on your relative’s new laptop