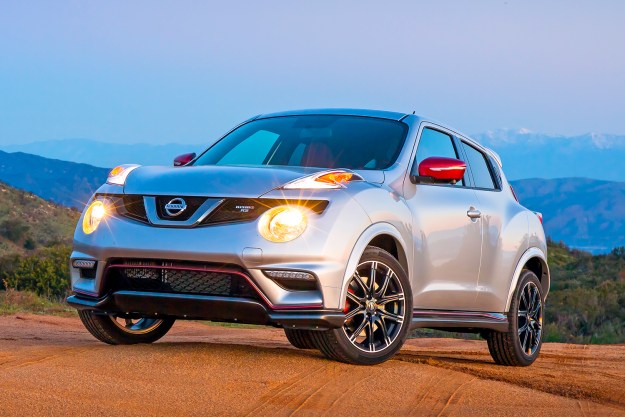 “The Juke NISMO RS is like a cult film, it's not for everyone, but it has a special place in our hearts for its outright weirdness and sense of fun.”

The Nissan Juke NISMO RS is one of those cars that are so strange they almost seem like a cry for help. After all, why else would a company cram 215 horsepower into a twee tall crossover, normally driven by college students and moms who wish they were college students? As it turns out, it is because it is a whole heck of a lot of fun.

Don’t confuse fun for outright speed, however. After all the NISMO RS looks like a techno frog, and while it may have a massive turbo and numerous spoilers and splitters, it did start life as a humble, slow Juke. 0 to 60 takes 6.7 seconds, nearly half a second more than the cheaper Ford Focus ST.

The numbers may be dissuasive, but the NISMO RS isn’t a case of style over substance. It is instead a case of specific priorities. The Juke NISMO has no pretense of being a serious, focused performance machine. Instead, thanks to a turbo apparently larger than the motor it is charging, the Juke is more like a ferocious kitten under the amphibian body package.

This interesting amalgamation means that, to enjoy the Juke you have to take a few special steps: Wind the tiny 1.6 liter engine up until the turbo is about to detach itself from the exhaust manifold, hammer the clutch like a rented mule (woe to anyone driving the automatic), and throw out everything you know about cornering and just throw the car through like you are auditioning for the next Tokyo Drift.

There will be tire noise, understeer and general drama, but do these things, and I guarantee the Juke NISMO will put a bigger smile on your face than any number of “faster” hot hatchbacks. That is because not only does the little Juke have big dramatic flair, it’s also well sorted in the right places. The suspension is well designed with a remarkably planted feel even in hard cornering. This comes as a pleasant surprise given the Juke’s ride height and torque steer. Speaking of steering, the Juke also does well in that category, at least once all those furious horsepower are done rampaging. The steering is just quick enough that it responds with a lively touch at speed, but not so fast that it becomes annoying on the highway. Together, the steering and suspension make the Juke RS a very responsive little beast. You just have to push hard to take advantage of them. In fact, once you get into the Juke NISMO you may never want to get out.

The Juke NISMO RS isn’t a case of style over substance. It is instead a case of specific priorities.

At first it will be because of how much fun you are having. But eventually, you will arrive where you are going, if you haven’t slogged it till the Juke ran empty. Then you will be faced with the difficult conundrum of getting out around the Recaro race seats. The side bolsters that hold you so nicely in the corners also mean you have to lift your legs while bending at the waist upon exit.

The only way for someone with my 6’2″ frame to get out of the car is curl into a fetal position on the seat and then throw myself out in a tangle of uncoordinated limbs reminiscent of a drunk orangutan, but then again if grace and subtlety  are strong priorities, the Juke NISMO RS probably isn’t for you.

Despite having a nearly fatally low level of dignity, the Juke manages to be a surprisingly – almost suspiciously – practical car. For starters, there is the price which is a fairly reasonable $28,000. Once ensconced in those race seats, the driver and front passenger can enjoy a high driving position with plenty of headroom. The rear seat is even big enough for actual adult humans… if the facade of your frog car hasn’t scared them away. All this, and there is still room for a couple of gym bags in the back.

There are some downsides though: the seats may be new to the Juke NISMO, but the rest of the interior is relatively unchanged. Trim that looks fine at the Juke’s $20,000 starting price looks a bit underwhelming when you are dropping nearly $8,000 more. The same goes for the somewhat small infotainment system. There is at least the comfort that, when you lay off the turbo and go for a long highway run, the Juke is capable of posting impressive 30-plus mpg numbers. That being said, when the small turbocharged engine is putting out anything near its max capacity mileage suffers majorly.

Meguiar’s G55032 Complete Car Care Kit ($54)
Keep everything from your rims to your leather looking show room fresh with this car care kit.

Cobra Electronics CDR 900 Premium Drive HD Dash Cam with Wi-Fi ($100)
Track your adventures and the world around you with this dash cam.

In the end, things like space, fuel economy, and even its comparative affordability are really just added bonuses. The real virtue of the Nissan Juke NISMO RS is that it is not only unique, but that it was designed with fun as the top priority. I never got tired of the Juke’s turbo pul or its mad styling. It will get thrashed by faster, more purpose built performance machines off the line or around twisty roads, but it is a much more distinct machine than most of its competition. Like a great cult movie, the little Juke NISMO RS may not be for everyone, but those who do love it will appreciate it all the more.