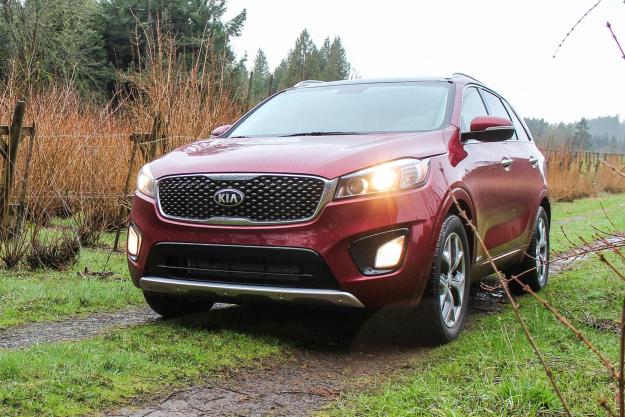 “The 2016 Kia Sorrento isn't just a good crossover; it incorporates some of the best qualities of family vehicles from the last 30 years … just maybe don't drive it off the road.”

Family cars have undergone a great deal of change over the past decades, from massive wagons, to minivans, to gas guzzling SUVs, and now to crossovers. Each generation of vehicle has had its strong points and weak points, but cars like 2016 Kia Sorrento are benefiting from that evolution to include some of the best of each breed.

The result is a family car that is spacious, well appointed, nice to drive, and even has some limited off-road ability. Of course the Sorrento also bears the Kia badge, so there is value, too. Though, given the Korean brand’s up-market trend, not as much of it as there once was.

The advantage of a station wagon has always been that they are, in essence, cars. That means they can easily be made fun to drive and even quite fast. Granted, not many of the wagons to reach American shores actually lived up to the potential, but the hope was there. The Sorrento may not be a wagon, but it does drive like one.

Unlike a lot of drive mode selectors, the one in the Sorrento makes a noticeable difference.

My press demonstrator boasted the range topping 3.3-liter V6. This peppy powerplant puts out 290 horsepower and 252 pound-feet of torque. Mated to a six-speed automatic, this engine feels both smooth and capable if not overly thrilling, at least until switched into sport.

Unlike a lot of drive mode selectors, the one in the Sorrento makes a noticeable difference. Shift points are tightened up, and, at least to my foot, it also felt like throttle response was ratcheted up. The result is a crossover that temporarily made me forget I had five seats and about 4,100 pounds of family car behind me.

With a 0-to-60 time in the 6.8-7.5 second ballpark (no official times are available) it isn’t exactly blistering, but the throttle responds briskly, and the V6 produces a truly nice growl. It will even tow 5,000 pounds.

Dynamically, the Sorrento is more planted than nimble, but it is very well executed. The body and suspension feel firm and fairly communicative, on par with offerings from VW. The steering was also a pleasant surprise: precise if a bit light, and with great on-center feel.

Driving the Sorrento won’t be too thrilling, but it is certainly no super squish-monster (hat-tip to Nick Jaynes). It is also decidedly a step above more sedate competitors like the Toyota Highlander.

The deep dark secret of the automotive industry is that there is no more space efficient vehicle than a minivan. Unfortunately, current car buyers view minivans with the same enthusiasm as walking in on their parents’ intimacy times. This means that automakers have to compromise, hiding a van-like profile beneath careful styling.

Despite the minivan like interior, the Sorrento’s exterior style has some distinct SUV cues.

In this way, Kia did a masterful job on the Sorrento. The interior is as spacious as anything in the segment. First and second row passengers have more than ample space, though headroom diminishes the further back you go. The third row seats are not enormous, but can fit children, and are about on par with other crossovers in the segment.

My only quibble with the Sorrento’s interior from a practical standpoint is that the controls to raise and lower the second-row seat are somewhat awkward. To raise the seats, I had to hold the lever, located at in the cargo area, and reach forward to grab the seat — a difficult stretch.

The rest of the interior is almost unassailable. The materials are all soft touch, and very well installed. The design is typical of most new Kias, which is to say: handsome if a little futuristic. It also features the latest in Kia tech, centered on Kia’s Uvo infotainment system. This has some problems, including an odd bug where all of the in-car audio cut out when I tried to use Siri, but it is still above average.

As far as style goes, the interior’s only unforced error is color scheme. My press demonstrator came with a grayscale interior heavy on black and gray with a few white highlights. In theory this seems fresh and clean, but in practice it is just dour and bit rental car. Fortunately, this problem is easily solved: just pick a different interior color.

Highland Universal Pet Barrier ($31)
Keep Fido, and his muddy paws off of the seats without having to resort to the Romney solution.

Michelin Latitude X-Ice Winter Tires ($292)
Give the Sorrento’s AWD system a hand with specialized winter tires and hit the slopes.

Despite the minivan like interior, the Sorrento’s exterior style has some distinct SUV cues. The big, 19-inch wheels, and 7.3 inches of ground clearance give the Sorrento a muscular stance. Kia has also worked hard on the front-end to give it a bit more length and definition. The result is a good compromise between giving it a long, truck-like hood, and keeping the size down.

One optional extra does a lot for the car’s appearance: LED fog lights. Available only the high-end, limited trims, this arrangement of two sets of quad LEDs not only looks a lot better than the standard fog lights, it also gives it a distinctly luxury feel.

When I was first writing this review, I was all ready to say that the Sorrento had some real SUV type all weather credentials. That all changes when I went out to photograph the car.

I pulled off a rural road onto some grass to grab a photo and discovered that the Sorrento was flummoxed. Granted the grass was slicker and muddier than I thought, but, even with the Kia’s center differential “locked,” the Sorrento was very unhappy. I am not about to say that this means that the Kia’s AWD is bad; only that, based on my experience, it is best suited to pavement.

Even despite my brief hiccup in my confidence in the Sorrento, I came away from the week impressed by it. The Kia may not be quite as refined or as well laid out as certain of its competitors, for instance the Toyota Highlander. It is an excellent car, though, and at just $40,995 for my well equipped V6 SX AWD, a good value.

The big Kia also shows off a new feather in the Korean automaker’s quiver: excellent dynamics. The Sorrento is not a car that will grate on drivers or tire them, instead it should consistently bring them happiness and even a little excitement from time to time. All I can ask from and more in a family mover.