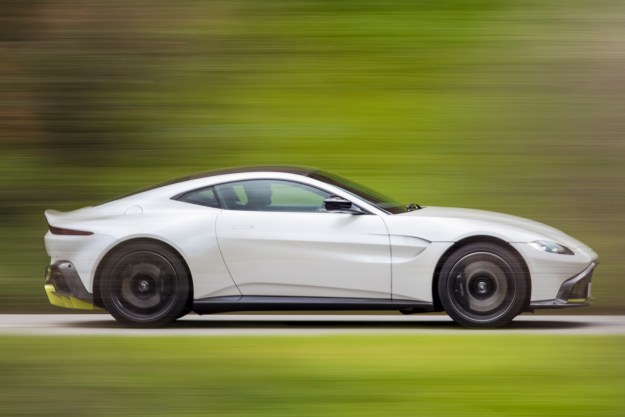 “The 2019 Aston Martin Vantage is the exciting luxury sports car that cures us of our Porsche fatigue.”

Aston Martin has a reputation for elegance, and it’s well-earned. Historically, its been known to produce some of the most coveted luxury grand tourers (GTs) around, even managing to upstage James Bond himself with the iconic DB 5 in Goldfinger. But like the casting of Daniel Craig as the double-0 agent more than a decade ago, Aston Martin is mixing up its well-known formula with the new 2019 Aston Martin Vantage, a sports car that lets its British brutishness bulge through its finely tailored exterior.

We’re not using “tailored” lightly, either. The new Vantage isn’t a GT like its sister car, the DB11, and thus isn’t beholden to the same level of restraint. It’s a sports car that’s meant to be played with, and while it still retains Aston’s standard of elegance, it’s allowed the extra flourish of functioning aerodynamic components.

As an entry-level car for the luxury brand, the Vantage is slated to cost $149,995, which puts it in the crosshairs of two-seater sports cars like the Audi R8 V10, McLaren 570S and — more critically — the Porsche 911 Turbo. There’s one available configuration of the Vantage, but the car can be tailored by way of optional packages to those who seek a bit more comfort, sport or technology. These extras will determine if your Vantage runs bare-bones, with aggressively colored exterior highlights, or laden with conveniences like 16-way heated seats, parking sensors, and a center touchpad.

The interior of the Aston Martin Vantage is simplistic, but not spartan. The two-seater cabin has little in the way of flourish and everything in it is purposeful. Each detail is thoughtfully implemented and performance focused: Alcantara dominates the interior surfaces because it keeps occupants from sliding better than leather does.

Tiny pads are mounted on either side of the center column to keep driver and passenger knees from getting banged up as they brace through turns. Buttons to change driving modes and suspension stiffness are located on the steering wheel, requiring barely a glance to activate.

The center console dominates the interior and is tightly packed, much like the interior layout of the current Chevrolet Camaro. Unlike the Chevy, however, there is no drive select shifter but rather buttons flanking the ignition. These are nestled between the HVAC controls and the click-wheel interface for the dash-mounted 8.0-inch LCD screen. Navigation and audio entertainment systems are located here, as one would expect, and it’s also where drivers can pair their phones for audio streaming or hands-free calls.

Right from the start, the Vantage communicates that it means business.

From the driver’s seat, it’s clear that ergonomics received as much attention as the cabin’s layout. Large column-mounted paddle shifters — Aston Martin signature details — sit behind the chunky steering wheel, which is fixed and easily accessible when in the thick of enthusiastic motoring.

The seats can be pushed back incredibly deep, giving the Vantage something most sports cars rarely afford the taller-than-average driver — extra space. It may not have a couple just-in-case rear seats like the 911, but such flourishes aren’t missed.

Stowage areas behind either seat are there to accommodate the odd shoulder bag, which is how owners use the 911’s cramped rear seats, anyways  For anything else, there’s a surprisingly capacious 350-liter (12.3 cubic foot) trunk that’ll fit all you’d need for a day trip.

Right from the start, the Vantage communicates that it means business. Aston has dropped its traditional grille to save weight, and in its place is a gaping matte black maw that delivers air to the engine and cools the brakes while the front splitter applies downforce. Air continues to flow down the flattened underbelly, channeled by vents and sucked out the tremendously aggressive rear diffuser. All this works to hunker the car down on the road surface and increase stability during high-speed maneuvers.

Beneath the hood is a Mercedes-AMG-sourced 4.0-liter twin-turbo V8 that whips up 503 horsepower and, critically, 505 pound-feet of torque. Coming in between 2,000 to 5,000 rpms, there always seems to be ample torque at the driver’s disposal. All this power is focused through an eight-speed automatic transmission supplied by ZF. The same gearbox can be found in the Aston Martin DB1,  Alfa Romeo Giulia Quadrifoglio, and BMW 5 Series. These cars are all built for punishment, and each brand chose ZF for its proven durability in performance applications.

Out of the gate, the burble of the quad exhaust pipes becomes a roar with a firm press of the throttle. Aston Martin claims all that torque can send the Vantage from 0 to 60 mph in 3.6 seconds (and we are inclined to believe them). The Vantage more than surges from the pit lane of the Algarve International Circuit in Portimão, Portugal — it deploys like a fighter jet from an aircraft carrier.

Quick to offer up its immense power, the Vantage feels sturdy yet incredibly light. At 3,744 pounds, the Vantage is heavier than the 911 Turbo (3,671 pounds) and the Audi R8 V10 (3,615 pounds), but you’d be forgiven if you presumed it was slighter than its rivals based on its tractability.

The Vantage is very well-balanced; it communicates every nuance to the driver via road feel and sensation of speed.

Like the R8, the Vantage feels tight and manageable, but none of the inputs are dulled. Rather, the car is so well-balanced, it communicates every nuance to the driver via road feel and sensation of speed. Enter a corner too hot, and you’ll feel precisely how much grip remains. At a time when more high-output vehicles distill communication and use driving nannies to simply “fix” improper car control, the Vantage is not one to afford false confidence.

The electronic rear differential on the Vantage is an Aston first, and it’s linked to the car’s electronic stability control system. The mechanism reacts in milliseconds to enhance composure at high speeds and through corners, but it’s not there to babysit. During our first few sessions on a damp track, the Vantage is eager to fan its tail while rapidly delivering reports through our seat and hands. Algarve is not a track to misjudge, and the surfaces only compound the natural challenge of its elevation change and blind corners.

We start in “sport,” the first of three drive settings that include “sport plus” and “track”. These, along with three levels of damper stiffness, can be adjusted on the fly thanks to wheel-mounted toggles. The Vantage never feels skittish, and even in sport, the car delivers heaps of physical data. Still, we note the vehicle’s restraint. A quick flick of the drive mode unleashes everything the Vantage has to offer.

Instantly, the dynamics change. While sport afforded good control and plenty of power, the “plus” and “track” settings deliver superior throttle response. Now, with the car feeling out the track as if with whiskers, our laps improve (and our smile widens) substantially. Indeed, the car’s feedback and performance give us the confidence to push our own limits on Algarve’s heart-thumping course. On the front straight, we climb through the revs before stomping on the optional carbon ceramic brakes ahead of the first corner. We don’t get anywhere close to the Vantage’s 195 mph top speed, but no one wants to see a $200,000 write-off.

Off the racetrack, the Vantage is equally thrilling – albeit for different reasons: The noise and magnetic style make every drive special; it’s an Aston, after all.

If given the chance to build our own Vantage, we’d start with a slightly more modest exterior color than the Lime Essence Green test car. Showy paint jobs are fun for a few days, but we’d prefer a debonair Frost White for a daily driver.

Though not available at launch, the optional quad exhaust ports are a must-have as well. Inside, we’d equip our ideal Vantage with the tech package (auto park assist, blind-spot monitoring, and keyless entry), plus 16-way adjustable seats with heating and ventilation.

Aston Martin has made it clear that the Porsche 911 Turbo sets the benchmark for the Vantage, and though those are some mighty Pirellis to fill, the Vantage is fit for the task. In a straight line, the all-wheel drive 911 Turbo will leave the Vantage for dead, but we know which car we’d prefer for a lap around a racetrack or a night out. Driving pleasure is about more than the numbers, which is something Aston Martin clearly understands. The Vantage is sexy, raucous, and unique – all things the 911 is not.

When the all-new Vantage arrives this summer, we expect to see a good number of high-earners cruising past the German luxury car dealers on their way to an Aston showroom.