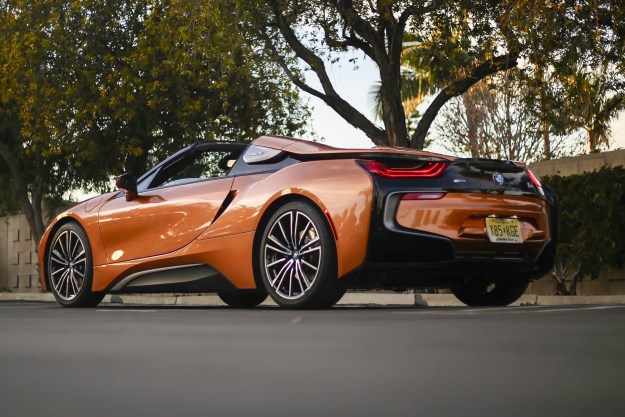 “The i8 Roadster’s efficiency and style don’t quite make up for its lofty price and modest specs.”

From the moment we saw the BMW i8 Spyder Concept in 2012, we knew it would become one of the most striking vehicles to ever wear a license plate. We awaited the production car’s debut with great anticipation, but following the coupe’s introduction in 2014, we soon ran out of breath. We felt teased by the delay. Sure, the i8 Coupe was radical, but that Spyder Concept had promised even greater curb appeal.

Finally, the road-worthy i8 Roadster found its spotlight towards the end of 2018. Indeed, the car was sharp, yet four years of the i8 Coupe had accustomed us to BMW’s bold design, and revolutions in electric powertrain development had diminished the appeal of the i8’s plug-in hybrid formula. The coin had lost its shine, but it could still hold value.

Though lacking the output of its similarly-priced rivals, the 2019 i8 Roadster attempts to win favor with its outlandish bodywork and unparalleled efficiency. An updated battery promises extended all-electric range and a small bump in total output. A power-folding fabric roof opens and closes in just a few seconds for spontaneous open-air experiences.

Our week-long test frames each of these selling points against a lofty $164,295 starting figure to see whether the i8 Roadster is still the car of our dreams.

Critics who sized up the production i8 Coupe years ago concluded the car’s wild exterior styling would age terribly. They were wrong.

Tera World Copper editions, like our tester, can be configured with burnt orange paint and include gloss black brake calipers. One peculiarity to the i8’s appearance is its partial-closing door windows. Neither coupe nor convertible versions allow passengers to completely lower the glass, making it awkward to rest an arm on the doorsill.

Inside, BMW attempts to keep the exterior’s futuristic look flowing with blue ambient lighting, a thin white border on the steering wheel, and a curved dash, but it’s near impossible to overlook the classic German cabin layout. The center stack is particularly puzzling, with an ordinary arrangement of buttons and a tall gear selector pulled straight from a 2 Series. Material quality matches the brand’s other products, heated, leather-wrapped seats are handsome and comfortable, and dihedral doors are unquestionably cool, but we long for something more luxurious or tantalizing from the automaker’s aspirational model.

One would expect to find suitably futuristic technology, but the i8’s convenience and safety features are merely contemporary.

By far the most frustrating aspect of the i8’s interior is the struggle to access it. A high, deep sill and protruding A-pillar force driver and passenger to contort their bodies to plop into the cabin. Even with the roof stowed, entry and exit is a challenge. Comparatively, other low-slung supercars like the Audi R8 and McLaren 570S provide large cutouts to place a foot in the cabin and stabilize entry. Storage space is truly tight as well, with a small cubby (4.7 cubic feet) within the i8 Roadster’s rear hatch and a rectangular hold (3.5 cu. ft.) where the i8 Coupe’s rear seats typically reside. If it’s practicality you’re after, few high-end sports cars do it better than the McLaren 570GT. You’ll pay more for it than for the i8, though.

One would expect to find suitably futuristic technology within such a forward-looking design, yet the i8’s convenience and safety features are merely contemporary. The rosier side of that, however, is that everything is easy to operate and quick to access.

Protruding from the top of the dashboard is an 8.8-inch touchscreen display running BMW’s iDrive software. The tiled layout compartmentalizes key entertainment, navigation, and telemetry information. Opening one of these tiles reveals more settings and details; a split-screen mode allows the user to quick-select settings on part of the screen. A few shortcut buttons accompany a touch-sensitive controller mounted on the center console. Display resolution is excellent and the system responds to inputs immediately.

Apple CarPlay is included as standard, but after the first 12 months, the smartphone integration tool becomes subscription-based at $80 per year. Not only do sub-$30K cars include this resource for free, but the fact that BMW’s halo model doesn’t come with CarPlay for the life of the vehicle is truly disappointing. Android Auto, meanwhile, isn’t available at all. Other missteps include a single USB port hidden within a small console cubby, no Wi-Fi hotspot, and no wireless phone charging.

The i8’s 27-combined mpg means we barely drained half of the 11-gallon tank after a week’s worth of mixed driving.

People shop the high performance vehicle segment for more than the terror of taking a highway onramp a bit too quick. Some desire the look and feel of a sports car with the road manners of a luxury commuter. And while potent coupes are easier to drive today than ever before, few are as accessible as the BMW i8.

Rather than wielding a raucous eight-, 10-, or 12-cylinder engine, the i8 Roadster uses just three cylinders of forced induction fury to motivate its rear wheels. The remainder of the car’s power comes from an 11.6-kWh battery pack and two electric motors turning the front wheels. Combined, the i8 serves up 369 horsepower and 420 pound-feet of torque through a six-speed automatic gearbox (the electric motors run through a two-speed unit). The 12-hp bump in output compared to the old i8 doesn’t affect the car’s 4.4-second sprint to 60 mph or 155-mph top speed.

Four drive modes manipulate the i8 Roadster’s performance and efficiency. By default, comfort mode taps both electric and gas powertrains to smoothly propel the vehicle without great urgency. Those hoping to maximize their fuel economy can select Eco Pro, which slackens throttle response, turns off air conditioning, and sends the car into its highest gear as quickly as possible. Sport mode has the opposite effect, calling to task every bit of power the i8 can muster, holding gears, and recharging the lithium-ion battery.

Unlike even the hybridized NSX, the plug-in i8 also has a pure electric range. With three more miles than the outgoing model, the 2019 i8 Roadster offers 18 total miles of e-travel before the gas engine kicks in. Unlike some hybrids, the i8 will also run at considerable speeds (up to 75 mph) on electric power. Our experience behind the wheel made it clear those 18 miles disappear quickly, however – even in comfort mode. Still, the i8’s 27-combined mpg means we barely drained half of the 11-gallon tank after a week’s worth of mixed driving. That’s on par with a family-friendly crossover, and considerably better than any sports car in the i8’s price bracket.

As the only two-door, two-seater sports car with a plug-in hybrid powertrain, the i8 is certainly unique.

Scooting around town and coasting along highways, the i8 is effortless to drive. The suspension is well damped, the steering is direct, and the powertrains change hands seamlessly. Sport mode is entertaining as well, with the electric motor providing off-the-line thrust and the gas engine building speeds from there. In corners, the i8’s rigid carbon fiber chassis keeps the car flat and stable, though road feel through the steering wheel is minimal. By no means can the i8’s driving experience be compared to a supercar, but it’s no snooze fest, either.

The i8’s one hiccup appears when drivers demand responsiveness from the car without giving it plenty of warning. When driving in comfort mode at low speeds, the sudden need for more power startles the i8, clunking the cabin as the gas engine engages.

As the only two-door, two-seater sports car with a plug-in hybrid powertrain, the i8 is certainly unique. Alas, the coupe’s $148,000 and roadster’s $163,000 starting figures put the two in competition with some serious performance vehicles.

If the i8’s blend of efficiency and performance is of primary appeal, you may also shop Acura’s new NSX. Priced at $159,300, the hybridized NSX sends 573 hp to all four wheels and can hit 60 mph in only 3.2 seconds. Though it lacks an all-electric range, the NSX manages an impressive 21 mpg combined.

Configuring our own i8 Roadster is a relatively simple task, owed to a restricted selection of options and packages. We’d pass on both the Tera World and Tera World Copper packs, instead choosing a base Roadster painted sophisto grey metallic with frozen blue accents. To finish off our build, we’d coat the 20-inch wheels black and select giga ivory white leather. As equipped, our i8 would cost $164,295 (including destination).

Telling a nerd they’ll one day grow up to hire (or fire) the kind of people that bully them is a nice sentiment, but it doesn’t make the daily beatings any less painful. Such is the case with the 2019 BMW i8: that smart hybrid powertrain knows how to save fuel and outrun some of the lazier sports cars, but it can’t stop supercar rivals from issuing performance poundings.

The 2019 i8 Roadster is not a lost cause, though. With its dramatic styling, comfortable cabin, quick-folding roof, and ultra-efficient drivetrain, the i8 Roadster will readily cozy up to aesthete buyers. The niche is small, but defined.

If form and efficiency matter more than power and practicality, the 2019 i8 Roadster is a good buy. Otherwise, there are better alternatives.