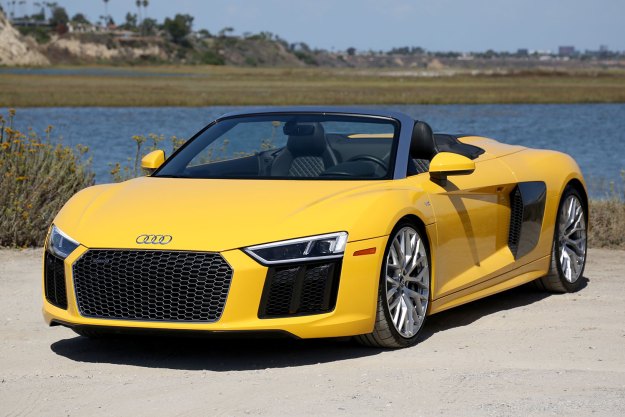 The Digital Trends staff has an unabashed obsession with the Audi R8. From our first drive, to our on-track experience, to our review, to our Car of the Year awards, every bit of seat time in the German automaker’s halo model has left us stammering praise to anyone who will listen. You could say we had a good feeling heading into this appraisal of the topless version, but because nothing can be taken for granted, we (sacrificially) strapped into the mid-engine supercar for another round. So, without further ado, read on for our 2018 Audi R8 Spyder V10 review.

Audi’s second generation R8 debuted in 2016 with evolutionary styling tweaks, more power, improved interior technology, and an all-new platform. The R8 Spyder V10 shares an engine, platform, and bodywork with the V10 Coupe, but modifies the supercar’s silhouette with a folding soft top. As of this writing, only a base V10 Spyder is available, though a 610-horsepower version (to match the V10 Plus Coupe) is due early next year.

As a general rule, convertibles forfeit some of the aesthetic grace of their coupe counterparts. Something about the panel gaps of a folding hardtop or the bunched fabric of a ragtop just looks…off. In clear violation of this trend, however, is the Audi R8 Spyder.

While drop-top versions of most sports cars seem like afterthoughts (“just lob the top off here, Bill”), the R8 Spyder feels like a ground-up redesign of an already handsome car. In particular — whether its fabric roof is raised or stowed — the R8 Spyder showcases its carbon fiber-trimmed louvers, low profile, and elongated rear end. Why hide stylized bodywork beneath a folding roof, only revealing the best angles post-conversion? The R8 Spyder is fetching 24/7.

While drop-top versions of most sports cars seem like afterthoughts, the R8 Spyder feels like a ground-up redesign.

As a design progression from first to second generation, we most appreciate the R8 Spyder’s profile and rear views. The jury is still out on the updated supercar’s ultra-sharp nose, but those striking LED headlights are universally bad-ass. Our Vegas Yellow tester (which fluctuates between a Pantone and Mustard tinge based on lighting) draws plenty of attention, yet is still more conservative than its Lamborghini Huracan Spyder cousin.

Supercars tend to be ‘super’ from the outside in, meaning their exterior design and vehicle mechanics steer the conversation. While the R8 Spyder has definitive road presence and scintillating performance, much of its wow-factor can only be experienced from within the cockpit.

Interior technology takes center stage from the moment you trigger the R8’s blood red ignition button. Instead of a poorly integrated center monitor, an undersized TFT monitor, and analog gauges, Audi consolidates all information within one 12.3-inch digital display – positioned directly in front of the driver.

Audi’s ‘Virtual Cockpit’ is equal parts sophisticated and intuitive, with a reconfigurable interface to increase or decrease the prominence of Google Earth maps/navigation, performance data, media, music, and telemetry data. So impressive is the driver module that we don’t even miss Apple CarPlay or Android Auto functionality.

Complementing the R8 Spyder’s visual intrigue is a killer audio system. 13 speakers and 550 watts of Bang & Olufsen goodness transform the R8 Spyder into a concert venue — for you and surrounding traffic. A pair of USB ports, dual SD card slots, a single aux jack, Bluetooth audio, HD Radio, and Sirius XM provide ample charging and music playing options. Then again, with an on-demand V10 soundtrack, you may forget about alternative audio entirely.

Beyond its cutting-edge gadgetry, the R8 Spyder’s cabin is a visually stimulating, supremely comfortable room for two. Interior design flows from the driver’s compartment, following a downward sloping panel on the dashboard into a wraparound layout. Each detail is oriented towards the pilot, including the air vents, climate control nubs, and center stack.

The R8 Spyder champions a more livable side of supercar ownership.

This affords the driver a sense of complete command, emphasized by his or her ability to control nearly every convenience and performance adjustment without lifting a hand from the flat-bottomed steering wheel.

A supercar is, after all, a selfish indulgence; why not choose one with interior and exterior spoils?

The 2018 Audi R8 Spyder will not try to kill you. If your criterion for a supercar purchase includes regular near-death driving experiences, may we suggest the Dodge Viper or equivalent lunacy. Certainly, the world has need for “bite the hand that feeds” performance machines, but the R8 champions a more livable side of supercar ownership.

Ride quality is that of a luxury car first and a performance vehicle second, front and rear overhangs don’t scrape on anything with an incline, the seven-speed dual-clutch transmission is smooth as silk in automatic mode. These refinements culminate in a perfectly reasonable daily driver. Sure, not everything is family-sedan practical. Like any other mid-engine supercar, the front trunk or “frunk,” if you will, is scarcely large enough for a small suitcase, and extra long doors mean an awkward exit in a crowded parking lot. So, you know, maybe buy a second car to haul stuff?

In the wild west of public roadways, the R8 is best suited for your lead-foot shenanigans.

“Livable,” you scoff. “Another way of saying ‘boring,’ you mean!” Only if you consider motor sports boring when no one crashes. As much as the R8 Spyder is designed to accommodate, its marching orders are to thrill. Directly behind the cockpit, a 5.2-liter naturally aspirated V10 engine converts combustion into eye-watering acceleration and ear-phoric sound (we ran out of real words to describe it). Numbers: 540 horsepower and 398 pound-feet of torque; 0 to 60 mph in 3.6 seconds, 198 mph top speed; 8,500 rpm redline; 17 combined mpg.

Unlocking the engine’s music box is as simple as hammering the throttle, but accessing the R8’s performance potential takes a couple more steps. Audi’s drive select system tunes steering weight, throttle response, and suspension damping according to three pre-set drive modes and one custom selection. Additionally, the seven-speed dual clutch gearbox features standard drive mode, sport mode (faster shifts, longer gear holds), and full manual mode. Shifting on your own is possible via the gear selector itself or via the steering wheel-mounted paddles.

Audi’s Quattro all-wheel drive system is a marvel. Even with traction control in less restrictive “Sport” mode, the car’s unflinching grip and stability creates boundless confidence. Amplifying the assurance and engagement is a hyper-responsive steering system and muscular braking. Other may have higher cornering limits, but only a professional driver on a racing circuit would be qualified to achieve them. In the wild west of public roadways, the R8 is best suited for your lead-foot shenanigans.

The R8 Spyder will have you grooving to its performance beat, but the real jam-fest starts the moment you drop that top.

The 2018 Audi R8 V10 Spyder comes standard with a driver single-stage and front passenger dual-stage airbags, side airbags, driver and front passenger knee airbags, ABS, stability control, a backup camera, parking sensors, and adaptive cruise control. Audi does not offer addition driver aids for the R8 lineup. Like most , the R8 has not been crash tested by the IIHS or NHTSA.

Thanks to a generous list of standard features, we would keep our 2018 Audi R8 V10 Spyder build fairly simple. While cool, carbon fiber trim does little to impact the vehicle’s weight, thus we’d forgo those exterior or interior packages. Standard silver painted exterior accents balance our preferred Vegas Yellow paint job nicely. Our sole exterior option would be the stunning 20-inch Y-design forged alloy wheels ($1,500). Inside, we’d add on the diamond-stitched leather package ($3,500). Including these extras, our perfect R8 Spyder would set us back $182,600 plus destination and handling.

We’ve often wondered, if there wasn’t a dedicated group of convertible consumers, would automakers even go through the effort of designing, engineering, and producing another model variant? Considering coupes are often better looking, more practical, and more affordable — perhaps not. If not for the 2018 Audi R8 Spyder, we might tolerate a fixed roof mandate, but a world without this dashing drop-top is a world we never want to see. As it turns out, taking the lid off perfection only lets us admire it more completely.

The 2018 Audi R8 Spyder competes most directly with the McLaren 570S Spider and Porsche 911 Turbo Cabriolet. Among these, the McLaren is the most powerful, the Porsche is the quickest to 60 mph, and the R8 Spyder is (in our eyes), the most fetching. Buyers who want a raw performance experience, sans roof, will prefer the $208K McLaren, and those who want to veil their car’s potency in a regular ol’ sports car body will choose the Porsche. Everyone else will find more than enough visual and sensory delight in the R8 Spyder.

2018 is the first model year for the second generation Audi R8 Spyder, so don’t expect any significant changes for quite some time.

Can you afford it? If the answer is, “yes,” and you are in the market for a convertible supercar, the 2018 Audi R8 Spyder is absolutely the one to have.