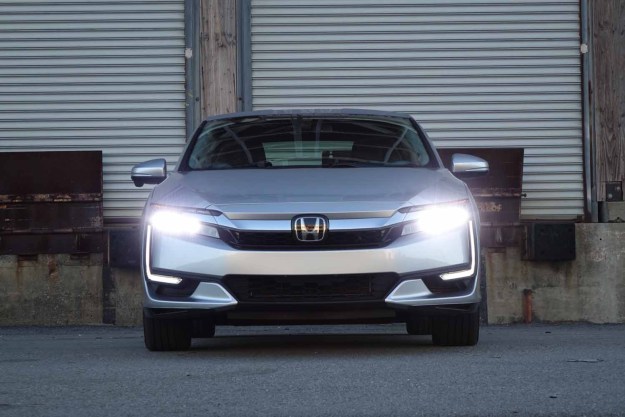 “The Honda Clarity only works for commuters who rarely need to use its gasoline engine.”

If the Honda Accord is the Swiss Army Knife of mid-size sedans, the bulky Honda Clarity is akin to one of the pocket-busting Victorinox Swiss Champ models that seem to have a tool for every function. There’s plenty that those knives can do, and plenty you’ll have to consult the owner’s manual to learn about.

With the Clarity, Honda has a one-size-fits-all package. Its bulbous body — admittedly not a selling point — is designed to house one of three advanced powertrains. We spent a week commuting in a Clarity in San Francisco’s grueling traffic to find out if it lives up to its promise of doing it all, and where it stands in the hybrid pecking order.

To the casual observer, only badges set apart the plug-in hybrid Clarity with its commuter-friendly 48-mile electric range from the fully electric Clarity variant that can run a modest 89 miles between charges, and from the futuristic hydrogen fuel cell version that will only appeal to a small slice of California drivers who live in the vicinity of a fueling station.

We commuted from Oakland to San Francisco in the most popular version — the plug-in hybrid — and found it to be an acceptably comfortable, spacious, and refined cruiser. Its 48-mile electric range rating proved realistic, but the hefty car ran out of energy — literally — when pushed into action for those rare high-speed jaunts occasionally afforded on Bay Area roads. At around 4,000 pounds, the Clarity is a lot for its 212-horsepower, 1.5-liter four-cylinder engine to lug around, and dipping the accelerator pedal toward the floor means using either more electricity or more gasoline. The engine proved more than up to the task, but we saw just 40 mpg in standard hybrid mode. That’s not terribly good.

The plump curb weight gives the Clarity a comfortable ride.

The plug-in version of the Clarity drives using battery power until depleted, at which time it operates like a conventional hybrid that uses the gas engine as a generator. Drive modes including Normal, Sport, and Eco include a mode that allows drivers to hold onto battery charge for later use, such as for lower-stress urban driving that may occur toward the end of a longer commute.

The plump curb weight gives the Clarity a comfortable ride. The soft suspension and light steering do it few favors on a winding road, though that’s not really what this fuel miser is about. It cruises serenely and quietly, at least until its gas engine is awoken for highway passing. Combined with a continuously variable transmission (CVT) that wants to force the engine into higher — and thus louder — engine speeds for passing, the droning is tough for the audio system to overcome.

Factoring in the 48-mile electric range, the EPA rates the 2019 Clarity Plug-In at 110 mpg-e, a measurement that estimates the efficiency of the vehicle. Less impressive is its 42 mpg combined rating once the battery is depleted. Again, the Honda Accord Hybrid’s 48 mpg combined makes the Clarity a tough sell. Shoppers may also want to look at the Toyota Prius Prime and the Hyundai Ioniq, both of which are cheaper than the $37,530 Clarity Plug-In Touring we tested but not nearly as well equipped.

Good on comfort, so-so on tech

Those engine rumbles are at odds with what is otherwise a surprisingly nice interior. Where other eco-friendly cars — we’re looking at you, Nissan Leaf and Chevrolet Bolt — skimp out on interior comfort and features in the pursuit of frugality, the Clarity is almost luxury car-like in its confines. Our Touring level tester came with leather and suede-like upholstery, a power driver’s seat, an 8.0-inch touchscreen with Apple CarPlay and Android Auto compatibility, and a built-in navigation system that can display the location of charging stations.

The touchscreen is standard Honda fare from a couple of years ago, meaning there’s no volume knob like the automaker’s more recent systems. That’s a big surprise since the Clarity’s basic design dates back to a late-2017 model-year introduction. The built-in software can prove more menu-intensive than some drivers might like to use, especially while on the go, and the interface is more functional than pretty.

The touchscreen is standard Honda fare from a couple of years ago, so there’s no volume knob.

The seats are comfortable and outward visibility is decent thanks in part to an extra rear window tacked onto the tailgate. Cargo space at 15.5 cubic feet is about average for a mid-size sedan and not very good for a hatchback.

At $37,530, our test car is a decent value, though Honda’s own Accord hybrid strikes a sweeter spot for those who aren’t insistent on a tailpipe emissions-free commute. If you’re sold on a Clarity, the base version costs $34,330 and comes with everything we’d consider essential — active safety tech, cloth seats, and an 8.0-inch touchscreen without navigation.

For now, the Clarity only has one direct rival, and even it is a different kind of hybrid. The Toyota Prius Prime offers about 25 miles of electric-only range, which is offset at least in part by a 54 mpg combined rating from the EPA, and a list price that’s about $5,000 less than an equivalent Clarity. You may not have to leave the Honda showroom, however. The Honda Accord Hybrid costs about $26,300 and is sized about like the Clarity, while the smaller Insight takes up less space and runs about $4,000 less. Both are great options for buyers seeking a blend of Honda dependability, and hybrid efficiency.

Still not sure what to buy? Check out our favorite hybrid cars.

Honda backs the Clarity with a three-year, 36,000-mile warranty, and the powertrain is covered by a five-year, 60,000-mile plan. Every Clarity regardless of trim level comes standard with front, side, and curtain airbag in addition to a knee airbag for the driver, plus driving aids like lane departure warning, forward collision warning, lane-keeping assist, and adaptive cruise control. It offers a comprehensive suite of safety features, but its rivals do, too.

Like those bulky Swiss Army Knives, the Clarity Plug-In is intended to appeal to a small subset of drivers. If your commute is less than 50 miles, you’ve got enough room to park the nearly 193-inch-long sedan, and cargo space isn’t essential, it’s not a bad choice.

No. Honda’s Accord and Insight hybrids are ultimately better values for most buyers.