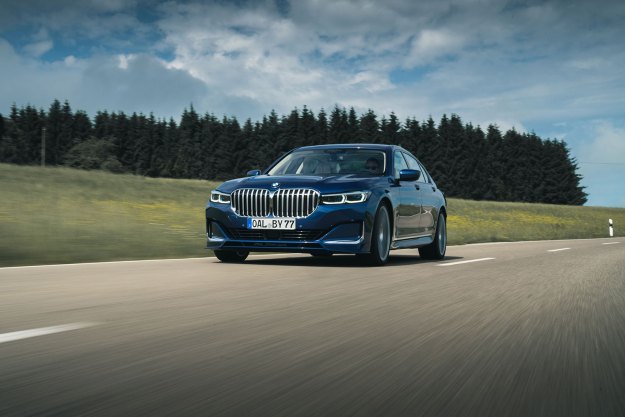 Aftermarket tuners, like cover bands, are hit or miss.

Some put an original and unexpected spin on something you’re familiar with, while others define the phrase “less than the sum of its parts.” Alpina falls into the first category by re-interpreting BMW’s greatest hits with more distortion. The B7, its flagship model, is not merely a 7 Series with a body kit and fancy-looking wheels. It’s not a substitute for the non-existent M7, either. Outwardly, it’s an unclassified species of super-sedan that wraps performance, comfort, technology, and exclusivity into one. I can’t think of a better place to get acquainted with it than the Bavarian roads it was developed on, so that’s the region I set out to explore after picking up a blue 2020 B7 – one of the first to roll off the assembly line – in front of the company’s headquarters in a picturesque German town named Buchloe.

Sitting in the B7 feels a lot like sitting in the normal 7 Series, and the two sedans are built on the same assembly line in Dingolfing, Germany. Alpina’s range-topper recently received the same round of updates inside and out as BMW’s. Yes, that means the massive grille that’s bigger than the steering wheel in some of the econoboxes I’ve driven carries over. It’s there, whether you love it or hate it. More importantly, the tech updates made to the big Bimmer turn the B7 into a smarter, more user-friendly sedan.

Seeing a rotary dial a car’s center console sends shivers down my spine. Poking and prodding the thing to navigate the infotainment system often feels as natural as using a schnitzel to drive a nail into wood. The B7’s infotainment system – which is displayed on a 10.2-inch screen planted on top of the dashboard – responds to a number of other stimuli, including voice commands, touch commands, and gesture controls. I prefer poking the screen to jump from menu to menu. The icons are clearly labeled, and the software responds to input quickly, so it’s easy not to get lost in it.

There’s another screen in the B7, and it’s right behind the steering wheel. This one is Alpina-specific. Sure, the 7 Series also offers a digital instrument cluster, but the Alpina’s has blue and green graphics, different fonts, and its speedometer goes up to 340 kilometers per hour. That’s 211 miles per hour, which is faster than you can expect to travel on Japan’s Shinkansen bullet train. An Alpina spokesperson quickly notes the top speed is “only” 205 mph, which is still a little bit faster than the train.

On asphalt or on rails?

Cruising at Shinkansen-like speeds on the German autobahn is possible, and it’s legal, but it’s considerably more difficult than it sounds. Heavy traffic, endless construction zones, and semi-trucks criss-crossing the country like giant turtles all make a concerted effort to prevent me from sending the twin-turbocharged, 4.4-liter V8 spinning into the stratosphere. I nonetheless manage to reach 170 mph, which makes the German countryside look like an abstract painting. My knuckles are about to burst through my skin as I clench my hands around the steering wheel, but the B7 is serene, stable, and quieter than some electric cars. It’s a calm force, and even in Germany it flies under everyone’s radar.

The next exit takes me into the Bavarian countryside, where tractors towing a wide variety of heavy machinery hop from field to field. Passing them is effortless in the B7. Shift buttons, not shift paddles, control the eight-speed automatic transmission. Pressing the one labeled minus summons the next gear down, mashing the gas pedal mobilizes the V8’s full 600-horsepower output, and a second later I see Dieter and his Fendt tractor in the rear-view mirror. With the road at its disposal, the B7 proves it carries itself well through corners in spite of its 4,800-pound curb weight. This is thanks in part to the suspension tweaks made by Alpina, which keeps body roll in check, and to the four-wheel steering system, which makes it nimbler than a 207-inch long limousine ought to be. The V8 serves 590 pound-feet of torque low in the rev range, which is enough to pull the B7 out of corners with ease.

The B7 takes a breather when traffic catches up with us. My knuckles retract back into my hands, and I use this opportunity to zoom out on the navigation system to check were I am. I also flick the drive mode selector into comfort to experience another side of the B7 as I merge back onto the highway. It doesn’t completely change character but it eases up, like a Wall Street trader loosening his tie after a long day. The suspension soaks up most bumps in the road, and the ride becomes softer without tilting too far towards boat-like. While I’d like to put smartphone connectivity to the test, Alpina – like BMW – doesn’t offer Android Auto. Apple CarPlay is available for iPhone-wielding motorists, however.

Even at triple-digit speeds, the B7 is serene, stable, and quieter than some electric cars.

Upstart Alpina doesn’t make its own electronic driving aids; it borrows them from BMW corporate. The suite of features includes adaptive cruise control, lane-keeping assist, and lane departure warning, among others. They come together to form an electronic co-pilot that makes driving in dense traffic less of a chore. Meanwhile, I take the time to examine the B7’s superb fit and finish. Alpina may be a well-kept secret in the United States, but it’s huge in Japan because motorists there appreciate the stunning level of detail that goes into every build. Even the steering wheel is re-skinned and re-stitched to be as smooth as possible. The finishing touch is a metal plaque on the center console that tells unsuspecting passengers they’re not riding in a run-of-the-mill 7 Series.

Exclusivity and attention to detail partly explain why you’ve likely never seen a B7 before. Only a few hundred units of Alpina’s annual production of roughly 1,700 cars make the trip from Buchloe, Germany, to the United States. Andreas Bovensiepen, the company’s CEO, told me he wants to keep it that way. The firm his father founded has always thrived by putting quality and rarity over volume.

There are a handful of seriously compelling alternatives to the Alpina B7, which starts at $142,800 before a $995 destination charge enters the equation. The Porsche Panamera is for the carvers. It’s the go-to option for buyers who want sharp handling above all, and some variants are much cheaper than the B7. The Mercedes-AMG S63 is for the ballers. It’s a palace on wheels, and it’s the quickest of the lot. The B7 is for the cruisers. It eats asphalt for miles on end while remaining calm and collected.

I’d order my B7 in Alpina green metallic, a brand-specific shade not available on the common 7 Series. The B7 comes generously equipped with a long list of standard equipment, including tech features like a head-up display, a Wi-Fi hotspot, and wireless device charging, so I wouldn’t add anything else.

Yes. If you have the means, you should buy an Alpina B7.

What makes it better than the BMW M7? That’s a trick question: there is no M7. BMW won’t make one. Alpina’s other models all have an M-badged equivalent, but if you want a high-performance 7 Series, this is it. I’m fine with that; this is what a sportier 7 should be, anyways, not a wing-festooned, pissed off-sounding, carbon fiber-wearing limousine masquerading as a track car.

Exclusivity is the cherry on top; you won’t see another one for 100 miles around. In that sense, it’s in a class of one. When it comes to covers, the 2020 Alpina B7 is a convincingly well-rehearsed one.