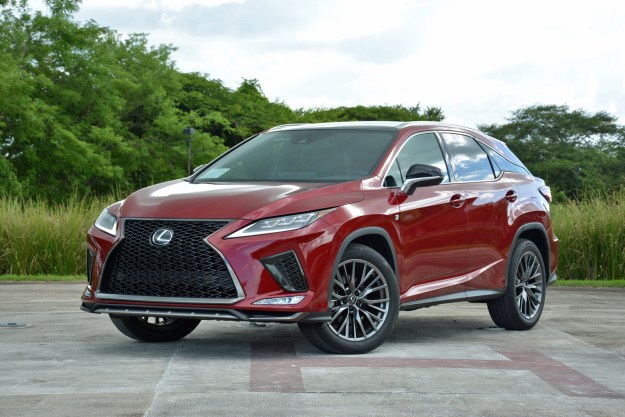 “The updates Lexus made to the RX for the 2020 model year finally bring its tech quotient up to par.”

The world of infotainment systems is split into two continents.

Automakers who believe the best way to navigate an infotainment system is by poking a screen convene in the first geography. The brands who argue installing a touchpad or a dial on the center console is more intuitive defend the second landmass. Lexus planted its flag squarely between the two opposed groups by upgrading the touchpad-equipped RX with an Android Auto-ready touchscreen for the 2020 model year.

Lexus actually has roots on both sides of this argument. It started its tech journey in the touchscreen republic, but it later sought refuge in the touchpad nation. Michael Moore, the national manager of Lexus product marketing, told me his team ultimately settled in the neutral zone between the two to let customers choose which side they pledge allegiance to.

Making a screen touch-sensitive can’t be done via an over-the-air software update. Since most motorists don’t have Inspector Gadget’s powers, Lexus had to redesign the top part of the RX’s dashboard in order to move the screen closer to the front occupants. The screen itself is new, too. An 8.0-inch display comes standard, and upmarket trims benefit from a 12.3-inch unit. Even the smaller screen stands out with sharp graphics, a quick response time, and a logical menu structure. Don’t take these attributes for granted: even in 2019, it’s not impossible to find an infotainment system with 8-bit computer-like graphics, or a menu structure that makes as much sense as the writing inside the pyramids.

Lexus launched the RX 350 in Costa Rica, which is not the ideal place to discover the ins and outs of a new infotainment system. The roads are dotted with motorcycles carrying large items you’d expect to see in a pickup, as well as 1990s sedans driven by folks who consider seating capacity a ballpark suggestion. Why did the iguana cross the road? I don’t know, but no one taught it to look both ways before stepping onto the asphalt. The slightest lapse of attention promises to feed the RX a coconut tree through its spindle grille.

Lexus did its homework, though. The screen is easy to reach from either of the front seats, and the home menu’s icons are clearly labeled. They’re neatly arranged in a row on the bottom part of the screen. Navigation, audio, phone, climate, and car settings are a poke away. The new interface is a significant improvement over the one in the outgoing, pre-facelift RX, but the touchpad remains, and you can’t completely ignore it. Returning to the home menu requires pressing a physical button on the center console, or pressing the back arrow on the screen to exit the sub-menus one at a time, which is a point against the system. So close, Lexus. So close.

Lexus and parent company Toyota spent years firmly resisting Android Auto and Apple CarPlay due to safety and privacy concerns, but neither company could put the wishes of their customers on mute for very long. Buyers demand smartphone connectivity, regardless of whether they’re buying an economy car, a supercar, or something in between. Even Lamborghini makes it a priority. That’s why the RX is one of the first Lexus models available with both Android Auto and Apple CarPlay. Smartphone connectivity and a revamped infotainment system might sound like frivolous updates, but they make a major difference when using the RX daily.

The RX’s newfound status as a global citizen in the infotainment world allows me to spend less time fiddling with the touchpad and focus on how it drives, feels, and looks. Mechanically, the 2020 and 2019 models are identical. I spent the bulk of my time behind the wheel of the five-seater RX 350, which uses a 3.5-liter V6 rated at 295 horsepower and 268 pound-feet of torque. It sends its output to the front wheels through an eight-speed automatic transmission, but the model I’m driving through the hills of Costa Rica comes with the optional all-wheel drive system.

Not all 300-horsepower cars are created equal; while it has a sport mode, the 4,400-pound RX prefers not to be rushed. It summons every horse in its stable when I floor it to pass an overloaded Mercedes-Benz L-Series truck struggling its way up a hill, but it’s much happier to cruise along without flexing its muscles. It’s a serene place to travel in, and one of the smoothest-riding cars in its segment, two traits it shares with all of its predecessors. The qualities that helped the original RX from 1998 define the crossover segment are still present in the 2020 model, but they’re bolstered by a sharper design and top-notch interior materials that look and feel properly assembled.

What I like the most about driving the RX 350 is that it feels like a Lexus, not like an attempt to rip off BMW, Mercedes-Benz, Cadillac, or another automaker on the company’s long (and growing) list of rivals. Lexus does design, tech, and ride quality in its own way; blazing a path instead of following an existing trail has been one of its values since its inception in 1989.

The touchscreen in the 2020 Lexus RX stands out with sharp graphics, a quick response time, and a logical menu structure.

I avoid another iguana as I bring the RX 350 back to the hotel doubling as my basecamp, drop it off, and grab the keys to the more expensive RX 450h. Spending a few thousand dollars more adds a gasoline-electric hybrid powertrain that teams the aforementioned V6 with three electric motors to deliver 308 horsepower. The setup channels its power to the four wheels, but it uses a continuously variable transmission (CVT) instead of an eight-speed automatic. No amount of technology can fully eliminate the droning associated with CVTs, and it’s present in the 450h (though not overly so), but the trade-off is that the hybrid system returns an EPA-estimated 30 miles per gallon in a combined cycle. To add context, the best mileage you can expect to achieve with the non-hybrid RX 350 is 22.

Lexus made small visual changes to both variants of the RX. Look closely, squint, and tilt your head and you just might notice the headlights have a new-look design. The spindle grille – which the company is reinventing as it prepares to electrify – received minor revisions, and stylists gave the rear lights a nip and tuck. These updates play second fiddle to the tech improvements outlined earlier, though. They’re the proverbial cherry on the cake.

How Digital Trends would configure this car

We’d start with the non-hybrid, five-seater RX 350. It’s better to drive than the RX 450h, we prefer having a conventional automatic transmission, and the third-row seats in the RX L are only suitable for small children. Every RX regardless of powertrain or body style comes generously equipped with a long list of safety features, including lane centering, bicycle detection, and road sign assistance, and adaptive cruise control, so there isn’t much you would need to add to build a comfortable, well-equipped crossover. We’d select the optional all-wheel drive system for extra peace of mind during the winter. Lexus hasn’t released pricing information yet, but a comparably-equipped 2019 model would cost about $45,000, and we don’t expect a massive increase for the 2020 model year.

Now that its tech quotient is finally up to par, the Lexus RX should be your go-to option if you want a comfortable, worry-free crossover that feels markedly nicer than a mainstream model. The updates it receives for the 2020 model year make it much easier to live with. The rest hasn’t changed: it’s still well-built, quiet, and peppy in spite of its chilled-out personality. Motorists who want a sportier crossover would do well to step inside a BMW or an Audi store, though.