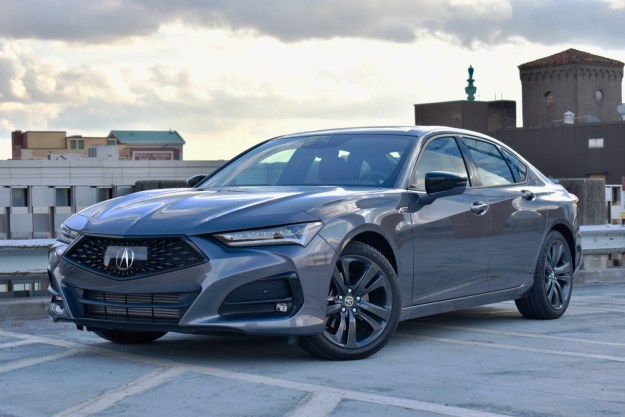 “The redesigned 2021 Acura TLX takes the fight to German luxury brands with style and sportiness.”

Like an aging millennial, Acura is looking to recapture the glory days of the 1990s. That golden age produced the first-generation NSX and the Integra Type R — which redefined what performance cars could be, and are now becoming collectible. With the possible exception of the current-generation NSX, nothing Acura has done since then has inspired the same level of enthusiasm from fans or critics.

The 2021 Acura TLX is the latest attempt at a comeback from Honda’s luxury brand. Acura threw everything it had at the new TLX, including a sophisticated all-wheel drive system and an unorthodox infotainment system, in an attempt to out-tech the competition. That competition includes the Audi A4, BMW 3 Series, Mercedes-Benz C-Class, Genesis G70, Infiniti Q50, and Volvo S60, plus newer entries like the Cadillac CT4 and recently updated Lexus IS.

The 2021 TLX is a redesigned model, but it still looks a bit familiar. That’s because Acura borrowed heavily from the well-received Type S concept, first shown in 2019. For the sake of brand continuity, the 2021 model also retains many styling features from the previous-generation TLX and other recent Acura models, including “Jewel Eye” LED headlights and a pentagonal grille. Designers have made a very different dish from those familiar ingredients, however.

Comparing the 2021 TLX to the 2020 model is like looking at the “before” and “after” photos in a Weight Watchers advertisement. The new model looks much tauter and sportier than the old version, and has better proportions, too. It has a lower roof and a wider stance than the 2020 TLX, so it looks like it’s skimming along the surface of the road, rather than towering over it. Acura also pushed the front wheels further forward, giving the 2021 TLX the classic cab-rearward silhouette that always makes for a good design. Those LED headlights are also slimmer, and sport curved elements inspired by the Acura ARX-05 race car’s headlights.

Under the skin is a new Acura-exclusive platform, so the TLX isn’t just a gussied-up Honda Accord. Acura quotes a 50% increase in overall torsional stiffness compared to the previous-generation TLX, which is important for handling and refinement. Acura also used aluminum for the front bumper, hood, front fenders, and front damper mounts, primarily to improve front-to-rear weight distribution rather than for weight savings.

The new model looks much tauter and sportier than the old version, and has better proportions, too.

The interior is more sports car than sedan. The dashboard is low and inclined for better forward visibility, and a tall center tunnel puts controls closer to the driver’s right hand. On the inside, most other sport sedans feel like regular cars with some racer costume jewelry tacked on. This is a complete (and very functional) rethink of what a sport sedan interior could be– plus, you still get the racer bits. TLX A-Spec models get a flat-bottomed steering wheel, metal paddle shifters, and leather upholstery available in bright red.

The 2021 Acura TLX doesn’t offer appreciably more interior space than the 2020 model, and actually has slightly less rear headroom. The 2021 TLX also has the least rear headroom among its competitive set, and is near the bottom of the rankings on front headroom as well. The Acura has less front and rear legroom than the segment-leading Lexus IS and Audi A4, but none of these sedans are particularly generous in that area.

The TLX does offer more shoulder room than its competitors, creating a feeling of spaciousness despite the relatively tight dimensions. Our test car’s seats were fairly comfortable, despite fairly thick side bolstering. We would have preferred more thigh bolstering, however, for added support while cornering. The Acura’s 13.5 cubic feet of trunk space is above average, but still far behind the 17.0 cubic feet of the BMW 3 Series.

Acura gave the 2021 TLX its True Touchpad Interface, so instead of a touchscreen, you get a trackpad. Similar to a laptop, moving your finger across the pad manipulates a cursor on the screen, but the cursor automatically jumps from icon to icon for better control. While it was easy to use, we didn’t see the advantage of this interface over a touchscreen, or the rotary controller you get with BMW’s iDrive system.

Besides the unorthodox True Touchpad Interface, the rest of the infotainment system wasn’t that remarkable. Except for cute animations for the drive modes, the display screen’s graphics were plain, and while competitors like Audi and BMW offer all-digital instrument clusters, every TLX model gets analog gauges with a 7.0-inch TFT display sandwiched in between. We appreciated Acura’s inclusion of analog controls for important functions — including scroll knobs on the steering wheel — but would have also liked buttons to answer and end phone calls.

The 17-speaker audio system offered good sound quality, as one would expect from a high-end system.

At higher speeds, the adaptive cruise control impressed with smooth acceleration and deceleration, although, as is often the case with these systems, its lane-centering feature had some trouble with even the gentle curves encountered on highways. The lane-departure warning system was also a bit oversensitive, flashing its warnings like an particularly nervous driving instructor.

Sportiness is supposed to be one of the main selling points of the TLX, and on paper, it looks pretty good. The TLX comes standard with a 2.0-liter, turbocharged four-cylinder engine that produces 272 horsepower and 280 pound-feet of torque. That’s better than the standard powertrains in most competitor sedans, and there’s a more powerful Type S version on the way. It will get a 3.0-liter turbocharged V6, with an estimated 355 hp and 354 lb.-ft. of torque. A 10-speed automatic transmission with paddle shifters is the only gearbox available.

The TLX gets standard front-wheel drive, which normally isn’t the best foundation for a sport sedan, but our test car had the optional Super Handling All-Wheel Drive (SH-AWD) system. This is one of the most sophisticated all-wheel drive systems on the market, capable of sending up to 100% of torque to the rear wheels under certain conditions (the default split is 30/70 front/rear) to mimic the feel of rear-wheel drive. It can also shunt torque between the left and right rear wheels — known as torque vectoring.

SH-AWD provides tons of grip, allowing you to open the throttle pretty much whenever you want without fear of losing traction.

Why is all of that important? A rear-biased all-wheel drive system lessens the workload of the front wheels, which already have to steer and do most of the braking. By sending more power to one rear wheel, torque vectoring also helps turn the car into corners by bringing the rear-end around, effectively using that power to help steer the car from the back. The fourth-generation SH-AWD system in the 2021 TLX amplifies this effect slightly more than the outgoing version, and can transfer power from the front to the rear axle 30% quicker, according to Acura.

SH-AWD is the TLX’s secret weapon. It provides tons of grip, allowing you to open the throttle pretty much whenever you want without fear of losing traction — it’s as if the laws of physics no longer apply. Torque vectoring also makes the car feel agile, despite lackluster steering. In our hands, the wheel felt too imprecise in the TLX’s “Normal” and “Comfort” drives modes, while “Sport” mode added so much heft that the wheel felt like it was spring-loaded.

On twisty roads, it felt like the all-wheel drive system was doing most of the work, magically fixing everything regardless of what the driver did. That was confidence-inspiring, but was also something drivers of more traditional sport sedans might not like, and made us wonder if we would have been as impressed with a base front-wheel drive TLX.

The turbocharged engine provided more than enough thrust, with only a hint of the lag in throttle response normally associated with turbos. Ride quality was on the harsh side, but not unreasonable for a sporty car like this (if you want unadulterated luxury, the Mercedes-Benz C-Class or Volvo S60 are better choices), and the higher-level Advance Package includes adaptive dampers, which might have offered a better compromise between ride and handling. In short, the TLX is the real deal when it comes to performance, but it has a different feel than its rivals.

Our ideal TLX would be similar to our test car — an SH-AWD model with the A-Spec Package. As noted above, SH-AWD is the TLX’s standout feature, and offers better foul-weather capability than front-wheel drive, so it would be worth the extra money (it’s a $2,000 option) in our opinion.

The A-Spec Package includes styling features that help the TLX stand out, as well as all of the major tech features. Gray 19-inch wheels and available red leather upholstery provide style, and the 17-speaker ELS Studio sound system and wireless phone charging are included as well. The A-Spec is also bundled with the Technology Package, which includes rear-seat USB ports, blind-spot monitoring, rear cross-traffic alert, and front and rear parking sensors.

The range-topping Advance Package adds features like wood trim, heated outboard rear seats, a head-up display, and a surround-view camera system, but we didn’t find ourselves missing those features during our week with the A-Spec model.

The 2021 TLX is Acura’s strongest effort yet to recapture the magic of its early days. It’s not perfect — the Genesis G70 offers better driving dynamics, the BMW 3 Series has a better infotainment system, and the Cadillac CT4 and Volvo S60 have more sophisticated driver-assist tech — but the TLX offers a good combination of sporty driving dynamics and high-end features. More importantly, it has a unique character.

Plenty of other sedans offer laundry lists of features, a lively driving experience, and the allure of a luxury brand. It’s not enough to build a car that’s fancier than an ordinary grocery getter — luxury cars already fill Whole Foods parking lots across the nation. The TLX succeeds because it’s something different — just like those 1990s Acura icons.

Granted, that also means the TLX won’t be for everyone. Whether it’s the car you will depend on whether you enjoy its mechanized driving experience, and can live with its unusual infotainment interface. The other defining features of the TLX — its exterior and interior styling — are also subjective. Every car (and car company) has its quirks, but this Acura’s are more visible than most.

Yes. The TLX may be different, but that’s a good thing.