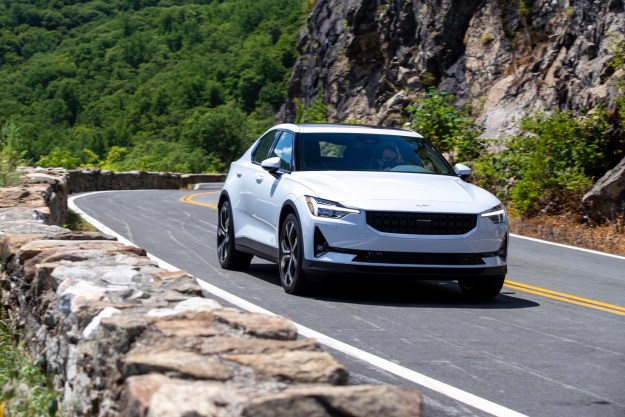 The Swedish automaker is going all-in on electric cars and hybrids, but didn’t think its own brand name would convey that change. So in 2015, Volvo recycled the name of a tuning company to create Polestar as a showcase for green tech. The brand launched with the Polestar 1 plug-in hybrid coupe, and is following that up with the Polestar 2 electric car. As a high-end electric vehicle (EV), the Polestar 2 seems like a Tesla Model 3 rival, but Polestar claims that’s not the case.

Polestar may have trouble convincing customers of that. In size and purpose, the Polestar 2 closely resembles the Model 3. Polestar will initially sell its car only in a fully loaded, dual-motor all-wheel drive Launch Edition configuration with a $61,200 base price — about $5,000 more than the top Model 3 Performance. However, unlike new Tesla purchases, Polestar vehicles still qualify for the full $7,500 EV tax credit (as well as some state and local incentives). Less-expensive variants are also on the way, Polestar has said.

The Polestar 2 inherits design cues from parent Volvo, and it rides on the Compact Modular Architecture (CMA) platform used by the Volvo XC40. The exterior is a carbon copy of the Volvo Concept 40.2 concept car of 2016. That means the Polestar 2 looks like a sedan, but has a rear hatch instead of a trunk. It also has a more SUV-like ride height, although it doesn’t feel that way from the inside.

From behind the wheel, the Polestar 2 feels more like a car than an SUV, largely because of the way Polestar designed its battery pack. While many electric cars have a long, flat battery pack mounted under the floor, Polestar opted to stack the individual modules, putting some under the floor, others under the rear seat, and still more modules down the centerline of the car. This gives the Polestar 2 a lower floor than the Model 3, making it feel more like you’re sitting in the car rather than on it. The car also has a pronounced central tunnel dividing the cabin, similar to the transmission tunnels in gasoline cars.

Like Tesla, Polestar went for a minimalist interior design, but with some more traditional elements. Instead of just dropping a touchscreen in the middle of the dashboard and calling it a day, Polestar kept the gauge cluster and shifter, giving the interior a more conventional layout.

The Polestar 2 also comes standard with a vegan interior, including carpets made from recycled plastic, recycled wood trim, and upholstery made from a fabric called WeaveTex. A Nappa leather interior is optional, but the vegan version was nicely executed, and fits better with this electric car’s mission of sustainability. It’s just too bad that Polestar threw in cheap-looking gloss black plastic on surfaces that will likely be touched frequently — leading to smudges and scratches.

Like Tesla, Polestar went for a minimalist interior design, but with some more traditional elements.

The Polestar 2 is the first production car to get Google’s Android Automotive OS, which bakes Google apps into the infotainment system. Instead of generic voice controls and navigation, you get Google Assistant and Google Maps. The infotainment system can also sync with your personal Google account for added customization.

The Polestar 2 also gets Apple CarPlay and Android Auto, along with basic Bluetooth connectivity, as standard equipment. Non-Android users can still get the same functionality they would with projection apps on other infotainment systems, including the ability to make calls and send text messages. Polestar only anticipates connectivity for “select” Apple apps, however, and CarPlay won’t be available at launch. Polestar plans to add it via an over-the-air update in 2021.

If your personal preferences lean toward Android, this is a great setup. Graphics displayed on the 11.1-inch central touchscreen and 12.3-inch digital instrument cluster were excellent, particularly for maps. The touchscreen was also very responsive. If Google apps aren’t your favorite, however, there isn’t as much of a benefit to this system.

If your personal preferences lean toward Android, this is a great setup.

The Polestar 2 will also get a Digital Key that lets drivers use smartphones to unlock and drive the car, as well as grant access to other users. Tesla is the only other automaker to offer this functionality on an electric car so far, although Hyundai and Lincoln have similar features for gasoline vehicles. Digital Key won’t be available at launch; it will be added later via an over-the-air update.

At launch, the Polestar 2 will be sold exclusively with a dual-motor all-wheel drive system. Combined output from the two motors is 408 horsepower and 487 pound-feet of torque, which will get the car from zero to 60 mph in 4.4 seconds, according to Polestar. That’s the same as a Tesla Model 3 Long Range, but the Model 3 Performance does zero to 60 mph in just 3.2 seconds, according to Tesla.

Our test car also had the optional Performance Pack, which adds 20-inch forged alloy wheels, Brembo brakes (with calipers designed specifically for Polestar to reduce aerodynamic drag), and adjustable Öhlins dampers. These upgrades made a big difference on the road, providing the perfect complement to the electric powertrain’s punchy acceleration.

Even on a fairly firm setting (one of 22 that need to be manually changed), the adjustable dampers kept the driver’s spine intact while traversing broken New York City pavement. Once free of city traffic, they gave the Polestar 2 a tight, confidence-inspiring feel in corners. Regenerative braking allows for one-pedal driving on its most aggressive setting, but the left pedal still has a predictable, linear response should you need to use it. The weak point was the steering, which didn’t feel as dialed in as the other components. The Polestar 2 might be a very nimble car, but it’s impossible to tell from the vague response of the wheel.

The Polestar 2 gets a 78-kilowatt-hour battery pack, but only 75 kWh is usable. Official range figures aren’t available yet, but Polestar expects more than 200 miles based on Environmental Protection Agency (EPA) testing. In a third-party test commissioned by Polestar, the car achieved 205 miles of range on a closed course in hot weather. That means the EPA-rated range will likely be higher, but likely not enough to match the Tesla Model 3 Long Range’s 322-mile maximum.

Charging takes 11 hours from an 11-kilowatt home wall box charging station or, if you’re really desperate, 22 hours from a standard 120-volt household outlet. DC fast charging at up to 150 kilowatts can provide an 80% charge in 40 minutes.

Safety ratings from the Insurance Institute for Highway Safety (IIHS) and National Highway Traffic Safety Administration (NHTSA) aren’t available yet, but Polestar expects its first EV to perform well in crash tests. The car sports special crash structures designed to protect the battery pack in the event of a crash and to account for the lack of an engine in occupant crash protection.

Configuring a Polestar 2 is simple, because the only options are the Performance Pack ($5,000), Nappa leather upholstery ($4,000), 20-inch wheels ($1,200), and special paint colors ($1,200). The Performance Pack’s Brembo brakes and Öhlins dampers are worth the extra money, but the leather upholstery seems unnecessary. The standard interior is already pretty nice, and gives the car even more green credibility.

Upon closer inspection, the Polestar 2 really isn’t like the Tesla Model 3. It can’t match the Tesla on range or performance and, despite its reputation for safety innovation, Polestar parent Volvo still doesn’t have an answer to Tesla Autopilot. The specs don’t tell the whole story, however.

From its frowning face to its touchscreen-centric interior, the Model 3 asks buyers to throw away everything they know about driving. It’s a futuristic car that never lets you forget that fact. Instead of anticipating the driver’s needs, the Model 3 expects the driver to follow its lead. The Polestar 2 does things differently.

Polestar’s first electric car feels like its t10th. From the interior layout to the suspension tuning, every detail feels well-thought-out, and born of the experience of an established automaker, rather than a newcomer. The market’s demand for something new may have led to the creation of Polestar, but it’s Volvo’s experience that makes this car so good.

The Polestar 2 takes everything that’s good about electric cars and presents it in a familiar package. It’s an approach that could probably win a lot of converts as electric cars go from being a curiosity to a commodity. It’s too bad Polestar doesn’t plan to chase Tesla’s sales volumes, at least not right away. For now, the brand is targeting annual numbers in the “tens of thousands,” rather than the hundreds of thousands of cars Tesla currently builds annually, U.S. boss Gregor Hembrough told Digital Trends.

Yes. Between the Polestar 1 and Polestar 2, Volvo’s new brand is off to a great start.