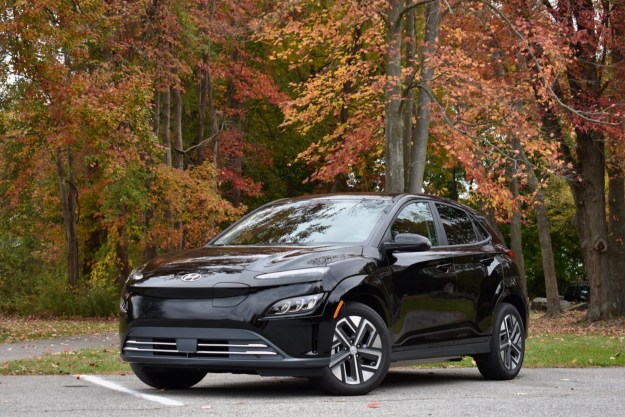 “With 258 miles of range and loads of tech, the Kona Electric makes a great EV entry point.”

Electric cars based on existing gasoline models can feel half-baked, but the 2022 Hyundai Kona Electric looks like the exception to that rule. The gasoline Kona was already a good subcompact crossover SUV, and the Kona Electric adds an impressive 258-mile range. To find out if this EV was as good in real life as it appears to be on paper, we spent a week driving one.

The Kona Electric launched as a 2019 model and gets some notable updates for the 2022 model year. Highlights include wireless Apple CarPlay and Android Auto, its Digital Key feature, and the same new touchscreens used in other Hyundai models. Hyundai made some exterior styling changes as well but didn’t make any powertrain changes, so range remains the same.

Hyundai offers the Kona Electric in base SEL and our test-model Limited, which start at $35,185 and $43,685, respectively (all prices include a mandatory $1,185 destination charge). The Kona Electric is also eligible for the full $7,500 federal tax credit and may qualify for state and local incentives, depending on where you live.

Hyundai has promised a line of electric cars based on a dedicated platform, but for now, the Kona Electric shares its underpinnings with gasoline models. That means it has largely the same exterior styling as gasoline Kona models, with stacked headlights and daytime running lights, plastic body cladding, and a shape that’s somewhere between an SUV and a conventional hatchback. Gasoline or electric, the Kona looks like nothing else on the road.

Electric models are distinguished by a blanked-off grille (which also houses the charge port) and model-specific wheels that, Hyundai says, optimize aerodynamic efficiency. Styling tweaks for the 2022 model year include functional front-bumper vents, reworked lighting, and a new rear bumper. The changes are fairly subtle, however.

The interior is virtually identical to the gasoline Kona’s. The main difference is a set of buttons that replace the gasoline model’s shift lever. The interior design is clean and functional, with a handy storage tray below the center console. The only downside was material quality. Nearly everything was plain black plastic, and while that would be fine at the price point of a basic gasoline Kona, it didn’t seem appropriate given our test car’s roughly $43,000 MSRP.

Gasoline or electric, the Kona looks like nothing else on the road.

Our test car had the larger touchscreen, which carries over from other Hyundai models. That’s not a bad thing, as we’ve had positive experiences with the same unit in the past. The screen’s sensible layout, well-designed graphics (including old-fashioned vacuum tubes for the radio menu), and responsiveness have made it one of the best from a mainstream automaker. That’s still the case here.

The Kona Electric does an exceptionally good job of displaying charging information. A tab on the right side of the screen shows the battery pack’s state of charge, a range estimate, and locations of nearby charging stations. You can also set the charging-station search by station type, and even by major networks like ChargePoint or Electrify America. It’s an intuitive setup that should be reassuring to first-time EV drivers while providing the functionality more educated drivers will likely appreciate.

The screen’s sensible layout, well-designed graphics, and responsiveness make it one of the best from a mainstream automaker.

All Kona Electric models also get a standard 10.25-inch digital instrument cluster with EV-specific displays for things like charge level and regenerative-braking use. Everything was easy to read, and the information was well organized, but we found the default white-on-black setting to be a bit too bright (there’s a night mode too).

The Kona Electric can also be equipped with Hyundai’s Digital Key feature, which lets the driver use a smartphone in place of a traditional key fob. Drivers can lock or unlock the doors, start the car, and drive with only a connected phone. However, this feature only works with Android phones.

The Kona Electric’s single motor produces 201 horsepower and 291 pound-feet of torque. That’s about the same amount of horsepower you get in a base VW ID.4 or a Chevy Bolt EV, but the Hyundai has substantially more torque.

Copious torque provides more of a kick off the line than the Kona’s gasoline siblings.

That copious torque provides more of a kick off the line than the Kona’s gasoline siblings, or induces futile wheelspin if you’re not careful. Robust acceleration is a feature of every electric car, though, because electric motors provide instantaneous torque delivery. Drivers can choose from different levels of regenerative braking via paddle shifters. The lowest setting effectively allows the car to coast at highway speeds. The highest setting provides substantial deceleration when lifting off the accelerator pedal, but falls a bit short of the one-pedal driving most EVs aspire to.

The Kona Electric couldn’t distinguish itself from other EVs in handling, lacking the solidity of the VW ID.4, and the nimbleness of the Chevy Bolt EV and EUV. The electric model’s sloppy handling also felt like a downgrade from the last gasoline Kona we tested. The cabin did at least keep road noise out (all Kona models get more sound-damping acoustic glass for 2022) and the ride was fairly comfortable most of the time. However, the suspension failed to absorb even small bumps, transmitting a harsh jolt into the cabin every time.

At 258 miles, the Kona Electric offers substantially more range than most other similarly-priced EVs, handily beating the Kia Niro EV, Ford Mustang Mach-E, and Nissan Leaf. The Chevy Bolt EV offers 259 miles of range, but that falls to 247 miles for its Bolt EUV sibling. The Volkswagen ID.4 is rated at 260 miles of range in base rear-wheel-drive Pro trim, and achieves that with more SUV-like amounts of passenger and cargo space.

When it’s time to recharge, however, you may be in for a long wait. Hyundai says the 7.2-kilowatt onboard charger takes nine hours to fully recharge the 64.0-kilowatt-hour battery pack from a 240-volt Level 2 AC source. The Kona Electric is also equipped for DC fast charging at 70 kW, which Hyundai says can accomplish a 10% to 80% charge in 47 minutes. However, it took us just over an hour to go from a 25% to 80% state of charge, and we only got a peak charge rate of 39 kW. While a single charging session does not make for a scientific conclusion, that’s not encouraging.

Full crash-test ratings for the Kona Electric aren’t available. The gasoline Kona did well in Insurance Institute for Highway Safety (IIHS) testing, but those results may not be directly applicable to the electric version. The National Highway Traffic Safety Administration (NHTSA) hasn’t published crash-test ratings for the Kona Electric either but, again, the gasoline Kona performed well in the federal agency’s tests.

As mentioned above, Hyundai’s infotainment systems require you to make a choice when it comes to tech. The base Kona Electric SEL trim level gets wireless Apple CarPlay and Android Auto, but the Kona Electric Limited gets a larger touchscreen with better graphics. We would opt for the Limited model and its bigger screen, which we think would be more appreciated in daily use. The Limited also adds other tech features.

This high-end Kona Electric gets standard wireless device charging, Hyundai’s Digital Key, and the battery-warming system. Those three features are available as part of an extra-cost Convenience Package on the Kona Electric SEL, but that adds $3,500 and thus closes the gap with the Limited’s base price. The Limited trim also gets adaptive cruise control. That’s not available on the SEL at any price.

The Kona Electric bucks the trend of mediocre EVs based on gasoline cars. It offers an impressive range for the price while keeping the well-designed interior and funky styling of the gasoline Kona. However, it’s let down by low-power charging and a lackluster driving experience.

The Hyundai’s cramped interior and small cargo area would be a liability when compared to conventional crossover SUVs, but it’s a similar story with the Nissan Leaf and Chevy Bolt EV/EUV (which are currently undergoing a major recall). Only the recently-launched Volkswagen ID.4 offers a truly SUV-like experience, with more cargo space and an all-wheel-drive version on the way.

Marketing categories aside, the Kona Electric excels as a budget EV. It offers plenty of tech for the price, and enough range that most drivers won’t be inhibited, although uneven deployment of charging infrastructure could still make things inconvenient for some people. The upcoming Hyundai Ioniq 5 will be the automaker’s true future-tech statement, but anyone ready to take the EV plunge right now won’t be disappointed by the Kona Electric.

Yes. The Kona Electric doesn’t feel like the car of the future, but it’s an excellent EV for today.