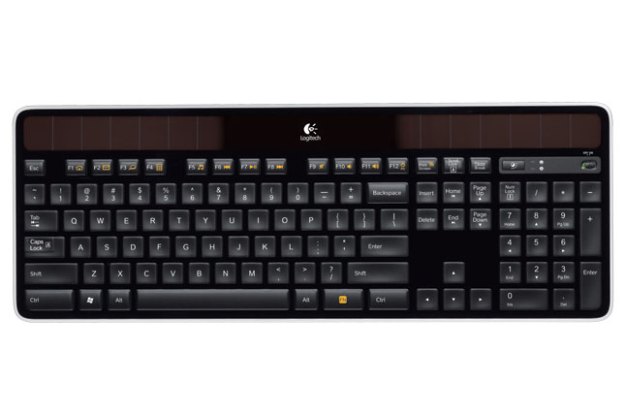 “Forget any notion of “going green” or saving the planet with a solar-powered keyboard, the Logitech K750 sells itself with convenience alone.”

When you have companies slapping solar cells on everything from cell phones to backpacks so they can tie on recycled-cardboard tags with hemp cord, call them green, and charge twice the price, it’s easy to get jaded and dismiss solar gadgets as gimmicks. Until about the third time you have to replace or recharge the batteries in your wireless keyboard, and realize a solar panel would eliminate that need forever. Like calculators and watches, Logitech’s K750 proves that wireless keyboards make ideal candidates for solar-panel transplants, giving users both convenience and a clear conscience.

At first glace, some users might not even give second thought to the inch tall strips of solar cells above the keys on the K750. Surrounded by black and situated under a seamless, glossy layer of plastic, they stand out less than you might imagine, but provide all the power the keyboard needs.

The bigger news here, from a design standpoint, is Logitech’s transition to the Chiclet style of keys, formerly a space-saving style reserved for notebooks (think MacBooks and Sony Vaios). Rather than being arranged in a “tray,” the keys pop out of a flush piece of plastic that runs all around them, with squared-off edges like Scrabble tiles instead of the traditional taper. The look is largely a matter of taste, but as we’ll get to below, the feel can be quite different.

As for the rest of the keyboard, anyone acquainted with Logitech’s Revue (the Google TV set-top box) will immediately recognize the K750. The glossy black top and white trim around the edges make it an obvious relative of the humble Revue keyboard. We weren’t huge fans of the Revue’s keyboard, but fortunately, the K750 is more like a cousin than a brother. The tightly packed keys of the 10-inch Revue keyboard spread out to fill 16 inches on the K750 including a number pad, the keys take on a more angular look, and instead of an oversized Playskool font, the K750 uses a clean, corporate-looking sans serif. Long story short: It looks more mature.

At only ⅓ of an inch thick, the K750 makes even previously slim keyboards like the DiNovo Edge look, well, a little plump. Two folding legs in the back boost the keyboard about an inch off the desk to give it a more comfortable slope. Though they look flimsy, the K750 actually feels very firm and “planted” on a desk, without the rattle that cheap keyboards sometimes have as they bounce away beneath your fingers.

Logitech keeps the key arrangement on the K750 pretty typical. A function key below the question mark key in the lower right provides access to an array of shortcuts on the upper F keys, including search, calculator, media controls, volume, and power off.

The most unusual addition is a “Check Light” above the number pad. Pressing a lamp button lights up an LED indicator next either a smiling or frowning face to indicate whether battery life is good or on its way out. A power switch on the same panel makes it easy enough to turn off if you’re not using it, but in our experience, there was never any need to.

Unlike a Bluetooth keyboard, the K750 requires no dabbling with Windows settings, PIN codes or any other tomfoolery. It uses Logitech’s Unifying 2.4GHz platform, which basically means you just plug in a nano-sized USB receiver and it works — with Windows, anyway.

Tapping the sun as you tap keys turns out to be, well, not that different from typing on a battery-powered keyboard. Unlike your typical solar calculator, which turns useless the moment the lights go down, the K750 has a robust internal battery that will keep it plugging away for up to three months after the last sun exposure. Unless you’re living in a basement, cave, or Portland, the K750 should never leave you hanging. (Kidding, we actually got full power about three feet from a window with fluorescent overhead lights at our Portland office.)

Logitech includes a tiny Solar App that you can install in a matter seconds after plugging in the Unifying receiver. Although you don’t need it to use the keyboard, it provides some fun extras like a speedometer-style gauge to tell you how much sun you’re soaking up, in real time, and a battery meter. Our battery never dipped below 100 percent, but that’s with mostly daytime computing next to a window. Fluorescent overhead lamps alone typically got it between 180 and 280 LUX (out of 500). Even below our desk (simulating a sliding keyboard tray) or in a room we would consider too dim for even reading a book, it read 10 LUX or better.

We’ve never been a fan of the stubby key press you get with a Chiclet keyboard, but as far as the style goes, Logitech offers one of the better ones. The keys may not travel far, but there’s firm, affirmative pressure under each one and solid click when you get one all the way down — you’ll never be uncertain whether you pressed a key enough to get a letter on the screen. For an office environment, the K750 also has the advantage of being exceptionally quiet.

Despite the lightweight design seemingly catered to text entry, we had no problems taking up residence on the WASD keys and pressing the K750 into gaming service in Call of Duty, though the lack of “definition” between keys made it a bit easier to confuse one for another with a wandering ring finger. On the plus side, the red glow from 50 watts worth of lights in your gaming rig can power the thing. And your friends called your CCFL setup frivolous.

Using gloss black on a keyboard is a questionable choice. It’s not as bad at collecting fingerprints as you may suspect, but after just a few days of use, we saw noticeable dust building up on the panels above the keys. Nothing a quick shot of air duster or a wipe with the included microfiber cloth won’t fix, but we’ve never had to dust down good old “office beige” so frequently.

The biggest annoyance we ran into with the K750 came from the conspicuous lack of an indicator light for caps lock or num lock. Sure, you can just type a letter and find out whether it’s engaged or not, but when you’re entering in a password where every letter is shrouded with an asterisk, it can be a bummer.

Forget any notion of “going green” or saving the planet with a solar-powered keyboard, the K750 sells itself with convenience alone. Never have to replace a battery or recharge a keyboard again? Sign us up. Steep prices often kill the appeal of products like these, but Logitech’s letting these go for a reasonable $79.99, which strikes us as a small premium for the convenience of never changing a battery again (the company’s cheapest wireless keyboard goes for $49.99 and doesn’t have quite the style of the K750). Unless you disdain laptop-style keys and scoff at the idea of swabbing down your keyboard for dust now and then, Logitech’s K750 makes a sleek and practical addition to any desk.

Apple finally allows you to repair your own MacBook
Meta wants you to use its creepy Portal as a secondary monitor
Lenovo teams up with AMD and Nvidia to release two new workstations
Dell could be working on the same charging tech Apple has been developing
AMD is ready to battle Intel with next-gen 3D V-Cache CPUs
Corsair’s Xeneon Flex is the ‘bendable’ OLED monitor we always wanted
Samsung reaches new heights with this SSD, but it could go even higher
Chrome just added a great new way to protect your passwords
This game lets hackers attack your PC, and you don’t even need to play it
Apple M2 Pro and M2 Max MacBook Pro just received some good news
We finally might know what Apple will call its AR/VR headset
New AMD B650 Extreme motherboards are built for budget overclocking
This startup claims to have unlocked the secret to speedy CPUs