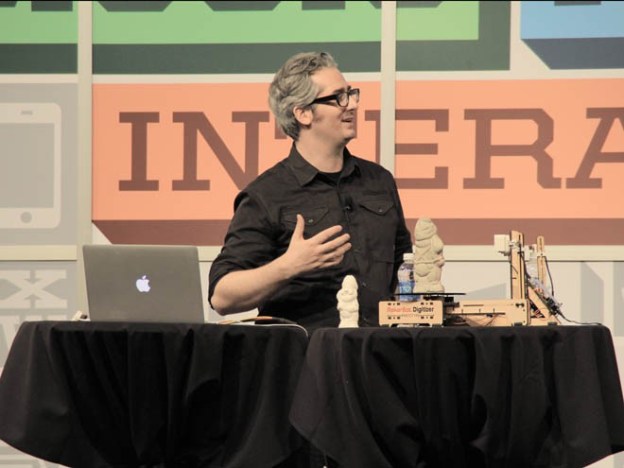 SXSW  is the land of the app launch, but hardware is making an impressive showing this year – and unsurprisingly, 3D printing is a big part of that. 3D printing innovator MakerBot is, of course, part of this evolution, unveiling a new design in Austin. It seems like it was just yesterday we were introduced to the Replicator 2X at CES, but Makerbot is continue to innovate and dominate this growing trend.

3D printing is absolutely amazing, but it’s still a fairly niche market, since most people don’t have the knowledge or the money to buy a printer and make designs on their own. MakerBot is setting out to change all that, and their newest 3D printing accessory is perfect for beginners – you don’t need to know anything about design software to use it, and it’s meant for your average person.

Called the MakerBot Digitizer Desktop 3D Scanner, this new device lets you scan objects and re-print them without worrying about some of the more confusing logistics. It’s fantastic for recreating a broken link on your bracelet or making a replica of your favorite cup. Instead of inputting a design, you can just throw whatever you want to recreate onto the scanner and let it work its magic.

The Digitizer can scan objects up to 8 inches tall and 8 inches wide. It uses lasers and a Web cam to scan stuff and turn them into 3D models.

“If you’ve seen Tron, this is kind of what happens when Flynn gets digitized into the game grid,” explained CEO Bre Pettis, who brimmed with excitement during his SXSW keynote.

The Digitizer Desktop 3D Scanner is still a prototype, and SXSW-goers get to be the first people to look at it and play around with it.

This is an exciting innovation because it makes 3D printing way more accessible to people who like the concept but don’t have the design skills to carry out their own creations. Instead of bringing the desired object somewhere to get scanned by professionals, this scanner gives individuals the power to make their own objects, at home, in a short period of time.

Topics
This 3D laptop screen was the coolest thing I experienced at CES 2023
AMD CES 2023: Ryzen 9 7950X3D, mobile Ryzen 7000, and more
AMD’s new Ryzen 9 7950X3D is up to 24% faster than Intel’s best
M3 MacBook Air may launch in second half of 2023
Best Apple Deals: Save on AirPods, iPads, MacBooks and more
You’ll be surprised how cheap this 27-inch QHD monitor is today
We now know how Apple’s VR headset may handle video, and it’s pretty awesome
Best HP laptop deals: HP Envy, HP Spectre x360, and more
The first RTX 4080 laptops are much cheaper than we expected
Intel targets RTX 3060 takedown with Arc Alchemist price cut
Perfect for school, this 14-inch laptop is discounted to $150 today
One of the best HP laptops you can buy is $250 off right now
Samsung’s 49-inch Odyssey G9 gaming monitor is $600 off today