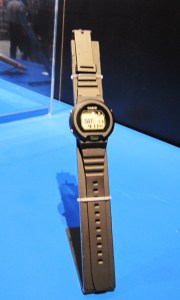 Casio is definitely drawing attention to its camera lineups this year, but it’s also got a watch prototype that’s getting some hype. It’s a Bluetooth enabled wristwatch that connects to a users smartphone. Developers have been making this kind of device for awhile, with the caveat being the necessity of a charger. Casio has engineered the ability for its prototype to use a standard watch battery (which generally last two years) to power the device while still making it Bluetooth 4.0 enabled.

The watch will connect to a phone, so that you get an alert on your wrist when you get calls, texts, or any other type of update. You can even reject a call or ignore an e-mail from the watch, as well as view your calendar. Possibly the most attractive feature is the automatic time zone update, so travelers will appreciate the immediately updated time change. In the future, Casio hopes to add public transportation, fitness and GPS functions.

We were warned to ignore the hardware, because it is a prototype and its looks are far from finalized – so don’t get too nervous about that impossibly small face on the watch. But even though it’s in beta, we were told that Casio projects a 2011 or 2012 debut, and claims that the watch won’t grossly out-price its other models. The relatively lengthy release date will also allow smartphones to catch up to its 4.0 capability.