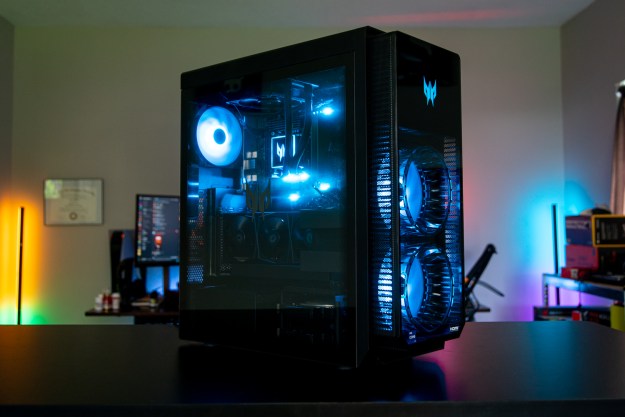 “The Acer Predator Orion 7000 would be among the better gaming desktops, if only it were a bit cheaper.”

Acer’s Predator Orion 7000 was one of the first Intel Alder Lake desktops announced last year, but it arrives at a time when most gaming desktops have already updated to Intel’s latest generation. We have the lay of the land, but the Predator Orion 7000 still manages to stand out among major PC vendors — despite its obscenely high price tag.

Most 12th-gen desktops I’ve looked at struggle with thermals and noise, as Intel’s latest chips push power requirements even higher. The Predator Orion 7000 doesn’t struggle with those issues, but its price puts it in a class of premium boutique PCs where the Orion 7000 struggles to keep pace.

For looks, the Predator Orion 7000 takes no prisoners. Two bright ARGB fans occupy the extended front panel, the GPU is mounted vertically to show off the cooler design, and the case is adorned with transparent panels on the front and side so you can see every element of your PC. This is an in-your-face PC.

Noise isn’t an issue on the Predator Orion 7000.

Thankfully, it stays cool, too. Even the toasty Core i7-12700K stayed around 70 degrees Celsius in a Cinebench run under a 120mm all-in-one liquid cooler. And in a 4K run of Cyberpunk 2077, the GPU never went above 80 degrees. The front panel is doing a lot of work here, offering a large amount of airflow into the front of the case to keep things cool. There’s a vent right by the GPU, too, so the vertical mount doesn’t choke off airflow as it does in the Asus GA35DX.

Noise isn’t an issue, either. I don’t suspect the airflow channels Acer has carved out for the intake fans and GPU are doing much, but whatever is going on, it keeps the Predator Orion 7000 quiet. At most, it has a low, barely audible hum. That was true even in my most intense gaming tests, which speaks to the design of the Predator Orion 7000.

The machine looks great, and it stays cool and quiet. You rarely find both of those together. There’s plenty of gamer flair, too, with customizable RGBs on the CPU cooler, intake fans, and exhaust fan through Acer’s included software.

Beyond the looks, the Predator Orion 7000 includes a hot-swappable 2.5-inch hard drive bay that you can populate with any SSD. It’s infuriating getting the microscopic screws out to actually install an SSD — it doesn’t come with one included — but I still love the option to swap a drive in without worrying about hooking up more cables.

Acer offers two models of the Predator Orion 7000, which makes the spec and pricing discussion much easier. The model I reviewed clocks in at $3,000 for a Core i7-12700K processor, 10GB RTX 3080 graphics card, 32GB of DDR5 memory, and 3TB of storage split across an SSD and HDD (1TB and 2TB, respectively).

There’s no easy way to slice this; the Predator Orion 7000 is too expensive.

The Predator Orion 7000 isn’t aligned with where GPU prices are right now. The MSI Aegis RS 12, for example, is around $200 cheaper when paired with the more powerful RTX 3080 Ti and identical specs. Acer doesn’t include the 12GB RTX 3080, either, which would go a long way in justifying the price of the Predator Orion 7000.

Above that configuration, you have a $4,500 model that jumps up to a Core i9-12900K and RTX 3090 (with identical specs otherwise). That’s $300 more expensive than the Origin Neuron with identical specs, and Origin allows you to customize your build however you want.

Where the Predator Orion 7000 mainly justifies its price is the case. It’s cool and quiet, as I covered in the first section, and comes with excellent connectivity. 2.5G Ethernet and Wi-Fi 6E lead with the latest networking options, and the case includes two USB-C ports — one on the top and one on the back.

There’s nothing holding you back from upgrading the Predator Orion 7000, technically. It uses all standard-sized components, and it includes empty hard drive slots if you need them. There are a lot of other factors making upgrades difficult, however.

The GPU is a good example. The airflow channel limits the size of the GPU you can use (though, you can mount the GPU horizontally by flipping the back plate). Similarly, there are empty SSD slots in the back, but Acer doesn’t included extra SATA cables. Thankfully, the HDD bay includes connections so you can easily swap in a mechanical hard drive.

Performing upgrades isn’t great either due to the haphazard cable management. It’s a similar level of cable management as the Dell XPS Desktop 8950 —  a PC that has a completely opaque side panel. Combined with the exposed chips on the RAM sticks and Wi-Fi module, the Predator Orion 7000 doesn’t look great if you stare at it for too long.

For non-gaming performance, there’s nothing too surprising for the Predator Orion 7000. The Core i7-12700K holds up in CPU tests like Cinebench and GeekBench, reaffirming that Intel’s 12th-gen CPUs are among the best processors you can buy. The Ryzen 9 5900X still competes in multi-core performance, though it’s falling behind in single-core performance while we wait for Ryzen 7000.

Processor performance is great, but the inclusion of DDR5 memory doesn’t do much for the Predator Orion 7000 in practice. There isn’t a gain in PugetBench for Premiere Pro where I’d expect it most, for example. Even with DDR4 in the Maingear Vybe, it managed to outperform the MSI Aegis RS 12 and Predator Orion 7000 (both equipped with DDR5).

You can see an overview of 4K gaming performance on the Predator Orion 7000 above (click the image to see a large version). Although the RTX 3080 may struggle in the most demanding games at 4K, it still reaches above 60 fps in most titles. And if you want even more performance, you can opt for the RTX 3090 configuration that will push your 4K frame rates even further.

The graphics card is one part of the equation, but the Core i7-12700K is doing a lot of work, too. As you can read in our Core i9-12900K review, Intel’s 12th-gen architecture is excellent for gaming. These processors run hot, but I never had any issues with thermal throttling or fan noise with the i7 while I was playing games.

I would’ve liked to see an option with AMD’s latest Ryzen 7 5800X3D, though. As you can read our Ryzen 7 5800X3D review, it’s the best processor for gaming right now. The Falcon Northwest Tiki includes this processor, so although the RTX 3080 Ti on that machine is offering some additional performance, AMD’s gaming-focused processor is, as well.

Although the Predator Orion 7000 is a monster of a gaming PC, it’s important to keep the price in mind. You can purchase similar machines for less, and you only have to spend a little more to get something as premium as a machine from Falcon Northwest.

Bloatware reigns supreme on the Acer Predator Orion 7000. Norton is by the far the most annoying, popping up with pleas to run a scan or renew the subscription several times while I was testing the machine. Acer bundles in several other pieces of adware, too, including Dropbox and ExpressVPN.

Outside of the bloat, Acer includes PredatorSense and PredatorArc, both of which are utilities focused on the gaming side of the PC. PredatorArc is specifically for Acer peripherals, though, so its inclusion is a bit strange. PredatorSense opens up lighting and basic CPU overclocking options, but it’s far from an in-depth utility.

The Acer Predator Orion 7000 is a fantastic gaming PC that’s only soured by its high price. It costs about as much as custom builds from Maingear and Origin without offering the same level of customization. It’s a better option than most of the gaming desktops you’ll find in your local Best Buy due to its low noise and excellent thermals. But you’ll find a better value with a custom-built PC if you take the time to configure one.

Yes, but only if you can’t be bothered to configure a PC with a system integrator. You’ll get a much better desktop with Maingear, Falcon Northwest, or Origin, and you might even save some money depending on your configuration.