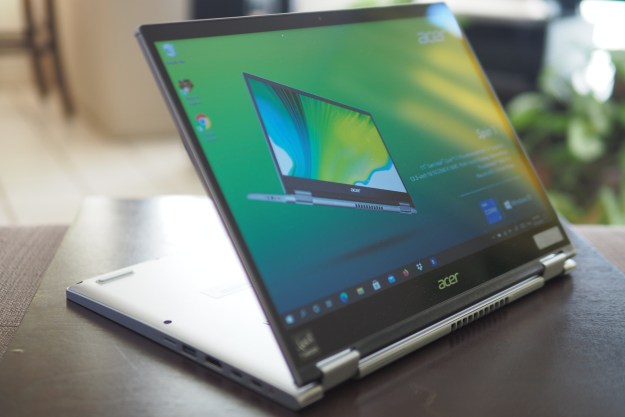 Acer’s Spin 3 is the company’s midrange entry in the 360-degree convertible 2-in-1 market. Its previous iteration was well-received as a 2-in-1 with some interesting features, such as a pen that recharged while docked in a convenient slot along the side, along with solid performance and build quality.

That wasn’t good enough for Acer, however, because it announced an updated version that alters the laptop’s design while promising to maintain what was best about the previous version. I went hands-on with a pre-release unit of the Acer Spin 3. Here are my initial impressions.

The most significant update to the Spin 3 is its switch to a display with a 16:10 aspect ratio rather than the usual 16:9. That makes the display taller, fitting in more information and reducing the need to scroll. Taller aspect ratios (16:10 and 3:2, mainly) are becoming more common, as laptops like Microsoft’s Surface line and most recently the Dell XPS 13 have led the charge, but Acer’s approach is different.

While Dell used close to the same display chassis size and simply filled it all with a 16:10 panel, leaving behind some tiny bezels and a 90% screen-to-body ratio, the Spin 3 has a large bezel on top and a surprisingly large chin on the bottom. The screen-to-body ratio is only 79%, meaning the Spin is not only less modern looking than the XPS 13, but it’s also larger than it could be. One benefit of Acer’s approach is that the wrist rest remains large and comfortable, unlike some tiny-bezel laptops where there’s barely enough room.

The Spin 3 feels far more solid than its price would suggest. Its lid resists any twisting, the keyboard deck has zero flex, and the bottom of the chassis doesn’t budge with rough handling. It’s an all-aluminum design this time around, where the previous version incorporated some plastic parts, and I can tell. I love the way the Spin 3 feels.

The Spin 3 is an attractive if unsurprising 2-in-1. My unit came in the usual semi-gloss silver found on so many laptops, and had only a few chrome pieces, including the Acer logo on the lid and hinge.

The hinge is well-tuned, allowing the lid to be opened with one hand while holding the display in place through all four modes — clamshell, tent, media, and laptop. That’s an attribute typically found on more expensive machines.

We haven’t tested enough Tiger Lake machines to draw any firm conclusions, but what we’ve seen from Intel’s reference machine gives us hope for some solid performance. At the very least, Tiger Lake should help close the distance with AMD’s Ryzen 4000 series, which so far has proven to be considerably faster than Intel’s 15-watt CPUs.

I found it plenty sharp (though I prefer 4K displays) with loads of contrast. Colors were natural and bright, and I thought the display did a wonderful job across all tasks I threw at it.

The 16:10 aspect ratio is great, too. It offers more vertical space, which is useful since documents and web pages are built to scroll vertically. You can simply see more on a 16:10 display than a 16:9 display.

The audio was competent, providing plenty of volume thanks to upward-firing speakers with zero distortion. Highs and mids were prominent and, as usual, the bass was at a minimum. I can see using the speakers for the occasional YouTube video and solo Netflix show, but for music and action movies I’d recommend a pair of headphones.

The Spin 3 utilizes the usual island keyboard with black keycaps and white lettering. I don’t know if the keyboard is backlit — I couldn’t find a button to turn it on. I thought the keycaps themselves were a little small and that impacted the spacing, and they were also a touch slippery. The mechanism was comfortable, though, with a light touch and a soft bottoming action that’s not as crisp as I like but still allowed me to type at nearly full speed.

The touchpad was moderately sized and plastic-coated. It’s a Microsoft Precision touchpad and so it was responsive in swiping and using multitouch gestures. The display is touch-enabled, of course, and the included Wacom AES 1.0 pen worked well for Windows inking.

Interestingly, my unit didn’t have Windows 10 Hello support, neither a fingerprint reader nor an infrared camera for facial recognition. I understand that while that will remain true with the base model, upgraded machines will come with a fingerprint reader.

I couldn’t run our usual battery tests and so I can’t report on longevity. The Spin 3 houses 56 watt-hours of battery, which is average for a machine with this size of display. I imagine that the Core i5 and FHD+ version will get very good battery life, while the Core i7 and QHD+ will suffer thanks to the extra power and higher resolution.

The Acer Spin 3 will start at $850 for an 11th-gen Intel Core i5, 8GB of RAM, and a 256GB solid-state drive (SSD). Other pricing and availability will be announced soon.

Topics
Best Apple Deals: Save on AirPods, iPads, MacBooks and more
Best 17-inch Laptop Deals: Get a large laptop for $330
Dell Laptop Deals: Save on XPS 13, XPS 15, XPS 17 and more
Apple Mac Mini M2 vs. M1: don’t make a buying mistake
Apple Reality Pro: everything we know about Apple’s VR headset
What MacBooks needs to learn from competitors about transparency
You’ll be surprised how cheap this 27-inch QHD monitor is today
We now know how Apple’s VR headset may handle video, and it’s pretty awesome
Best HP laptop deals: HP Envy, HP Spectre x360, and more
The first RTX 4080 laptops are much cheaper than we expected
Intel targets RTX 3060 takedown with Arc Alchemist price cut
Perfect for school, this 14-inch laptop is discounted to $150 today
One of the best HP laptops you can buy is $250 off right now