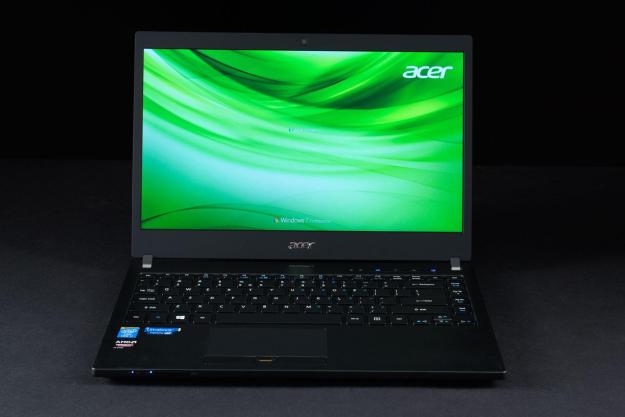 “Fast, durable and surprisingly affordable, the TravelMate P645 is a dull yet competent choice for anyone in need for a powerful Ultrabook.”

You could be forgiven for thinking that Acer’s “Aspire” sub-brand is a bit redundant. After all, almost everything the company makes seems to be slapped with that tag, no matter if it’s a $300 netbook or a $2,000 Ultrabook. But Acer does have other model lines, one of which is TravelMate, a series of serious notebooks built to take on Lenovo’s ThinkPad and HP’s EliteBook.

The name may sound familiar. Acer began to experiment with low-voltage processors in attractive, slim laptops long before Ultrabooks became a thing, and most of those early systems were sold as TravelMates. These attracted attention in 2011 by offering seven to nine hours of battery life while many competitors provided just four or five.

The value packed in the TravelMate P645 is hard to ignore.

Then, TravelMate faded from the spotlight, replaced by Aspire Ultrabooks like the S3 and S7. But that doesn’t mean Acer has given up. The latest model, dubbed the Acer Travelmate TMP645-MG-9419, boasts an impressive selection of modern hardware that includes an Intel Core i7-4500U processor, an AMD Radeon 8750M GPU and a 256GB solid state drive.

These specifications make the TMP645-MG-9419 one of the best equipped Ultrabooks we’ve tested yet. Plus, in typical Acer fashion, the price isn’t intimidating. Base models start at $1,050 online and our review unit, which has optional AMD graphics and a 1080p panel, goes for $1,250. Those seem like reasonable prices, but can Acer really compete with Lenovo’s ThinkPad T-Series, HP’s Elitebook line, and Apple’s Mac Pro?

The look of the Acer TravelMate TMP645-MG-9419 takes a page straight from Lenovo’s style guide. Unfortunately, it’s the page used to describe the company’s ThinkPad laptops. Matte black is layered upon matte black to create a forbidding, serious, monolithic appearance. While this helps you blend in during a business meeting, it’s a bit boring in other surroundings.

Touch the system, however, and the look begins to make sense. Acer used grippy, durable plastic to construct the chassis, which means scratches and fingerprints are not a serious concern. The chassis feels tight as well, and shows no sign of flex no matter how it’s handled. Picking the TravelMate up from a corner is like picking up a slab of granite.

Connectivity is robust thanks to three USB 3.0 ports, HDMI, VGA, Ethernet, separate headphone/microphone jacks and an SD card reader. Two of the USB ports are located near the front of the right flank, however, which means wired devices could interfere with the use of an external mouse for right-handed users. The ports on the left side are positioned further back.

While the quality of this TravelMate suggests it could be a serious business Ultrabook, the keyboard falls short. Beyond the layout, which is spacious and offers large keys, there’s little reason to recommend it. Key travel is short and bottoms out vaguely, which provides little confidence for touch-typists, and the flat, square key caps don’t provide much tactile feel.

Back-lighting is standard, but there are no adjustable brightness settings. That’s unfortunate, as the default setting is too bright for comfortable use in a dark environment. Light leak is easily visible and uneven, as more light escapes around some keys than from others. This cheapens the laptop’s look and is a clear step behind the quality of a Lenovo ThinkPad or MacBook Pro.

However, the TravelMate’s touchpad is serviceable. It measures about four inches wide and two and a half inches deep, which is acceptably large. The surface feels too similar to the surrounding palm-rest and multi-touch gestures can be jerky, sometimes activating in starts and stops rather than a smooth motion. On the plus side, a pair of physical left/right buttons are included, and each offers significant travel as well as good tactile feel.

Our TravelMate review unit arrived with a 1080p non-touch display, an upgrade over the 1366 x 768 display found in the base model. The screen performed well in our tests, serving up 95 percent of the sRGB gamut while maintaining a contrast ratio of 680:1. Though these aren’t the best figures we’ve seen, they’re surprisingly good given the matte coating used by this Acer. Many other Ultrabooks with a non-gloss panel sacrifice contrast.

The high contrast ratio results in excellent subjective image quality, though dark images or movies can reveal back-light uniformity issues along the top and bottom edge. Still, the overall experience is impressive given the P645’s professional aspirations.

Sound quality is acceptable. Mid-range tones are easily muddled by bass, which can make dialogue hard to follow when it’s accompanied by dramatic music in a movie or game. Still, the built-in speakers will get the job done if you forget to pack headphones for a trip.

The P645 we tested came with an Intel Core i7-4500U processor, one of the more powerful dual-cores available for current Ultrabooks. This CPU led the TravelMate to a score of 45.43 GOPS in SiSoft Sandra’s Processor Arithmetic test and 8,419 MIPs in 7-Zip’s de-compression benchmark. Both scores are excellent; Lenovo’s ThinkPad T440s, which we reviewed with a Core i5-4200U, managed respective scores of just 38.5 and 6,888. The Asus Zenbook UX301L, which scored 54.17 and 9,806, is quicker – but it also sells for $750 more.

PCMark 8’s storage benchmark turned in a score of 3,625. That’s fast, but it’s also not as quick as many other systems that have an SSD. The T440s scored 4,945 in the same test, and the HP EliteBook Revolve scored 4,858. The TravelMate feels inadequately quick, however, and sacrificing a bit of performance for 256 gigabytes of storage (most Ultrabooks come standard with a 128GB SSD) is reasonable given the P645’s price.

While the base version of the TravelMate uses Intel integrated graphics, our review unit came with an AMD Radeon 8750M GPU. This led the system to a 3DMark Cloud Gate score of 5,700 and on to a score of 1,194 in the more demanding Fire Strike test. This easily defeats the ThinkPad T440s, which scored 3,861 and 440 respectively. In fact, this is the highest score we’ve seen from a 13-inch or 14-inch Ultrabook since we reviewed the Razer Blade. Many games will run well on this system, but the latest titles will still struggle beyond low or medium detail if played at the display’s native 1080p resolution.

The Acer TravelMate P645 weighs in at just 3.35 pounds, which is extremely light for a 14-inch system and less than either the Lenovo ThinkPad T440s or Apple MacBook Pro 13 with Retina. The system is a bit thicker than both, but its .8 inch girth isn’t exactly thick.

You could use the TravelMate every minute of an eight-hour workday and never run out of juice.

Battery life is strong too, coming in at almost 11 hours of light-load use and just over eight hours of web browsing time using the Peacekeeper benchmark. Both numbers exceed the T440s without its extended battery, which adds bulk and weight, and the latter figure is a new record among systems lacking an optional extended-life battery. You could use the P645 every minute of an eight-hour workday and never run out of juice.

Breaking out the watt-meter proved that light power consumption is partly responsible for this Acer’s long life. At idle, the system consumes no more than 10 watts with the display at maximum brightness, and turning brightness down to half reduces consumption to 7 watts, lower than the ThinkPad T440s or MacBook Pro 13 with Retina. Gaming can increase power draw to as much as 46 watts. However, Ultrabooks with Intel integrated graphics usually don’t exceed 30 watts.

We were surprised to see this Acer arrive with Windows 7 rather than Windows 8, though it makes sense given the lack of a touchscreen and the system’s focus on business. A few icons are installed on the desktop, but they’re harmless additions like Acer Registration or potentially useful tools like ProShield, a security manager designed for corporate customers. The only annoyance is McAfee Internet Security, which prompted us to purchase the company’s software several times.

At idle, the TravelMate’s fan is happy to take it easy. It creates little noise, yet external temperatures remain below 85 degrees Fahrenheit. That’s about on par with the ThinkPad T440s.

Acer’s new TravelMate does many things right. The chassis is well built and functional, the hardware is extremely quick, the battery seemingly lasts forever and the MSRP is reasonable. All of these factors should add up to the best business Ultrabook available today.

There’s just one problem; the keyboard. Its quality pales even when compared to consumer notebooks, and the back-light is so poorly implemented that it borders on useless. Fumbling the keyboard would normally be a minor issue, but it’s a notable oversight for a professional notebook, and one that some buyers won’t be able to forgive.

If you can get over that issue however, this Acer is superior to Lenovo’s ThinkPad T440s in the critical areas of performance, portability and value. HP’s EliteBooks don’t stand as chance, simply because they’re ludicrously expensive by comparison. You’d have to spend hundreds more on either the Lenovo or the HP to snag similar hardware.

Only the Apple MacBook Pro 13 with Retina is a better choice for business travelers, but the TravelMate’s more serious aesthetics, larger hard drive and Radeon graphics may make it stand out for certain buyers. Anyone with a mind for value should give Acer’s latest TravelMate a chance. They likely won’t be disappointed.

Topics
Best Apple Deals: Save on AirPods, iPads, MacBooks and more
Best Chromebook deals: Get a new laptop from $114
Best 17-inch Laptop Deals: Get a large laptop for $330
Best gaming laptop deals: Save on Alienware, Asus and more
HP 72 Hour Flash Sale: The 6 best laptop deals, from $250
Samsung’s first QD-OLED gaming monitor might be dead on arrival
Latest Dell sale sees must-have laptops starting from $380
Chrome’s take on Nvidia DLSS is set to launch, but you can’t use it yet
Lenovo Yoga 7i 2-in-1 laptop just got a $700 price cut
Google’s new Bard AI may be powerful enough to make ChatGPT worry — and it’s already here
Why you probably shouldn’t buy the $599 M2 Mac mini
Samsung’s 34-inch Ultra-WQHD monitor is $200 off right now
This HP gaming PC with an RTX 3080 is $700 off