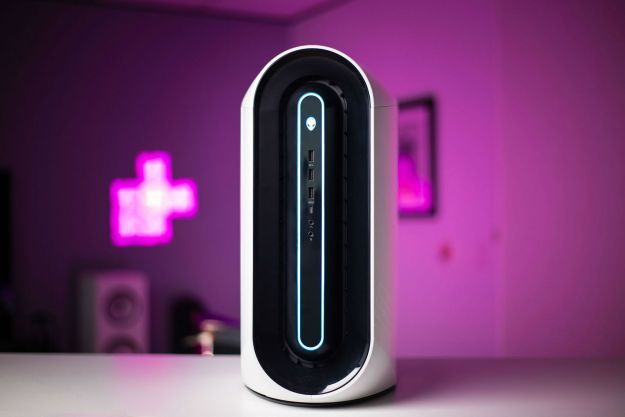 The tide is shifting. Just a few years ago, the premise of the new Aurora R10 would sound outrageous. A gaming PC without an Intel processor? An Alienware desktop without aggressive angles and with a white exterior?

None of that used to be Alienware’s vibe. The stereotypes have been thrown out the window, and the Aurora R10 is better for it.

Priced at $3,630 and pumped-up with a 16-core processor, this Ryzen-powered Aurora R10 will be overkill even for most gamers. That’s exactly what AMD and Alienware are going for.

AMD is sneaking its way into more and more systems, especially where it can flex its multi-core muscles. The new Ryzen 9 3950X sits at the top of the stack, and the Aurora R10 is of the first systems to use it.

It’s an incredible 16-core processor, the first of its type to appear in a “mainstream” gaming PC. If you thought the 12-core Ryzen 9 3900X was overkill, these four extra cores probably won’t do anything for you. But if you want the absolute fastest, or want to use your PC for some content creation or other CPU-heavy tasks, 16 cores might intrigue you. And it should.

I tested the processor at the heart of the new Aurora in benchmarks testing single core and multi-core performance. Both are important, especially when you consider the difference in load between CPU-heavy tasks and gaming performance.

In both Cinebench and Geekbench, the 3950X obviously leans towards multi-core brilliance. It runs circles around the Core i9-9900K, which has half the cores and threads. We tested the Core i9-9900K in the Digital Storm Aventum X, and the Ryzen 9 3950X beat it by 32%.

Single core performance is a different story. In both Geekbench 4 and Cinebench, the 9900K is around 3% faster. The 9900K has a maximum single-core frequency of 5GHz, while the Ryzen 9 3950X can’t wander north of 4.5GHz.

What’s all that mean? Well, it makes this Alienware one hell of a video editing machine. When it comes to gaming, raw single-core power is still a more important factor. That means the jump up to twelve cores — or in this case, 16 cores — won’t always produce better framerates.

Still, the Ryzen 9 chips are impressive. In the past, AMD has traded single-core performance for multi-core gains. That’s not actually the case here. The Ryzen 9 3950X is very nearly as quick as the Intel Core i9-9900K in single-core, and much quicker in multi-core, so you’re only gaining performance overall should you choose to make that upgrade.

Combined with the Nvidia RTX 2080 Ti for graphics, AMD’s Ryzen 9 3950X should guarantee the best framerates possible. Whether you want 60 FPS at or 150 FPS at 1080p, the Aurora R10 can do it all. The stand-out was Battlefield V, which handled on Ultra at a silky smooth 76 FPS. Even better, if you have a 1440p monitor with a high refresh rate, you can  play Assassin’s Creed Odyssey at Ultra High in . There, the Aurora R10 is unbeatable.

While its cooling is efficient, the Aurora R10 is loud. Despite how pretty it is, the loud fans will make you want to hide it under your desk.

The real question, though, is whether you’ll see a significant difference between this and an affordable alternative like the Ryzen 7 3700X. That eight-core processor should provide most of what you need to keep your graphics card from bottlenecking.

I wasn’t able to test different configurations in this system, but from what I’ve seen in other tests, the extra cores of the 3950X don’t add much value in terms of gaming. The gains in heavier tasks like video editing or 3D rendering are clear. For gaming, though, save yourself some money.

That’s why the option of mid-range Ryzen processors is more meaningful for AMD’s purposes. Most games still don’t benefit from larger core counts, making the standard six-core Ryzen 5 3500 a great starting place for a . AMD is competitive with Intel at a wide range of price points.

Alienware desktops are no stranger to unique design. The company has always wanted its products to be recognizable, even from a distance.

The Aurora R10 takes it a step further. The mid-size tower features the company’s new “Legend” design philosophy, meaning fewer harsh angles and aggressive vents. I’ve seen it (and loved it) in like the Area-51m and Alienware m15, but here, it’s even more pronounced. You’ll never mistake the Aurora R10 for another computer.

It’s more THX 1138 than Alien. Smooth edges, curved framing, and clean, white coloring mark the case, while the centerpiece is the ring of round light on the front. It resembles a light cycle from Tron, or maybe the interiors of the Death Star from the original Star Wars. Inside the LED wrap is a convenient selection of ports, including three USB-A 3.1 ports, a USB-C 3.1 port, and a headphone jack.

It’s a bold and ambitious look that works well in the form factor of a mid-range desktop. It is, however, all made of plastic. Systems like the HP Omen Obelisk and the Falcon Northwest Talon are made of aluminum and include a tempered glass side panel that gives you a peek into the internal components of your PC. The Aurora R10 takes a different route.

A desktop’s guts are every bit as important as the exterior. If you haven’t opened up one of Dell’s mid-size towers, you might be surprised when you try. It’s all done without the need of screwdrivers or other tools. The side panel is locked in place by two mechanisms and a simple pull lever.

Once the panel pops off, you still won’t have a clear view of your board and components. The Aurora R10 uses the arm-swing we’ve seen on previous mid-size Dell desktops. When closed, the power supply sits against the rest of the components to save space. But when you want to get in and see your system, it’s as easy as swinging out the hinge.

Unlike cheaper PCs that use this design, the cable management is immaculate. The routing is clean, and by moving the power supply, the layout of the internals feels spacious. Our unit featured liquid cooling, marked by the beautiful Alienware water block at the center. That’s not always the case with towers of this size. The extra space also allows for two expansion bays located below the Micro ATX board, making upgrades possible.

Getting in to replace a component such as the or shouldn’t be a problem. Having to swap out the power supply, though, could be a headache due to its placement.

The Aurora R10 is a showcase for AMD’s powerhouse Ryzen 3 processors. There’s no question about that, and it’s quite an achievement for AMD. This is a beast of a , even if the high-end options have more cores than most games know what to do with.

This desktop also puts the spotlight on what Alienware does best. Unique case designs that stand out from the crowd. It’s powerful, beautiful, and well-made.

HP’s Omen Obelisk is one solid competitor. The case is a bit more conventional, and offers a beautiful look at your PC through tempered glass. However, it doesn’t currently offer up-to-date, high-end components from AMD, Intel, and Nvidia like the Aurora R10 does.

Another good option is a custom-built, mid-size tower like the Origin Neuron or Falcon Northwest Talon. These have simple designs with plenty of customization options, but will cost a bit more for similar performance.

People buy desktops for their longevity. You shouldn’t have a problem keeping around the Aurora R10 for many, many years. With up-to-date components, great build quality, and fairly simple upgradability, the Aurora R10 should last through at least a few hardware cycles. The warranty is only good for one year, however.

Yes. The Aurora R10 is a powerful with an iconic design — just make sure to opt for a processor choice that fits your needs.

Topics
The best PC power supply for 2023
The first RTX 4080 laptops are much cheaper than we expected
Best HP laptop deals: HP Envy, HP Spectre x360, and more
Tested: Is Discord really slowing down Nvidia GPUs?
The Galaxy Book 3 Ultra is Samsung’s most powerful laptop ever
Nvidia may have another monster GPU in the works, and the price could be outrageous
AMD’s Ryzen 9 7950X3D pricing keeps the pressure on Intel
What is ChatGPT Plus? Everything we know about the premium tier
ChatGPT Plus to bring priority access during peak times — at a hefty price
Usually $3,879, this Lenovo laptop is down to $1,479 today
Get this Asus gaming laptop with an RTX 3060 while it’s $400 off
All of Samsung’s videos from today’s Galaxy Unpacked event
Best 2-in-1 laptop deals: Save on Dell, Lenovo, HP and more