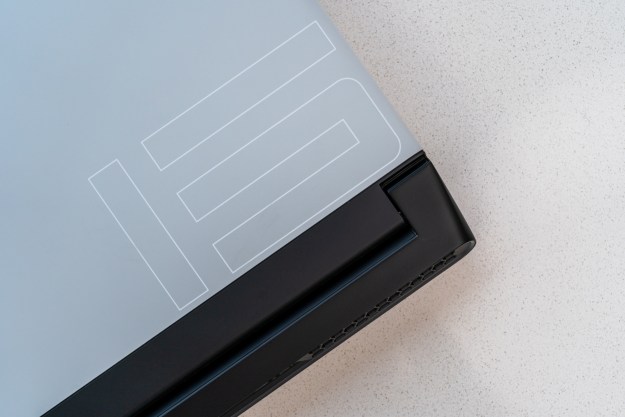 “Alienware's m15 is a gaming laptop you'll lust after, and you should indulge.”

I was quick to grab the Alienware m15 when it came into the Digital Trends office. It’s a laptop I’ve been waiting to test. Maybe even my most anticipated laptop all year.

Why? Because it packs the design of Alienware’s gorgeous Area-51M in a far more practical 15-inch chassis that weighs just 4.75 pounds. The Area-51M was a looker, but it wasn’t a laptop built for most people.

The Alienware m15, though? This one’s for you. For me. For everyone. It’s not exaggeration to say Alienware m15 is, and has long been, the Ford F-150 of mobile PC gaming. It’s one of the best gaming laptops out there. Want to game, but also need modest portability? It’s the default choice. Now, it’s also a looker.

Everything about the new m15 is, well, new – but I think the rear light bar, which loops entirely outside the laptop’s rear silhouette, is the highlight. It’s bright and futuristic, yet not gaudy or overbearing. This is the most attractive accent lighting on any laptop, ever. Seriously. It’s stunning.

The rest of the laptop is great, too. It abandons the hard edges so common in gaming laptops for a softer, rounded look that recalls the aesthetic of recent sci-fi films. Color path options include black “Dark Side of the Moon,” or white “Lunar Light,” making it clear that connection is no accident.

Looks aren’t everything, of course, but the Alienware m15’s exceptional design is an advantage. You’ll feel proud hold it in your hands.

Don’t be fooled. While the Alienware m15 looks modern, it’s not the most portable machine. This is a 15-inch gaming laptop that can handle Intel’s Core i7 9th-gen processors and Nvidia GeForce RTX 2080 Max-Q graphics. That means it has some heft.

Its weight of 4.75 pounds is mid-pack. Razer’s Blade 15 can weigh as little as 4.5 pounds, while Acer’s Predator Triton 500 weighs in at 4.41 pounds. The Alienware m15 isn’t a brick, but you can find lighter options. It’s a hair more than 7/10ths of an inch thick, which is right on par with the competition.

Numbers don’t tell the whole story, however. The Alienware m15 is all-new, but it retains the “junk in the trunk” design of earlier Alienware laptops. Seriously. The display hinge is pushed forward from the laptop’s rear, which juts another inch beyond it.

In other words, the m15 is closer to square than most gaming laptops. That can make it an awkward fit in a laptop bag, even one designed with 15-inch laptops in mind.

Unfortunately, the square shape doesn’t include room for a great touchpad. It’s not all that small, but it seems tiny on the m15’s otherwise large body. I had better luck with the keyboard. The layout is spacious, and keys respond with firm tactile feedback.

My god. It’s full of ports

You may curse the Alienware m15’s old-school size when stuffing it in a bag, but you’ll love it when you have to plug in. This thing is stuffed with ports. Take a deep breath. Okay. Ready?

It has a proprietary power jack, an Ethernet port, two USB-A 3.1 Gen 1 ports, one USB-A USB 3.1 Gen 1 port with PowerShare, one Thunderbolt 3 port, one Alienware Graphics Amplifier port, one HDMI 2.0b out, one Mini-DisplayPort 1.4, one combo headphone/microphone jack, and one lock slot.

That’s a lot. And it gets better. Many ports are on the rear of the laptop, making cable management easy. Just connect accessories to the rear, slap on a Velcro tie, and you’re done.

And don’t forget. The light bar is at the rear, too. Plugging in a peripheral is a great excuse to remind yourself how awesome this laptop looks.

Eventually, you might stop gawking at the Alienware m15 and decide to play games on it. That means shifting your attention to the screen. It’s not as enthralling as the laptop’s design, though only because Alienware has (mostly) chosen practicality over specs.

There are four panels on offer, three of which are 1080p. That might seem strange given the modern obsession with resolution (phones typically have a more pixels than this laptop), but it makes sense. 1080p looks sharp on a 15.6-inch display, and it’s a better fit for the capabilities of modern gaming laptops. I don’t know about you, but I’ll choose maximum detail at 1080p over medium detail at 4K any day of the week.

Instead of upping resolution, the optional panels increase refresh rate. The entry-level choice is a standard 60Hz display. You can upgrade from there to a 144Hz or even 240Hz refresh rate, which is what my review unit had. The upgrade panels also include Tobii eye tracking technology but, to my dismay, it doesn’t support Windows Hello facial login.

I enjoyed the 240Hz panel both in and out of games. In addition to its smooth refresh rate, it delivered sharp images with contrast and color accuracy that can keep up with anything besides OLED which, because of its far deeper black levels, can crush any conventional LCD. The 240Hz panel’s solid quality is worth your attention. In the past, I’ve tested laptops with high refresh rates and disappointing image quality. You don’t have to make that compromise here.

And wow, this display is fluid. I noticed that most in Battlefield V, a game that pairs excellent art direction with fast-paced action. The game’s vibrant explosions and heavy use of post-process effects can make any judder, stutter, or unintended blur obvious, but all was crystal clear on the Alienware m15’s 240Hz panel.

I’m still not sure the difference between it and a 144Hz screen is discernible, so don’t feel bad if you “only” opt for that lower but still spectacular refresh rate. In fact, the 144Hz option is likely the better match for performance – as I’ll discuss more later. When compared to a 60Hz OLED screen, however, the difference is tangible.

Remember that a high refresh rate is only useful if you can obtain it. A demanding game, like Assassin’s Creed Odyssey, will never come close to 240 or even 144 frames per second.

In those cases, you might want to opt for maximum image quality. That’s where the optional 4K OLED panel comes in. I didn’t have chance to test it on the Alienware m15, but OLED panels have universally scored well in our display benchmarks. They achieve contrast ratio and color gamut figures high-refresh IPS displays just can’t match. The only downside is price, as the OLED is a $330 upgrade from the base screen. That’s $150 more than the 240Hz screen I reviewed.

All the framerate you need

My upgraded unit represents the cutting edge of mobile gaming. You’ll only find better results from laptops like the Alienware Area-51M, which actually packs a full-fat Nvidia RTX 2080 graphics chip.

That means 60 frames per second is easily obtainable at 1080p and maximum detail. I found that was true for Fortnite, Battlefield V, and Civilization VI. Only Assassin’s Creed Odyssey, a notoriously strenuous game at maximum detail, dipped below 60 FPS. Even then, the Alienware m15 average 55 FPS.

These results are on par with the competition. Across these four games, I found the Alienware m15 was quicker than HP’s Omen X 2S, about on par with Razer’s Blade 15, and a bit slower than Acer’s Predator Triton 500 (all were tested with RTX 2080 Max-Q graphics).

There’s a sliver of me that’s disappointed by this result. That has to do with the Alienware M15’s size. It’s on the larger side, so I hoped that might be better performance due to improved thermals.

Still, its performance is respectable, and the gap between all the laptops we’ve tested with RTX 2080 Max-Q is small enough that it doesn’t make-or-break gameplay. The HP Omen X 2S averaged 52 FPS in Assassin’s Creed Odyssey at 1080p and maximum detail. The Alienware m15 averaged 55. You won’t notice that gap.

But what about that 240Hz screen? Can the Alienware m15 use it to its full potential?

No. It can’t. Fortnite, the least demanding game in my tests, averaged 149 frames per second at 1080p and medium detail. That’s nowhere near the 240Hz panel’s full potential.

My suggestion? Save your cash and stick with the 144Hz panel. It’s the best fit for the laptop’s performance in modern games, and you’ll save $180 dollars by ditching the 240Hz upgrade.

You’re going to want to show the Alienware m15 off. There’s no doubt about it. Unfortunately, you’ll have to be choosey with the humblebrag tour, because this laptop’s battery life kind of sucks.

That comes as no surprise. Gaming laptops have picked better display quality and higher refresh rates over long battery life in recent years. It’s a trade-off that makes sense. Gamers don’t expect to spend much time away from a power outlet.

The Alienware m15 managed just three hours in our web browsing battery test. The more demanding Basemark browser benchmark, meanwhile, ate through a charge in just an hour and a half.

If it’s any consolation, these results aren’t bad for the segment. A high-end gaming laptop with a high refresh rate display is lucky to hit three hours. This is true for the Razer Blade 15, HP Omen X 2S, and Acer Predator Triton 500. It just comes with the territory.

Still, you’ll need to keep the charger handy. And that adds to the laptop’s bulk when traveling.

The Alienware m15 is a truly impressive laptop. It has a wholly original and unique design that delivers the gosh-wow factor a gamer craves but doesn’t look or feel gaudy. I don’t have a mantel, but if I did, I’d put the m15 on it.

Alienware backs up the looks with solid performance, a wide range of attractive displays, and plenty of ports. The only downside is the laptop’s size, which is bulky next to the best competition.

Don’t let that stop you, though. If you want a gaming laptop that looks awesome even when it’s off, you’ve found it.

Yes. The Razer Blade 15 remains our overall favorite, even if it’s not as attractive. The Blade 15 has a killer combination of portability and performance. It feels less like a gaming laptop, and more like a great laptop that can also game. To decide for yourself, you can check our in-depth comparison of the Alienware m15 and Razer Blade 15.

Acer’s Predator Trition 500 is a good pick if you value, well, value. It delivers excellent hardware in several affordable configurations. It’s not as attractive as the Alienware m15, however.

Alienware offers the usual one-year warranty. This isn’t the most robust laptop I’ve felt, but it seems sturdy enough to handle everyday use for a long time to come. I expect it’ll last at least five years. It could last a decade if handled with care.

Yes. The Alienware m15 is a stunning gaming laptop with excellent performance.

If you’re hoping to score discounts, be sure to take a look at the best laptop deals and gaming laptop deals we spotted today.