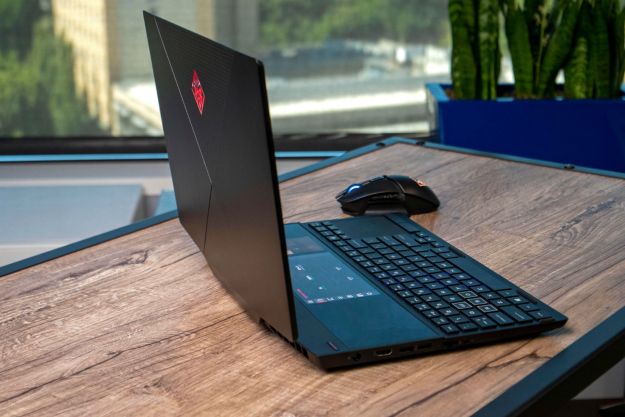 “HP's Omen X 2S is a bold experiment, but falls short of revolution.”

Gaming laptops are getting nutty. Because of how powerful and portable they’ve become, it takes more than smooth framerates to stand out from the crowd. The HP Omen X 2S takes an extraordinary step to make gamers give it a look. It has a small, second screen built right into the keyboard deck.

It’s a neat trick, but HP wants the Omen X 2S to be more than just a gimmick. It’s also a powerful flagship gaming laptop built to stand toe-to-toe with the best from Alienware and Razer. At $2,540, it comes with a six-core Core i7 processor, an Nvidia RTX 2080 Max-Q graphics chip, and 16GB of RAM. You can even choose an eight-core Core i9 if you want to get crazy.

So, is the second screen useful? Or are you better off with a more traditional gaming laptop?

Two screens on a laptop. Why not?

The Omen X 2S is unlike any gaming laptop I’ve ever used. Yes, it’s still black, RGB-laden, and heavier than your average laptop. But when the empty space between the keyboard and the hinge lights up as a second display, I can’t help but want to play with it.

That second screen is a 6-inch, 1080p touchscreen — just about the size of a smartphone. You might wish it was wider to fill the blank space on either side, but there’s a reason for the size. The idea of the laptop came from some research that showed just how often people used their phones while gaming. They play music, listen to podcasts, text, check social media, and watch videos. That’s why HP decided to build a smartphone-sized screen right into the keyboard deck.

The screen’s default app is the HP Omen Command Center, which gives you quick access to things like system vitals and lighting customization. But from there, you can drag any window down to the second screen, or open any application you want to run, as if it was an external monitor. It’s just a quick reach to select a new song on Spotify or scroll down on a guide you’re reading as you make your way through a game.

HP even includes a few helpful macro buttons above the touchpad that add extra functionality. One will swap the apps between the main screen and the second screen, and another will turn the screen off entirely.

I can’t see many benefits to having a screen built into the keyboard where this one is.

The problem, of course, is the screen isn’t a smartphone. You don’t have access to the same apps as your phone, and when you do, they’re comically small. There are even problems with the touch capabilities of the screen. When a game is open, the system automatically turns off touch controls, and they can’t be flipped back on. This isn’t a problem with other applications, but for DirectX games, it’s off limits.

You can work around this by placing a game in Windowed mode. That works well in some titles, but others suffer performance penalties or interface oddities in that mode.

I also had issues with the placement of the second screen. Because it lays flat across the keyboard deck, it’s not ideal for activities like watching videos. The off-axis angles aren’t great, which meant I had to lean over to have a better view. Then there’s the problem of glare. Even though the screen is matte, bright images cast reflections across the bottom screen. As I type this review, the blinding white screen of Google Docs is washing out the second screen with glare.

Having a second screen is still useful, though. HP even includes one game-specific trick, where you can mirror a portion of your main screen. I tried it out in Civilization VI, cropping out the mini-map onto the second screen, almost like playing on a Nintendo DS. The use cases are definitely limited, but for the right gamer, it could be a nice addition.

Even beyond that, extra screen space is always great (especially if you’re on the go or away from your desk). Still, I can’t see many benefits of having that screen just above the keyboard. I still found myself picking up my phone.

The second screen of the Omen X 2S might be the more exciting of the two, but the regular display is the one you’ll be playing games on. It’s a 15.6-inch 1080p screen with a 144Hz refresh rate, though you can also opt for a 4K model at 60Hz. The screen is mid-pack in image quality.  Its certainly not the brightest or most colorful laptop screen I’ve seen, but for a gaming laptop, it gets the job done. The top and bottom bezels are rather chunky, though, making this otherwise futuristic laptop feel a little old-school.

Not a normal laptop

Having a second screen doesn’t come without some sacrifices. To make room for it, the touchpad and keyboard have been shifted down to the bottom of the deck, and are now side-by-side. For gaming, you’ll be plugging in a mouse anyways. But when it comes to using it as an actual laptop, the lack of wrist rests and the cramped layout make for an uncomfortable typing experience.

The keyboard is backlit with per-key, RGB lighting, though it’s brightness control is limited to on or off. That’s not a huge deal, though compared to what you get on similarly-priced gaming laptops, it’s lacking. Once you jump into the Omen Command Center, you can customize the lighting to suit your fancy, of course, though you’ll have to stumble through HP’s limiting software.

The touchpad sits to the right of the keyboard, and it isn’t great. It’s responsive enough, and supports Windows Precision drivers, though the plastic surface isn’t as smooth as glass touchpads. The taller shape of the touchpad takes some time to get used to. The separate left and right buttons are tactile with plenty of travel.

At 0.8 inches thick, it’s only a hair thicker than the Razer Blade.

The speakers are located on the angled edges of the bottom of the laptop. I prefer speakers to be front-firing like the Razer Blade or MacBook Pro, as they often result in crisp audio. They can be loud, though bass is still lacking when listening to music.

An aluminum exterior ensures the Omen X 2S feels premium to the touch. That’s not to say there’s no give or flex, but it’s a robust chassis. The Omen X 2S is also surprisingly thin. At 0.8 inches thick, it’s only a hair thicker than the Razer Blade. It is, however, a half pound heavier at 5.2 pounds.

HP didn’t skimp on the port selection. You get three USB-A, a USB-C Thunderbolt 3, HDMI, and an RJ-45 Ethernet jack. That’s fairly standard for gaming laptops these days, and it’s what I like to see.

Performance beyond a mere gimmick

The Omen X 2S can be configured with up to an eight-core Intel Core i9 processor, which just happens to be the most powerful processor you can put in a laptop like this. For gamers, which is exclusively who this laptop is for, those two extra cores are a bit overkill. My review unit had the Core i7-9750H, a six-core 9th-gen processor with plenty of muscle, which is a better choice. It also came with 16GB of dual-channel RAM, more than enough for the most demanding games.

To compliment those components, the Omen X 2S can be configured with up to an RTX 2080 Max-Q graphics card. Far from merely a gimmick, the Omen X 2S proved itself to be a solid performer in our tests and benchmarks.

I ran the Omen X 2S through our typical suite of test games, which includes processor-heavy games like Civilization VI, as well as GPU-straining titles like Assassin’s Creed Odyssey. Throughout them all, the Omen X 2S performed admirably. Sticking with the screen’s 1080p resolution, most games could easily put to use the full 144Hz refresh rate, especially fast-paced games like Fortnite. You’re sailing at well over 100 FPS, even with settings at Epic.

You’re sailing at well over 100 FPS in Fornite.

The Omen beat the Razer Blade in every scenario, ranging from 1080p with dropped settings all the way up to 4K at the highest. Impressively, it even went toe-to-toe with larger 17-inch laptops like Razer Blade Pro or MSI GS75 Stealth.

The only game the Omen struggled with a bit was Battlefield V, where it was around 20% behind the Razer Blade for some reason. The game was still beautifully smooth in 1080p with a framerate of over 70 FPS, but higher resolutions weren’t as playable.

Now, there are are better-cooled laptops out there that produce better framerates — such as the Predator Triton 500. Laptops like it also include G-Sync, which the Omen lacks. But in general, I was impressed by how games played on the Omen X 2S.

I was, however, a bit disappointed by battery life. Thanks to that second screen, the Omen burns through its 72 watt-hour battery in just hours and 20 minutes on video loop with the second screen turned off. That’s bad, especially for a gaming laptop without G-Sync. If you’re using it for general productivity, you can’t expect more than two to three hours, depending on how hard you’re taxing the system and what you’re doing with that second screen.

The HP Omen X 2S has to be commended for its risk-taking. It won’t be the last gaming laptop with a second screen, that’s for sure. However, the idea still needs refinement. There will always be early adopters that are willing to pay for the first generation, but for most people, it’s not

If you’re interested in a second screen, the HP Omen X 2S is the only gaming laptop of its kind. If you’re less of a gamer, you could opt for the Asus ZenBook Pro Duo, a laptop with a wider, edge-to-edge second screen that seems a bit more useful for content creators.

As for 15-inch gaming laptops, you’ll find plenty of good options, ranging from high-end premium laptops like the Razer Blade to the Acer Predator Triton 500.

The Omen X 2S is a solid, well-built gaming laptop. That’s for sure. The components are up-to-date too, meaning you won’t feel the need for an update for at least three or four years. The standard one-year warranty is nothing to brag about, but it’s commonplace for laptops of this type.

No. The second screen is a fun idea, but for most people, it’s not useful enough to be worth the extra cost.

Best gaming laptop deals for September 2022
Best laptop deals: Get a portable workhorse from $119 today
The best keyboards for 2022
The best wireless keyboards for 2022
How Nvidia’s DLSS 3 works (and why AMD FSR can’t catch up for now)
HP Spectre x360 13.5 vs. Dell XPS 13 Plus: flagship battle
Nvidia’s DLSS 3 could make the monstrous RTX 4090 a little less power hungry
You can now downvote comments on TikTok videos
Dell XPS 13, 15, and 17 laptops are all on sale today — save hundreds!
We can’t believe how big this HP Spectre x360 2-in-1 laptop’s discount is
Why gamers should avoid the Windows 11 2022 update
EVGA’s feud with Nvidia gives new options to GPU makers
Hurry! This Alienware gaming laptop deal cuts over $1,000 off the price