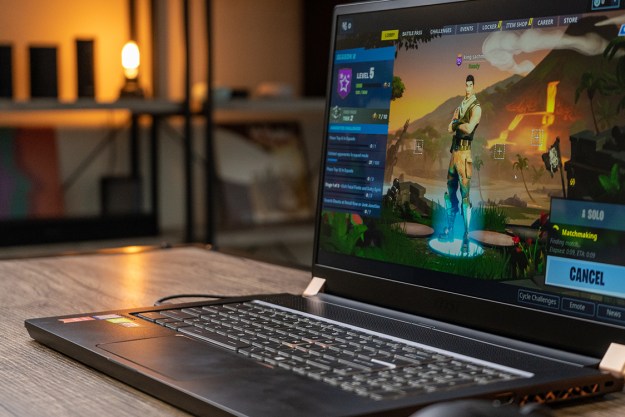 “The MSI GS75 Stealth is the epitome of a powerful, portable gaming laptop.”

MSI struck gold with last year’s GS65 Stealth. It had it all. Trimmed bezels, an unbelievably thin chassis, a 144Hz screen, and impressive gaming performance.

MSI has brought that same design up to the 17-inch size with the GS75 Stealth. Along with that larger size is updated components like Nvidia RTX 2080 Max-Q graphics and three storage expansion slots. It starts at $2,099, but our configuration maxed out at $3,000. That’s not cheap, and now that competing gaming laptops have also thinned out, does MSI’s design still have the magic?

The MSI GS75 keeps the same style as last year’s 15-inch model. It isn’t flashy, but it is distinctive. Simplicity is the name of the game. The top is just a solid, smooth black panel, accented by MSI’s dragon logo. There are frills, no lights, just straight edges and gold trim along the hinges, the outline of the touchpad, and the hallmark vents along the sides. It’s even the defaulted color of the RGB keyboard. All this gold might not be enough to make the laptop feel luxurious, but it’s nice change from all the red, blue, and green LEDs in the gaming world.

Though it’s mostly plastic, the GS75 feels solid. It’s not on the level of an aluminum laptop like the Razer Blade, but it’s not flimsy either. There’s a bit of flex in the lid, as well as the hinge, but unless you’re heaving on it, you wouldn’t notice. The laptop opens with one finger, and even has a small lip to pull it open. The hinge does close a bit prematurely, however. Once you get it 75 percent closed, it slams shut, which led to more than a few accidental shutdowns.

The size of the GS75 is one of its biggest strengths.

The size of the GS75 is one of its biggest strengths. It weighs just under five pounds and is only 0.7 pounds heavier  than the 15-inch model. That’s a whole pound lighter than the ROG Zephyrus S GX701 and 17-inch Lenovo Legion Y740. Meanwhile, it’s just a sliver thicker than the Razer Blade and Asus ROG Zephyrus S at 0.75 inches, and a solid 0.15 inches thinner than the Legion Y740. The MSI has stiff competition in the area of portability, but it’s still among the most mobile gaming setups you can buy.

MSI has thrown in almost every port imaginable. That includes a USB-A 3.0 port, an ethernet jack, headphone, separate 3.5mm mic jack, barrel plug for power, and even a mini-SD card slot. Video outputs come in the form of HDMI and USB-C Thunderbolt 3. Also included are two additional USB-A ports and a USB-C 3.0 port. That’s a fantastic selection, providing all the spots for peripherals you could ever need. It might not look all that clean, but that’s the price you pay to live a dongle-free life.

No place for palms

The keyboard layout, which includes a number pad, is spacious. Included are full-sized arrow keys, a column of macros keys to the left, and comfortable spacing across the board. There’s also more key travel here than your average keyboard, making for long, satisfying keypresses.

It’s comfortable, too, though a few changes can throw you off. The Windows key is shrunk and moved to the right side, which gives extra space for an enlarged left-side Control key. MSI has also sliced off part of the right Shift key to make room for a full-sized set of arrow keys, which is always appreciated. The arrow keys also intrude upon the number pad, which pushes the 0 key in the center. It’s a abnormal for a tenkey setup, but it’s a good compromise for gaming.

The location of the touchpad is the biggest hindrance to the typing experience. Rather than centering it with the keyboard as most manufacturers do, MSI left it dead-center. While that looks more symmetrical, it means your right hand is constantly resting on the touchpad while you type. That makes accidental clicks and cursor moves hard to avoid. It’s made worse by the touchpad’s extra-wide dimensions. You’ll rarely hear me complaining about a touchpad being too large, but here, it’s at the detriment of the typing experience.

Keyboard backlighting is standard. It’s powered by SteelSeries and is lit per key, which means you’ll have a virtually unlimited number of combinations to customize. I prefer the more restrained look of the Razer Blade’s lighting, but the MSI is even and bright.

A display that defies stereotypes

Gaming laptops used to be saddled with poor displays, but that’s changed over the last few years. The GS75 Stealth has an excellent screen — fast and responsive for games, with good contrast and colors for everything else. Like a lot of high-end gaming laptops in 2019, the GS75 has a 1080p 144Hz panel, meaning the screen handle framerates up to 144 FPS (frames per second) without screen tearing or artifacts. It’s smooth and beautiful.

The GS75’s image quality is right line with its competitors, which means it’s fantastic for what it’s meant to be used for. The screen’s brightness goes up to 345 nits, which is plenty bright for the non-reflective matte display. Colors are vivid yet accurate, and the narrow border around the screen removes any distractions from your gaming. It’s not as accurate as a MacBook Pro, but it’s reliable enough to do some video or photo editing on. That’s important, as a laptop like the GS75 might be an attractive choice for content creators, who just happens to be gamer.

The same can’t be said about the speakers. They’re located along the forward corner edges and are plenty loud, but sound awfully tinny. Bass is completely absent, and everything sounds like it’s being played through a filter. You’ll find better speakers on everything from the Razer Blade to the Legion Y740.

Six cores at its disposal

The MSI GS75 Stealth comes with the latest six-core Intel processor that gaming laptops and high-end productivity machines have used for the past year or so. It’s an extremely capable CPU, especially when matched with 32GB of RAM, which our unit came with (though that much RAM is definitely overkill).

In Geekbench, there’s not a noticeable difference between the GS75 and some other popular gaming options, whether it’s in single core or multi core performance. To see how it did in a real-life scenario, we also encoded a 4K movie trailer from H.264 to H.265. The GS75 finished the task in 2 minutes and 28 seconds, which is 10 seconds slower than the Zephyrus and 7 seconds faster than the Predator Triton 500.

Our review unit came with 512GB of M.2 SSD storage from Western Digital, which proved to have some super-quick write and read speeds. Storage is accessible once the back cover and fourteen screws are removed. Unlike most gaming laptops, the GS75 Stealth includes an extra M.2 SSD slot, which comes empty. It’s a nice touch for those that appreciate some extra expansion room in the future.

A gaming rockstar that stays cool under pressure

We weren’t surprised to see the GS75 Stealth is a strong performer in the graphics department. It comes equipped with the RTX 2080 Max-Q, the most powerful mobile graphics card you can find. How a laptop handles a card will always be different, so we ran the system through 3DMark Time Spy to start.

The GS75 Stealth isn’t at the front of the pack. The extra cooling and larger chassis of the ROG Zephyrus S produces a 14 percent increase in Time Spy. In fact, the MSI is even a tiny bit behind the Acer Predator Triton 500, which squeezes the 2080 Max-Q into a smaller 15-inch chassis. When we headed to play some actual games with the GS75, we saw very similar results across the board.

Using the system’s 1080p screen, we pushed graphics settings to max in almost every game and saw framerates that could take advantage of the high refresh screen. We’re talking 129 FPS (frames per second) in Fortnite, 97 FPS in Battlefield V, and 122 FPS in Civilization VI.

Those are impressive numbers compared to previous generations of gaming laptops, but they’re right in line with competitors from Asus, Acer, Lenovo, and Razer. The ROG Zephyrus S is once again at the head of the pack, while the RTX 2070 machines we’ve tested are at the back. The GS75 is right in the middle. Its performance is most closely matched to the Acer Predator Triton 500, which is a 15-inch laptop with an Nvidia RTX 2080 Max-Q, which means the extra chassis space isn’t affording the GS75 much advantage.

That said, the thermals here are still solid. MSI has thrown in an extra fan and seven heatpipes for good measure. That doesn’t result in better performance, but it does keep both surface and internal temperatures surprisingly low. It’s a very comfortable gaming experience, especially on the keyboard and palmrests, which never felt overly warm. It also means a longer shelf life for the internal CPU and GPU, which aren’t constantly being overheated.

And we did put it through its paces. By plugging into a large 1440p and 4K monitor, we wanted to know how it could handle higher resolutions. At 4K, most the games in our test suite were smooth and playable, landing around or just below 60 FPS. The one exception is Assassin’s Creed Odyssey, which remains far too demanding for high resolutions on a laptop. You’ll want to stick to 1080p there.

No G-Sync, but decent battery life

A lot of laptops in 2019 are moving to G-Sync screens, which often bars systems from using Nvidia Optimus to switch between the discrete graphics and dedicated graphics. While G-Sync has its benefits, the result is horrible battery life. The MSI GS75 Stealth avoids the matter, which lets the system earn a win there.

While the difference in battery life in an intense test like Basemark is less significant, our lighter tests are where the GS75 takes the lead. It’s around twice as long as the Lenovo Legion Y740 17, with 6 hours and 51 minutes in local video playback and 5 hours and 45 minutes in web browsing. Compared to a standard 15-inch laptop like the Dell XPS 15, that’s a disappointment. It won’t last you through a full workday. But for a gaming laptop, it’s one of the best performers out there, neck-and-neck with the Razer Blade (if you buy it without the optional G-Sync screen).

MSI’s thin-and-light design doesn’t stand out quite as much as it did in the past. But that doesn’t mean the GS75 Stealth fails on its promise. With good battery life, an impressive screen, and great gaming performance, it still has certain strengths over its competitors. It’s on the higher end of the pricing scale, though it still offers an alternative to the spendiest machines from Razer.

MSI offers a smaller, 15-inch version, the MSI GS65 Stealth. The smaller size and more affordable price make it an attractive option. We still think the Razer Blade has the best balance of gaming capabilities, but it’s also one of the most expensive gaming laptops you can buy.

If you’re set on a larger screen, the GS75 is one of your better options. The Legion Y740 17, though, is a good alternative. It’s quite a bit larger and heavier, though it’s as powerful and a bit more affordable.

The MSI GS75 Stealth is futureproof, and its specs are up-to-date. The build quality, however, may make hold the device with a bit more caution. It comes with a standard one-year warranty for repairs.

Yes. The MSI GS75 Stealth has a few flaws, but it’s thin, portable, and plenty powerful for even the most hardcore gamers.