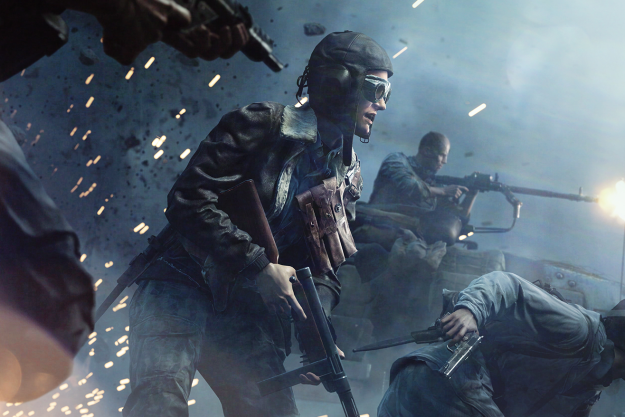 “‘Battlefield V’ struggles to pass the high bar set by its predecessor.”

Battlefield 1 helped reestablish the DICE shooter franchise as the king of large-scale combat, with its multi-day Grand Operations mode and emotional single-player War Stories offering experiences you couldn’t get anywhere else. It’s unsurprising that the studio and publisher Electronic Arts opted to take a similar approach with Battlefield V, which moves the action back to World War II for the first time in years. Battlefield V still has much of what made its predecessor great, but its rough edges are pretty hard to ignore.

EA chose to tout Battlefield V’s single-player campaign as a major advantage over competitor Call of Duty: Black Ops 4 in the months leading up to release, but what’s available in the final game is a decidedly mixed bag. Split into individual War Stories telling lesser-known (or made up) tales from World War II, the mode puts us in the shoes of three very different heroes, plus a short prologue mission similar to the beginning of Battlefield 1. A British bank robber is sent on a near-suicide mission Dirty Dozen style, a Norwegian freedom fighter uncovers Nazi research secrets, and a colonial Senegalese soldier fighting in the French army helps to liberate a country he doesn’t know. It’s a refreshing change from the Stalingrad and Normandy settings we typically see in World War II shooters, but DICE’s execution doesn’t always live up to its exciting ambition.

The first of the War Stories you’re likely to complete is Under No Flag, set in North Africa and starring a smart-mouthed young British criminal who sounds like he was plucked out of a Guy Ritchie movie. The setup is quite simple, tasking you with going from objective to objective and destroying targets, occasionally allowing you to choose the order. There’s relatively little banter or surprise over the course of the hour or so it will take you to complete the whole thing.

DICE’s execution doesn’t always live up to its exciting ambition.

Under No Flag features some very high difficulty spikes not seen in the other two War Stories, but more frustrating than the enemies were the number of bugs and glitches that weren’t ironed out before release. Enemies flip and flail long after being killed. Rocks load on the ground mere feet from your location. If you pause the game for more than a few seconds and then resume, your game will hitch like you’re experiencing some sort of offline lag. None of it is enough to completely ruin the experience, but it’s pretty evident that the fourth campaign mission was held back because some more bugs need to be squashed.

Fortunately, the other two War Stories fare much better, both in their structure and in their storytelling. In Nordlys, we’re put in the boots of a young resistance fighter and her mother as they attempt to destroy the Nazis’ heavy water supply and prevent the creation of a functional atomic bomb that would change the course of the war. Though it’s fiction and the game even mentions that the mission was actually conducted in a bloodless raid (the last member of which died last month), it’s a harrowing and gripping series of missions, culminating in some fantastic set-pieces near the end.

Tirailleur also impresses, truly living up to the “untold stories” promise by starring a team of Senegalese soldiers attempting to liberate France from German rule, despite having essentially no real ties to the country. By showing their heroism and bravery, we’re given a chance to see fighters who were not celebrated or even known to the general public. In a political and effective piece of storytelling, we even see the Senegalese soldiers posing for a picture with their French comrades, only for the black soldiers to fade away as if they were never there.

Battlefield V delivers over-the-top action, albeit with a distinct lack of polish.

War Stories is ultimately supposed to be the appetizer to the multiplayer main course in Battlefield V, but it’s hard to shake the feeling that it was cobbled together pretty quickly. Only including three missions at launch makes it feel incomplete, and if the German-focused fourth episode is as long as the original three, we’ll still be left with a campaign that takes maybe four hours to complete from start to finish. The stories we have are certainly more memorable than the typical World War II campaign, but we have to say goodbye to characters just as we’re getting to know them.

Battlefield has lived and died by its multiplayer more than any other shooter on the market, and Battlefield V delivers the over-the-top action we’ve come to expect from the series, albeit with a distinct lack of polish. Once again, Conquest mode is the star of the show, with several different objectives scattered across enormous maps for teams to capture, and the basic gameplay loop works as well as it ever has in the series.

Tanks and half-tracks speed across deserts and fields, planes dive down for targeted strikes, and infantry charge forward against screaming gunfire. The map design is among the best DICE has ever done, with locations from bombed-out cities to snowy mountaintops. These diverse locales occasionally see dynamic weather events as well, requiring players to change their strategy. In one instance, we found ourselves unable to snipe after a huge snowstorm came in, forcing us to get up close and personal with another weapon.

If you’ve played Battlefield 1, you know what to expect. Battlefield V has almost identical controls and bullet drop that’s inconsequential enough for newcomers to succeed, but a few changes have been made that help to mix up the formula and keep the momentum going. The Attrition system provides your team with health and ammunition stations after capturing objectives, meaning you’ll rarely have to steal another soldier’s weapon in order to stay in the battle. Fortifications also give you the ability to build defensive structures at key points, making your position less vulnerable to enemy fire. In some cases, this could mean boarding up a window, or building a sandbag pile that gives your sniper the perfect nest.

These tweaks provide more flavor to the Battlefield formula than drastically alter it, and this is also true of the many multiplayer modes. Frontlines is a massive reverse tug-of-war match, where teams throw everything they have at single objectives as they move toward their enemy’s base. Breakthrough is similarly hectic but with an emphasis on planning and defensive positioning.

A few options, such as Airborne, are only available as part of the multi-stage Grand Operations mode, which returns from Battlefield 1. Over several maps and modes, your team must complete objectives and stop the enemy from making significant progress. Doing this increases your advantage for subsequent rounds, such as shortening vehicle spawning times, and small narrative blurbs help to give you a sense of the stakes for each fight. A town hammered by German planes after one round can be torn to shreds in the next one, making it almost unrecognizable, and with Grand Operations taking around an hour to complete from start to finish, you feel like you have some skin in the game by the conclusion.

With the lengthy playing time, however, comes the possibility for disappointment, and this is caused far too often by Battlefield V rather than your own abilities. One extremely close match was supposed to end with the player-count and timer both at zero but failed to do so. We were left with no other option but to quit entirely. Other times, textures took too long to load, the rumble in our controller stopped working, or we were inexplicably unable to spawn. After we did quit, it took an alarmingly long amount of time just to return to the main menu. None of these issues straight-up ruined the multiplayer experience, but they felt like they probably could have been avoided if the game had a month or two longer to cook.

It’s a little remarkable that Black Ops 4 feels like it has more to offer even though it nixed its campaign.

That feeling is reinforced when looking at what isn’t in the game yet. Battlefield V will get its live service component, Tides of War, in December, but we’ll have to wait until 2019 to play the battle royale mode, Firestorm. All future maps will be free and the game will only use microtransactions for cosmetic items, but it’s a little remarkable that Call of Duty: Black Ops 4 feels like it has more to offer even though it nixed its campaign entirely this year.

Battlefield V is a fine World War II shooter and it has the potential to turn into a great one with a few updates and the addition of its post-launch modes, but with Black Ops 4 providing such a rich and engaging competitive experience and last year’s Wolfenstein II: The New Colossus offering a better (and more upfront) Nazi-shooting campaign, there’s little reason for this game to be your first choice. That’s partially a testament to the strength of its competition, but Battlefield V fails to impress the same way Battlefield 1 did. By all means, give it a try if you’re a fan of DICE’s previous work, but know that you’ll have to put up with some pretty glaring faults.

Yes. Battlefield 1 and Call of Duty: Black Ops 4 are both more consistent games.

War Stories will only take you a few hours to complete. The competitive multiplayer will last a lot longer, particularly as new maps are added for free.

Yes, but only if you are dying to return to World War II. There are other multiplayer shooters with more polish to choose from.

How to use Microsoft Edge efficiency mode