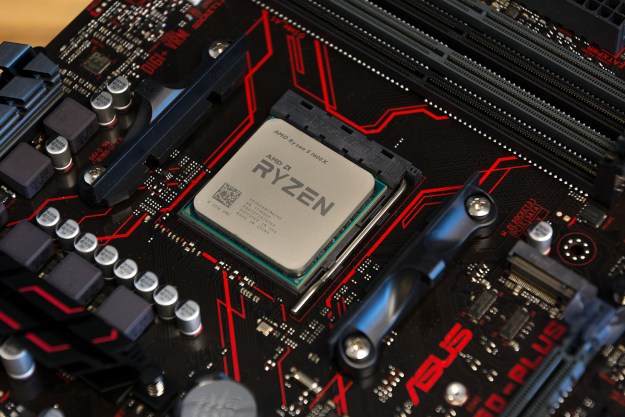 The $250-$350 price point is growing increasingly crowded as AMD merrily rolls out Ryzen. These enthusiast level chips, used primarily in gaming systems, won’t hold back a single GPU setup, and are very capable of light photo or video production work in a pinch.

The Ryzen 5 1600X stands out as the least expensive chip to ever offer more than four cores. At $250, it undercuts the Core i7-7700K by almost a hundred dollars at full price, and is only $20 more than the Core i5-7600K. As attractive as Ryzen 7 was, it’s the Ryzen 5 processor line that fits in the budget of most PC enthusiasts. Can it become the people’s champion?

A refresher on the architecture

The mid-range Ryzen 5 Series is the second to arrive with AMD’s new Zen architecture. The red team started over from the ground up for these chips, and it really shows. The previous design, Bulldozer, set AMD back by pushing core count in exchange for per-core efficiency. With most games and demanding applications only making use of four cores, there wasn’t a big incentive to take the offer.

For more information on the Zen architecture and platform, head over to our review of the flagship chip, the Ryzen 7 1800X.

Though its 3.6GHz base clock is only slightly higher than the Ryzen 5 1500X’s 3.5GHz clock, the Ryzen 5 1600X has two distinct advantages over its slightly cheaper sibling. Most notably, the Ryzen 5 1600X sports two more cores for a total of six, which brings it to support for 12 threads (two on each core). It also has a 95-watt thermal design power, as opposed to the 65-watt TDP on the 1500X. Theoretically, that thermal headroom may allow for better overall performance due to higher dynamic clock speeds.

Those two factors give the chip a massive advantage, bringing multi-core tests in line with even the Ryzen 7 1700. It takes a strong lead over the Ryzen 5 1500X in every single test — not bad considering it only costs $30 more. Still, that big performance jump is a pleasant surprise. In particular, we see a big gain in the Handbrake 4K conversion test, which runs almost 35 percent faster on the higher-end chip than on the entry-level option.

It should come as no surprise that the Intel Core i7-7700K, with its 4.2GHz base clock, charges ahead in every single-core test. The exchange comes with the extra cores, where well-distributed workloads can take full advantage of the extra threads. Tasks that use all of the Ryzen 5 1600X cores tend to perform better than on the Core i7-7700K, despite the latter’s price, which is about $90 higher.

We did not have a Core i5-7600K on hand to test. However, we expect that it would maintain a lead in single-core tests, at the cost of a major defeat in multi-core tests. The Core i5-7600K does not have Hyper-Threading, which means its four cores can each handle only one processing thread. The 1600X, meanwhile, can handle 12 threads.

Overall, the Ryzen 5 1600X packs a lot of performance into a slimmed-down price point. Its numerous cores and threads may not matter in all situations, but they matter a lot in some. And the 1600X’s disadvantage in single-core performance isn’t so drastic that that it becomes uncompetitive with Intel’s hardware.

Mid-range enthusiast hardware is often built for gaming. It’s a demanding task, and one that requires the right balance of performance across many components. We hooked up both an EVGA SC GTX 980 Ti and an AMD Radeon RX 480, and ran the internal benchmarks in For Honor and Sid Meier’s Civilization VI, as well as the 3DMark Time Spy test, the latter two of which were run in DirectX 12.

The GPU is always the biggest factor in most modern games, and none of the CPUs in our test results should limit a single-GPU setup, particularly with our mid-to-high performance test cards. For Honor demonstrates that, as the gap between worst performance and best performance is less than 10 percent. A difference that’s likely to go unnoticeable.

Sid Meier’s Civilization VI is a different story. It puts a lot more strain on the CPU than most games, and the differences between the chips are clearer. The Ryzen 5 1600X sets itself apart from the less expensive 1500X once again, particularly with the graphics turned to extreme, where it only falls in second to the Intel Core i7-7700K system.

The extra cores and power also come in handy running the 3DMark Time Spy benchmark. The final score takes CPU performance into account to an extent, and the Ryzen 5 1600X falls, once again, closer to the Ryzen 7 chips than the Ryzen 5 1500X.

Overall, there’s little to no risk of the Ryzen 5 1600X holding back performance in most modern titles, unless they’re particularly demanding for the CPU. It’s clear that the 1600X is not the fastest gaming processor around, but its price easily excuses its minor disadvantage compared to Intel hardware.

We tested the Ryzen 5 1600X with the AMD Wraith Max cooler. It had a modest sized fan atop a generous heatsink, turned on its side to keep a low profile. There was even an RGB ring around the interior edge of the fan — fancy!

Ryzen chips come out of the box in normal mode, with XFR enabled, and automatic voltage regulation. A bevy of sensors runs a quick check of the thermal and power limitations on the chip, and sets the clock speed of the chip accordingly. With our 750 Watt power supply, X370 chipset, and Wraith Max cooler, it ran at 3.7GHz base, 100MHz over its base clock. When Ryzen Master adjusts the settings on the chip, it disables XFR and automatic voltage regulation in favor of user settings.

Overclocking is easy thanks to the Ryzen Master software. It allows users to tweak clock speeds, voltages, shut off cores, and load all the settings into presets that are easy to flip between without resetting the system. We pushed the Ryzen 5 1600X from its base clock to 3.9GHz with a bump to 1.4 volts on the chip, and 1.0V on the chipset.

Overclocking provided some benefits in our tests, but not nearly the kind of stunning boosted performance we saw on the Ryzen 7 1700. The downsides, at least with a stock cooler, seem to outweigh the benefits. Disabling XFR prevents potentially higher clock speeds during single-core tests, and temperatures were much lower, and more consistent, without enabling the overclock mode.

Unless fit it with an aftermarket cooler, you’re better off leaving it in normal mode, unless there’s a specific situation that necessitates turning off cores temporarily.

AMD covers the Ryzen 5 1600X with an industry standard three-year warranty. That doesn’t cover damage due to installation issues or improper overclocking, so make sure to handle with care.

AMD continues to strike at Intel’s most popular chips with the Ryzen series, and the Ryzen 5 1600X renders a powerful cleave to the unlocked enthusiast Intel Core i5 and Core i7 chips. Packing competitive performance, extra cores, and a modern feature set into a $250 price point is no small feat, but the red team has taken on the challenge with noteworthy success.

Within AMD’s own ranks, the Ryzen 5 1500X sits at just $190, with a lower 65W TDP and only four cores. The performance doesn’t keep up with this chip though, and the minor savings it offers isn’t worthwhile. Intel offers the Core i5-7600K for $20 less, but with the Ryzen 5 1600X falling so close to the Intel Core i7-7700K in terms of performance, AMD’s six-core option is worth considering.

With six cores and a modern feature set, the Ryzen 5 1600X is built to last. Six cores may not mean as much now, but if multi-core reliance increases, this chip will be sitting pretty. AMD has also promised to continue using the AM4 socket at least through 2020, so you have a clear upgrade path a few years down the line.

Yes. Whether you’re encoding video, streaming and recording while gaming, or compressing and uncompressing large files, you’ll see a benefit from the extra cores and higher power draw on the Ryzen 5 1600X. Add that to a precisely targeted price point, and the result is a mid-range champion that’ll appeal to just about everyone looking to put together a powerful, yet affordable, PC.

AMD rips melting RTX 4090 adapter as Nvidia faces down class-action lawsuit
This new AMD feature can boost your games with one click
AMD finally shares new RX 7900 XTX benchmarks, and it’s not all good news
The best RAM for AMD Ryzen in 2022
This stunning DIY gaming PC dream machine is made of glass
Apple will pay $50M to settle the butterfly keyboard fiasco
This 15-inch Windows laptop is a great buy while it’s just $139
Get Samsung’s 49-inch Odyssey G9 Monitor for under $1,000 today
Why Starlink download speeds are experiencing double-digit dips
Hackers just stole LastPass data, but your passwords are safe
Best Chromebook deals: Get a new laptop from $99
Best laptop deals: Save on Apple, Dell, HP and Lenovo
Best MacBook deals: Save on MacBook Air and MacBook Pro