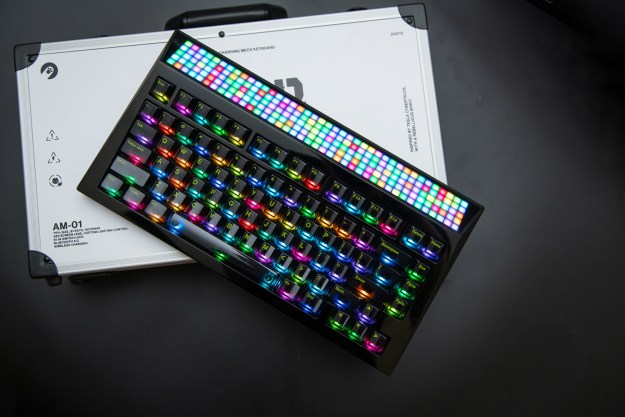 “If you want a keyboard unlike any other, the Cyberboard R2 is for you -- assuming you can afford it.”

Angry Miao released the Cyberboard R2 over a year ago, at least in spirit. Incredibly low yield rates and unprecedented demand forced the Chinese tech-fashion brand to cancel the project — but after over 400 days of waiting, the Cyberboard R2 Le Smoking marks a comeback. It’s easily one of the best keyboards you can buy, assuming the nauseatingly high price tag of at least $670 doesn’t immediately turn you away.

Redesigned and coming on July 10 (at 8 p.m. PT in case you want to get that F5 key ready), the Cyberboard R2 Le Smoking is finally getting its time to shine, and that’s a great thing. If you missed out on the Wes Anderson-inspired Cyberboard R3, you have another chance to pick up one of the most unique keyboards that money can buy. And it’s also a damn good one.

You’d think design is everything for the Cyberboard R2 Le Smoking, but the sublime typing experience takes center stage. That doesn’t mean the keyboard isn’t a looker, though. With an aggressively angular design and the signature LED grid on the back, the R2 Le Smoking might be the most unique keyboard you’ve ever seen.

As the name implies, the R2 Le Smoking is inspired by the Le Smoking suit from Saint Laurent — a similarly angled and agile-looking suit the brand debuted in 1966. Without a doubt, the resemblance is there. Four angled edges give it a retro-futuristic look that somehow manages to feel empowered and petite at the same time; just like the suit that inspired it.

Even after almost two weeks of using the Cyberboard R2, I’m still surprised by how premium it feels.

It’s far from a petite keyboard, though. This is probably the heaviest keyboard you’ll ever encounter, weighing in over seven pounds with a full set of switches and keycaps. The weight comes from a bevy of extras in the board — both an aluminum body and plate, three separate PCBs, and a built-in wireless charging connector.

It also comes from the massive 200 LED grid on the back of the keyboard. You can do just about anything with the array — I went with a Tetris animation that was available on Angry Miao’s website. That includes custom animations, static colors, and useful information like the time and your battery life, as well as an indicator for which Bluetooth connection you’re using.

The build quality is unmatched, making traditionally premium keyboards like the Logitech G915 TKL feel like bargain bin options by comparison. Even after almost two weeks of using the Cyberboard R2 as my daily driver, I’m still surprised by just how premium it feels.

The Cyerboard R2 Le Smoking has two connections — USB-C or Bluetooth. The USB-C connection is the fastest and what I used throughout  testing, despite the fact that Angry Miao doesn’t include a cable in the box. I have to assume anyone spending $700 on a keyboard has at least a few spare USB-C cables, but an extra wouldn’t hurt.

Bluetooth works across three devices, which you can swap between with ease using Fn + 1, 2, or 3. The LED grid lights up to show which connection you’re using, and you can keep all three devices paired at once. Windows is the only supported OS — there’s no toggle for a MacOS layout like on the KeyChron Q1 — but I don’t imagine too many folks will be carrying the Cyberboard R2 around with an Android tablet.

With a wireless charging mouse pad, you never need to worry about topping off your battery.

Although it’s easy to pair Bluetooth devices, it’s unintuitive. Unlike mainstream keyboards like the SteelSeries Apex Pro Mini Wireless, the R2 offers no toggle switch. Instead, it automatically switches to Bluetooth when you unplug it. It’s strange when you’re getting set up, especially with no “on” switch anywhere around the board.

Battery life goes quick with the LEDs blaring — I dropped about 10% over the course of a couple of hours — but it’s not too big of an issue. The R2 Le Smoking has a wireless charging pad built into the bottom of the keyboard that will kick in whenever the battery reaches 85%. With a wireless charging mouse pad, you never need to worry about topping off, and you don’t need to fret about wearing out the battery, as the pad switches off when it’s full.

You can completely disassemble the Cyberboard R2 Le Smoking and swap out the switches and keycaps, but the base keyboard kit doesn’t come with either; you need to bring your own. The bundle, which is about $150 more expensive at $823, comes with Gateron Ink Black linear switches and Angry Miao’s Glacier keycaps, and it’s a winning combination.

Ink Black switches are heavy, requiring 60 grams of force compared to 45 grams on a traditional Red linear switch. That makes them ultra-smooth for typing, especially if you like to slam on your keys like I do. The sound is smooth and on the high end of hollow, and I found myself randomly typing sentences into my search bar just to hear the keyboard in action a little more.

The gasket mount makes it feel like you’re hammering away on a cloud.

Although you can swap in any switches you want, it’s not the seamless process you’d find on a mainstream keyboard like the Asus ROG Strix Flare II. And for good reason. Unlike most cheaper keyboards that use a top mount where the switch plate is directly on top of the rest of the frame, the R2 Le Smoking uses a gasket mount.

The difference is that a small bit of material sits in between the switch plate and the rest of the frame, and it makes a world of difference for typing. You’ll never actually feel the plate moving, but the microscopic give and take it offers when typing makes it feel like you’re hammering away on a cloud. Consequently, it also means you’ll need to disassemble the keyboard to swap out switches. That trade-off is well worth it.

If you’re looking for the best gaming keyboard, the Cyberboard R2 Le Smoking isn’t it — and I wouldn’t have it any other way. It’s too bulky to move into a comfortable position, the bundled switches are too heavy for twitch reactions, and the keycaps don’t grip on your fingers due  their glossy acrylic finish. I’m happy that’s the case, though.

The typing experience is too good, especially with the Ink Black switches. Out of all of the keyboards I’ve reviewed and used, this is the first time ever that I’ve brought friends into my office and said “you’ve got to try this.”

A lot of your experience will come down to the switches and keycaps you use, but the Cyberboard R2 sets you up for success with its gasket mount. Unfortunately, different switches don’t fix the issues with gaming. Moving the keyboard around is a hassle due to how heavy it is, and slamming your thumb against the frame with a quick mouse flick is a fast way to a bruise.

I like using it for keyboard-only games like The Binding of Issac, though, and I tried to get it working in my beloved Destiny 2 just because of how great the keyboard feels. Still, if you’re primarily a gamer, save yourself the hassle (and money) and get something like the Razer Huntsman Mini. This is a typing keyboard, despite its retro-futuristic aesthetic.

Software needs to power hardware, and that’s not the case for the Cyberboard R2. Instead of a dedicated lighting and macro program like you have with the Corsair K70 RGB Pro, you have to design your effects on Angry Miao’s website, download a file, and then load it into the keyboard. You can’t see updates in real time, and you have to sign in to download community files.

This is a bad system, especially when Angry Miao’s website is prone to slowdowns and crashes. You’re given a lot of options — three lighting layers on the LED grid including animation support, automatic translation of images into the grid, and endless remapping layers — but the trial and error of even getting the website to work will sap your desire to experiment.

Angry Miao has the right idea with community-driven effects — I spotted an image of Gengar that I loved within a minute — but the system for installing the effects holds back any community efforts.

The good news is that Angry Miao increased the number of custom lighting slots to three over the original design, and the editor is powerful enough to offer unique, vibrant animations. I just wish it was a bit easier to explore.

Should you spend $700 for a keyboard? No, there’s no reason to. The Cyberboard R2 Le Smoking is beyond the point of diminishing returns, and you can get something just as nice for less money (especially if you build your own keyboard). What you can’t get is the remarkable design, exceptional build quality, and clear attention to detail that went into the Cyberboard R2 Le Smoking, and for staunch keyboard enthusiasts, it’s money well spent.

There are counterfeit Cyberboard models floating around the internet, but nothing that matches the unique look and build of the Cyberboard R2 Le Smoking.

As a custom keyboard that you build yourself, the Cyberboard R2 Le Smoking is just a base that you can continue to customize and improve over time. It will last as long as you want it to.

Yes, but only if you’re deeply embedded in the world of custom mechanical keyboards. Customizing isn’t for the faint of heart, and the price is obscenely high compared to mainstream options. In short, you don’t need this keyboard. It’s just a matter of if you want it.

VR gaming appears to have hit an all-time high