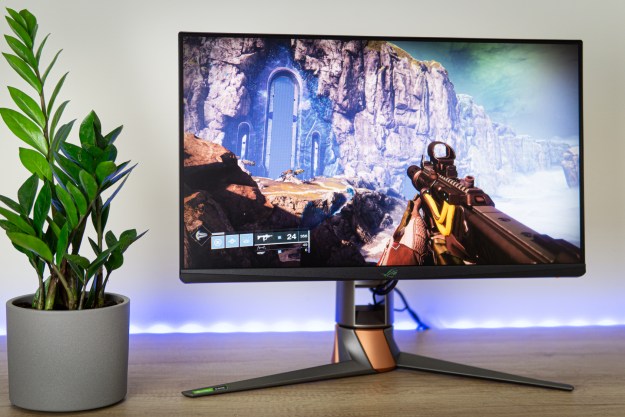 Asus’ new ROG Swift PG259QNR might just fit your bill. Be warned, however, that this monitor is a one-trick pony that’s meant for only the most competitive of gamers, thanks to its ultraquick 360Hz, 1080p display.

Being a monitor that’s built for competitive gameplay, there are two aspects that stand out. First and foremost, it’s not very big at just 24.5 inches diagonally. More importantly, the stand is built like a tank.

You might not think it matters much, and while I normally would agree with you, competitive gameplay ends up being quite a physical activity. From fast mouse movements to rapidly slamming the keyboard, your motions can jolt your desk, and the vast majority of monitors will wobble like fresh Jell-O.

But not the PG259QNR. The stand Asus built for this display absolutely plants it on your desk, and won’t let it budge no matter how aggressive you get with your gameplay.

For those that don’t like a big stand, the display also comes with a desk clamp to replace the funky stand, as most monitor arms will again allow too much wobble. As such, we can’t fault it for not supporting VESA mounts.

Whichever you choose to use, the stand offers a full range of adjustments including height, tilt, rotate to portrait, and swiveling, which is impressive if you consider the stability of the monitor. Of course, rotating to portrait isn’t essential, but it’s helpful when plugging the cables in after routing them through the stand.

The ROG Swift 360Hz is not afraid to take a stance.

There is no curve to this display, and its 24.5-inch size may seem small to some gamers. For competitive folks, though, it allows them to get all the game into view without head movement. If you’ve ever wondered why 24-inch monitors are popular at tournaments, well, now you know.

All things considered, this is one of the most aggressively styled displays I have seen, with tons of accents and a huge RGB LIT Asus ROG logo at the back that gobbles up a quarter of the real estate.

There’s not a ton of connectivity to be found on the PG259QNR, but then again, there doesn’t need to be. You’ll want to use the DisplayPort 1.4a interface to get the most out of this monitor, as the HDMI 2.0 port will limit the maximum refresh rate to “only” 240 Hz instead of the full 360 Hz. DisplayPort also enables G-Sync at 1 Hz through 360 Hz, which is the widest range I’ve seen on a monitor.

Next to those two inputs, there is a power jack that is fed by a small, 90-watt external power brick. There’s also a headphone jack and a two-port USB hub with one upstream connection to your PC.

Asus’ on-screen display (OSD) isn’t the most attractive, but it’s functional and extremely easy to navigate. The monitor has one main directional toggle that brings up the main menu when interacted with in any way. This menu has segments for enabling Nvidia Reflex Analyzer, a gaming menu with settings related to gaming such as an FPS counter, cheating crosshair, dark boost, overdrive settings, and more.

Naturally, there are also settings for adjusting brightness, contrast, and color, as well as options for shortcuts, lighting effects, and general monitor settings.

When it comes to image quality, you may question why the display doesn’t come as a QHD monitor. After all, 1080p isn’t very sharp, and today’s GPUs should be strong enough to power popular e-sports titles at high frame rates at QHD.

There’s a simple reason: Bandwidth. DisplayPort 1.4a offers just enough bandwidth to push 1080p over to the monitor at 360Hz, and until we get a new interface or a manufacturer implements DSC (display stream compression), 1080p will be the cap when you want a 360Hz monitor. Nevertheless, because the panel isn’t very big, the image still looks reasonably sharp.

Asus equipped the PG259QNR with an IPS panel, which means viewing angles are excellent. Light bleed and IPS glow is minimal on our sample, and much better than on curved ultrawide monitors. The PG259QNR produces a very consistent, uniform, clean image.

But where IPS usually produces stellar colors, it seems some sacrifices had to be made with this panel. It’s not terrible by any stretch of the imagination, but with coverage of 98% of the sRGB space and 73 percent of the AdobeRGB and DCI-P3 spaces, as tested with our Spyder X Elite, it’s not going to blow you away with vivid, rich colors.

We also tested its color accuracy, which resulted in a Delta-E (difference from real) of 2.12 in the standard “Racing” mode, with the sRGB profile earning a better result of 1.68. Note that sRGB mode disables the brightness controls, instead using the built-in light sensor to dictate brightness.

Oddly, both these figures are worse than the calibration report that Asus provides, which notes a Delta-E of 0.53, but this might be due to different equipment and testing conditions. Either way, the PG259QNR produces accurate colors, so you can use it for nonprofessional color grading if need be.

The Asus PG259QNR overdelivers in brightness and contrast performance.

Where the display does stand out is in its brightness and contrast performance. Asus claims a brightness of 400 cd/m2, but our sample exceeded 415 cd/m2. The panel also exceeded its quoted contrast ratio, with a contrast of 1200:1, which is an impressive performance for an IPS panel. The white point was exactly at 6500K, which is great.

We calibrated the monitor to see if we could improve its performance, but achieved few gains. Only the color accuracy was improved to 1.35, so calibrating the PG259QNR can lead to some gains.

But let’s be honest, you’re not buying this monitor for its ability to reproduce colors anyway, and its color reproduction is more than adequate for competitive gameplay. Given this monitor’s focus on raw refresh rate, Asus could have let color accuracy and contrast slide — but thankfully, it didn’t.

Time to get down to brass tacks and talk about what really matters — gaming performance. On that front, the PG259QNR is in home territory with a mind-boggling 360Hz refresh rate. You’re probably wondering why you need 360Hz, and whether you will be able to tell the difference.

360Hz isn’t about fluidity and smoothness. It’s about reducing latency

If you’re not a competitive gamer, this monitor isn’t for you. The jump from 144Hz to 360Hz requires a trained eye to see, but 360Hz isn’t really about increasing fluidity and smoothness. Rather, the point of this insanely high refresh rate is to reduce latency, so that you can see the enemy before he can see you. The difference is mere milliseconds (we’re talking less than 10 milliseconds versus a 144Hz display), but that’s a lot in the world of competitive gaming.

Now, I’m not a competitive gamer (I simply don’t have the time or skill), but I asked a skilled friend have a go at this monitor, in Counter-Strike: Global Offensive, and you should have seen the grin on his face. He landed shot, after shot, after shot, and definitely felt like a better gamer compared to when he uses his 144Hz panel. The PG259QNR is for when you want to know that the only thing holding you back is your skill.

This monitor is so fast, the only thing that will hold you back is your skill.

There is one thing to consider when considering this display. We tested it on a PC with an AMD Ryzen 9 3900X and an Nvidia RTX 2080 Super graphics card. However, when we fired up Destiny 2, the highest frame rate this system managed was about 170 FPS, with the graphics at lowest settings. Even in CS:GO, we only occasionally jumped over about 300 FPS.

If you are considering buying this display, ensure your system has a processor that has very powerful single-core performance.

So I had a look at task manager to see what was happening, and this confirmed my suspicions. The CPU was bottlenecking the system, as only a few cores were working near 100%, with the graphics card running at about 70 or 80 percent duty, often even less. I picked the 3900X for its multi-core performance, but in single-core, it isn’t as powerful as Intel’s alternatives, and that’s what games rely on to produce really high frame rates at low resolutions such as these.

So, if you buy this display, do ensure you have a processor like Intel’s Core i9-9900K, Core i9-10900K, or wait for AMD’s Ryzen 5000 CPUs, as these are expected to deliver staggering single-core performance.

As I said, the PG259QNR is all about latency, which is why it comes packing Nvidia’s Reflex Analyzer technology. This is essentially an extension of the G-Sync module that allows you to measure the time from click to display, which paired with the right hardware, can numerically show you the benefits from a faster display. We tested the feature using Destiny 2 and Asus’ ROG Chakram Core mouse. (You should note that not a lot of games are currently supported.)

You use it by connecting the monitor up to your PC with DisplayPort and the USB hub, and then plugging the compatible mouse into the monitor’s red USB port. This allows the monitor to detect when you click. Then, through the monitor’s OSD, you enable Reflex Analyzer, which brings up a detection rectangle that you place over your gun’s trigger, nozzle, or whichever part of it responds first, so the monitor can detect when your click translates to on-screen visible changes.

Nvidia Reflex Analyzer gives you the assurance that you’re seeing your actions as quickly as possible.

Using this in Destiny 2 at minimum settings, we achieved a response time of about 14 milliseconds. Raising the settings to highest made this number climb to about 21ms. This isn’t a huge difference, but it can be the difference between a landing a shot, or getting shot. We couldn’t run these tests in CS:GO, as the game is not compatible.

However, if you’re not running an RTX 2080 Super, but a GTX 16-series card, you’ll see longer latency. The same goes for other factors such as graphics settings or background tasks that might reduce your frame rate. In the end, it’s just a tool that allows you to see the true latency benefits from upgrading your system or changing game settings, instead of estimating latency based on your frame rate.

Asus’ ROG Swift 360Hz PG259QNR is an extremely fast gaming monitor that puts the entire view in a relatively small panel to ensure you can see everything at once. With 360Hz and 1ms response times, its built to ensure you see and shoot the enemy before he sees you, which can help give you the edge in competitive online gaming.

But priced at $699 for the variant without the C-clamp and Reflex Analyzer, the PG259QNR isn’t affordable, so you’ll have to ask yourself whether you need a monitor that’s this fast, or whether you prefer something more immersive like an Ultrawide display.

Yes. MSI is set to launch its Oculux NXG253R monitor in November that features similar specs at $799, and Acer built the Predator X25, which also has a 360 Hz panel. If you don’t mind dropping down to 240Hz to save some serious cash, Dell’s Alienware 25 is a great option at about half the price.

Asus’ PG259QNR should last as long as any monitor does — a minimum of five years. But if you’re using it for competitive gameplay, don’t be surprised if something even faster pops up in the e-sports space.

Yes. It’s not for everyone, but the Asus ROG Swift 360Hz PG259QNR absolutely raises the bar for competitive gaming monitors, and it does so while avoiding any major problems that might spoil the fun.